Like any hobby, gaming has its trends. Every so often a particular theme captures the playing public’s imagination and game shop shelves are inundated with new releases about Mars, Vikings or whatever the latest craze may be.

Most recently it seems that nature-themed games might be getting their turn in the spotlight, thanks in large part to the success of Elizabeth Hargrave’s birdwatching smash hit Wingspan. Ducks in Tow is the latest of the bunch. It sees players wandering around a duck sanctuary feeding a variety of feathered friends, and it combines a handful of simple mechanisms with gorgeous physical production in an engaging, accessible and utterly charming blend.

The game sees you and your opponents wandering around a board made up of modular hex-grid tiles. Along the way you’ll use food tokens to attract different breeds of ducks–wooden pieces which fit into a plastic tray trailing behind your player pawn. The visual effect is of a little group waddling along behind you as you make your way from space to space, and it’s impossibly cute.

Collecting ducks isn’t just about warm, fuzzy feelings, though. By taking them to particular places on the board you’ll be able to trade them for location cards, all showing different arrangements of coloured ducks. By lining cards up carefully you’ll be able to form chains which score you points at the end of the game. 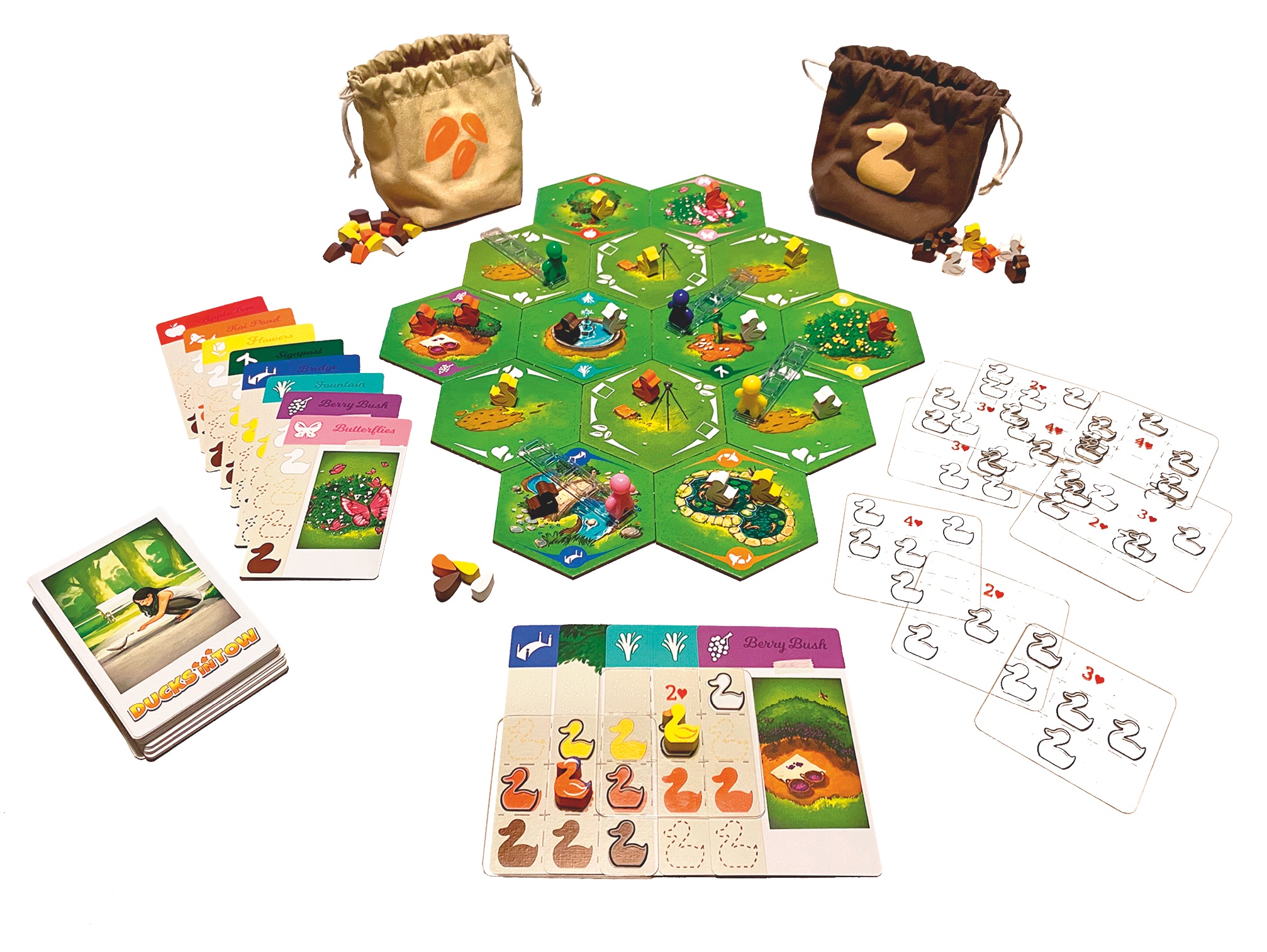 Arranging your cards in high-scoring configurations feels a little like the brainy 2019 card-laying puzzle Vadoran Gardens, but here it’s just one element among several. There’s a touch of pick-up-and-deliver, a smidgen of tableau building and just the slightest hint of antagonism as you aim to grab the ducks you need before your opponent can claim them. The multiple mechanisms in Ducks in Tow are like a subtle mix of spices in a stew–all essential to the flavour, but none used to an overpowering excess.

It means that while there’s plenty to get your head around, no individual element is particularly confusing, making this a game ideally pitched at families and casual players who have a little bit of experience with “gateway” games and are looking for the next rung on the ladder–something a little more involved but not massively more complex.

What really stands out, though, is the wonderful integration between theme, artwork and production. Ducks in Tow’s box art perfectly sums up its mood: cheerful, playful and relaxed. Its wooden pieces, rough-textured cloth bags and transparent overlay cards are a visual and tactile treat. In truth, its straightforward gameplay won’t leave much to discover after a couple of plays, but its aesthetic appeal is enough to ensure you’ll want to keep bringing it to the table.

In a hobby drowning in zombies, Cthulhu monsters and hulking dudes with swords, this is a wholesome breath of fresh air. Hopefully it’s part of a nature-loving trend that will continue for a long while to come.

Mechanically it’s a very different game, but Ducks in Tow has the same blend of light-to-medium strategy, cute theme and pretty components.