A circus of horrors with big top energy

Roll up, roll up! Welcome to the macabre world of Dreadful Circus, in which you play as rival ringmasters who apparently have all decided to roll into town on the same day, and then for some reason proceed to auction off acts to one another, all in a bid to be the greatest show on earth.

The theme of this game manages to be both beautifully realised and completely at odds with what you actually do at the table. The monochrome line art of different circus acts is flavourful and evocative, and the bold colours help differentiate between varying card types. There’s plenty to touch and handle too. Players have their own screens – complete with handy player guides – to hide their money behind, and circus wagons in which they secretly place their bids. All of which serves to create genuine atmosphere – there’s a lovely, creepy vintage carnival vibe that the production brings out perfectly. But then, mechanically, the game isn’t really about that at all. Instead, each round, one or two players are nominated ‘Sellers’, and choose a card from their hand to offer for sale. Then the rest of the players secretly place some combination of coins (which translate directly to victory points at the game’s end) and contracts (which are also worth points but score differently according to type) in their wagon, as a bid on that card. 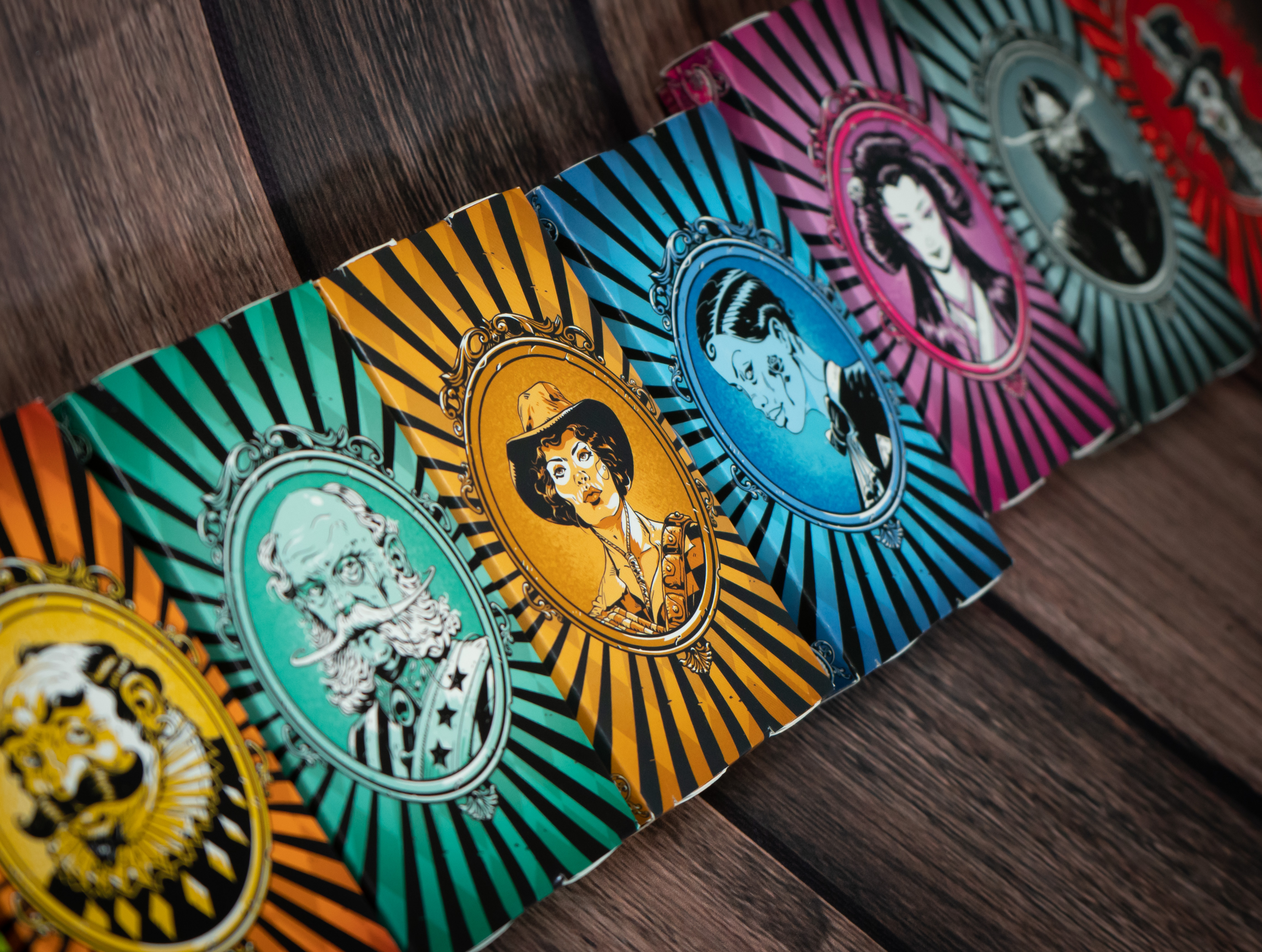 A lovely wrinkle is that the Seller can only inspect these secret bids one at a time, and must choose whether to accept or reject before they get to check the next one. This means the best bid doesn’t always win – the Seller might not even see your bid – and if they look at yours last, their choice is either to take whatever you’ve offered, or get nothing (and lose the card they’re selling). Cards you buy can offer instant or ongoing benefits, or give you victory point bonuses at the end of the game.

If you have the kind of group who enjoy table talk, this set up is the perfect forum for wheedling, bluffing, discrediting your fellow entertainers and generally trying to manipulate Sellers into picking your bid. As with many auction games, you probably need a playthrough to get a sense of what is and isn’t a reasonable bid for certain cards, but given that you can play a whole game in under an hour, that’s no great pressure.

If there’s an issue – and it’s not a massive one – it’s that none of this – the secret bidding, the bluffing, the set collection, the tableau building – feels intrinsically, or even slightly, circusy. It could just as easily – in fact far more easily – have been about buying antiques or a real estate portfolio, or rival gangsters hiring mercenaries. Theme works best when it enhances the stakes by adding a narrative, and helps explain the mechanics by making them intuitive within the logic of the world – so that, in a war game, adding walls to an area gives you a bonus to defence, for example.

Dreadful Circus has none of that. Aside from the mild chaos created by many of the cards using ‘take that’ mechanics to steal from other players’ hands or tableaus, there’s no sense of putting on a show, no audience nor spectacle. The ‘contracts’ are obviously meant to be contracts for your circus to perform in major cities, but that doesn’t really come through in the artwork or rules.

All of which is… fine? Not every game needs to perfectly evoke or simulate the thing on the front of its box. Dreadful Circus is an exciting, occasionally cutthroat game of playing the market and tricking your rivals into bad deals. There’s no catchup mechanic so if you’re repeatedly shunned there’s not much you can do, but it plays quick and there’s plenty of scope for wicked cackles and delicious howls of despair as the Seller gambles and opens the last wagon to discover a single copper coin. All of this at a price that, by modern standards, is pretty darn affordable.

If you like horsetrading while taking a full cutlery drawer of knives to the back, Dreadful Circus is the show for you.

TRY THIS IF YOU LIKED Sheriff of Nottingham

A different game to be sure, but one where you’re continually asking people to trust you who know you have every motivation to attempt to get one over on them.