Charlie also took a look at Doodle Dungeon, see the video below for her alternate (but equally positive!) review and overview:

Your lovely new dungeon is a bit of a fixer-upper. That’s why it was a bargain after all. With a sprinkling of traps, goblins, a feature dragon and… some walls, you’ll have this place knocked up into a lovely palace of death in no time.

Welcome to Doodle Dungeon, a clever roll and write game from Ulrich Blum (Minecraft: Builders & Biomes) with jolly art by John Kovalic. It’s an inventive entry into the dungeon defence genre that sees some clever blending of roll and write tropes with tower defence and roleplaying nods.

Players take their blank dungeon sheet, a pencil, a hero for later, and then begin drafting cards from the central market. These cards instruct players as to what they can add to their dungeon (using the nice little stencils for goblins, orcs, dragons, traps and walls). The goal is initially to create a dungeon that’s going to stand up to rampage of a thoughtless home-invader (the hero) in the third part of the game. Alongside the structural elements of the drafting there’s upgrade options, where you can level up your monsters, traps, hand size (we’ll get to that) and treasure value. You’ll also be wanting to hide any treasure you get under a handy monster, writing down the coordinates secretly on the score sheet. At the end of the game, living monsters and un-looted treasure scores you points. 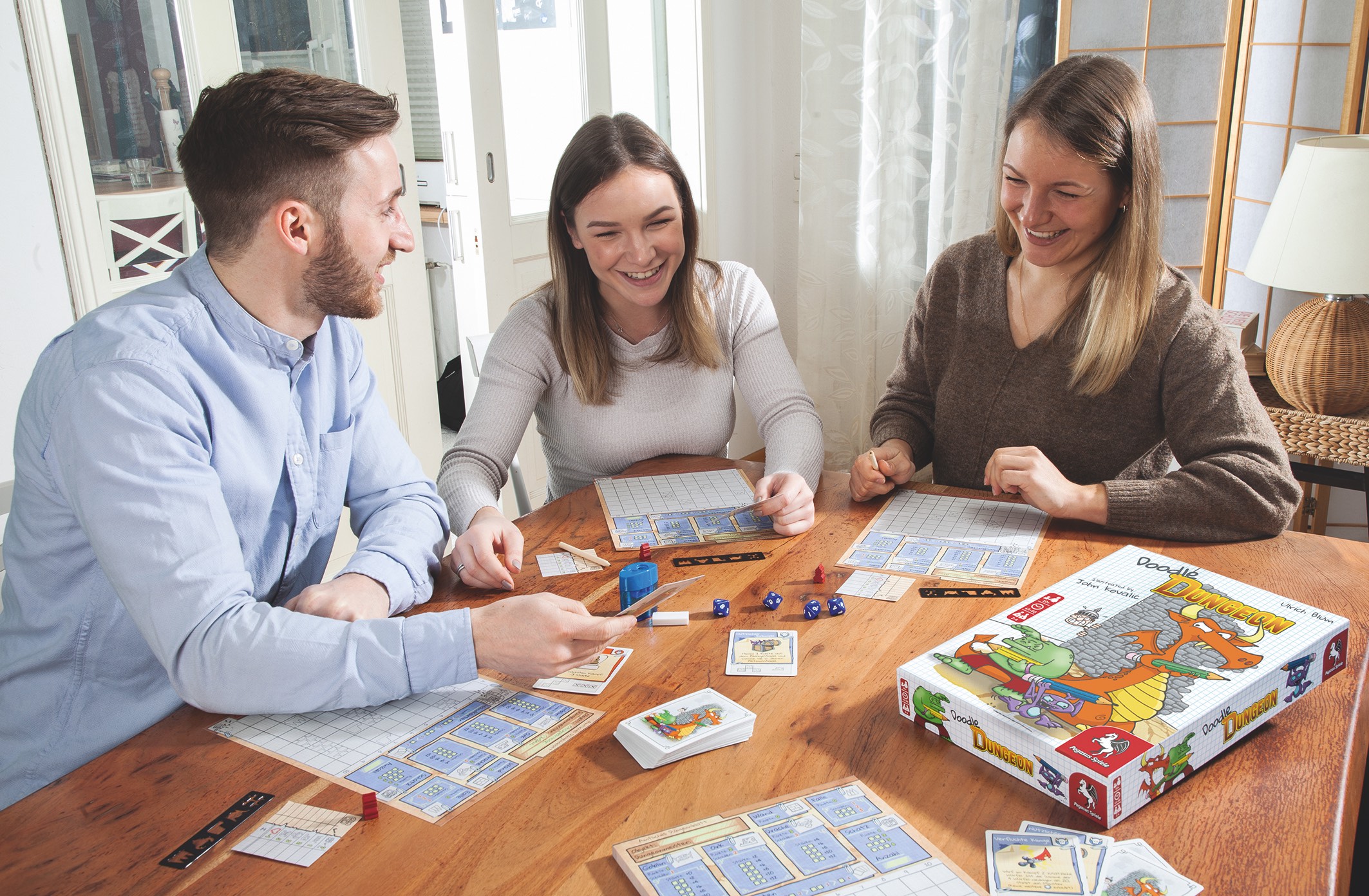 Once you have a nice dungeon planned out, you pass the page to your right, and get that player to draw the hero’s journey through the dungeon. This is then passed back and the defending of your dungeon begins. The hero meeple moves along the line of the route drawn through your dungeon and bumps into whatever is there. Players then roll a dice (in the cast of monster bashing combat) and if the number is more than 20, the hero takes damage. This can be augmented with the cards you’ve been drafting in the first half of the game, which you now draw from as your action deck – up to your hand limit as much as you upgraded it. These give you bonus damage, or improve your rolls. Equally, if you’ve ticked off enough boxes on your orc, they get a roll bonus, making it a bit easier to win these fights, and for said orc to hold on to the treasure it's squatting on.

Players can also drop negative cards on their opponents, causing their hero to heal, or to skip the next trap. This is all important, as the hero’s health will be removed from your score at the end of the game. Once the wrecking of your dungeon by the hero is complete, players tot up their surviving monsters and unsullied treasures and see how it all came out.

And it’s good. There’s something nice about dungeon interior design that has the classic ‘I made this’ satisfaction to it, as well as a  good bit of (fair feeling) interactions to trip other players. Our only real complaint was that it takes a bit longer than we expect roll and writes should. You really have to keep on top of the drafting phase to ensure that the sub-hour game time is met, otherwise it will run on.

Aside from the slightly stretched run time, there’s a draw (geddit?) to Dungeon Doodle that makes you want to come straight back to it again with a different layout, a different routing strategy for the hero you’re piloting, or a different upgrade plan again and again. Plus, it might be the only game we’ve ever seen that comes with a pencil sharpener as its first turn marker.

A brilliant roll and write of dungeon defending that has depths to delve into unseen from the surface.

TRY THIS IF YOU LIKED DELVE…

This cutaway solo dungeon builder also exudes the spirit of Dungeon Keeper, with a bit more freedom as to how you’re creating, and ruining, your lair.