Clever girl – or one big pile of shit?

Make no (dino) bones about it: Dinosaur Island is Jurassic Park: The Board Game in everything but name and Jeff Goldblum.

The rulebook is replete with winking references to Steven Spielberg’s 1993 movie – the introduction even ends with the line “Welcome to Dinosaur Island” – and the rides and attractions with which players fill their own why-didn’t-we-learn-the-first-time theme parks offer gags a plenty: we laughed every time the Clever Grill restaurant appeared. It’s no shock that a game about building a dinosaur theme park can’t resist playing to the crowd, but what is such a surprise is just how bloody good Dinosaur Island is.

Yes, part of the game’s winning combination comes down to its singular look; a distinctive blend of ‘90s neon colours, beautiful illustrations, dinosaur-shaped meeples and a fetching layout of boards that both catches the eye and does a fantastic job of making it easy to keep track of your options during each phase. Yet, inside the shiny amber lurks the DNA of a winning worker-placement game revolving around the need for players to attract ever-increasing crowds to their park without accidentally allowing the dinosaurs to break free and eat the visitors. It’s just not great for PR, you know?

Boosting the excitement level of a park involves harvesting the right DNA to cook up certain dino ‘recipes’, ranging from relatively safe (but dull) herbivores to thrilling (but deadly) carnivores. A pool of dice provides a randomised element to each opening phase, with players competing to gather the right DNA and recipes first using their team of scientists – each of whom has a different research level, making it a tricky decision of when, where and whom to deploy. The head-to-head feeling of being competing park managers trying to outpace your opponents continues into the market phase, which provides the chance to upgrade labs, add attractions and hire a variety of experts (with special abilities).

After the heated first half of each round, the game takes a breather (of sorts) with the placing of workers inside each individual park. With no direct player interaction, it’s a simultaneous affair as each park mixes up their DNA, fills up their paddocks with new dinos and – crucially – invests in boosting their security level to account for the growing threat posed by more and more giant reptiles. The theme may be flashy, but the core here is that of a classic Euro; actions make sense in the logic of being a park manager, sprinkling enough spice to make the dry, strategic meat (hopefully not that of your guests) easy to chew on.

Then comes the big day. Your park opens, visitors flock in and hand over their money (except some pesky hooligans that can randomly sneak in without paying), and you get the satisfaction of seeing those Pachycephalosaurus you cooked up accelerate your park to victory. Only, what’s that? An unused die from the first round pushed your threat level over your security level? Oh no! Now the dinosaurs are loose and eating all the visitors! Down your VP goes. It’s alright; it turns out that the chance of seeing dinosaurs in person is worth the risk, so you’ll be sure to attract more guests next round. At least they pay at the entrance.

Dinosaur Island gets a long way on its concept and look, but the greatest joy is still to be found in its immensely pleasing gameplay. Building up a dinosaur theme park is as rewarding as it sounds, with the DNA of classic Eurogames giving this modern descendant enough to dig into for a long time to come. You can see why those visitors keep coming back – it’s a pleasure to let yourself be utterly consumed.

Classic worker placement gameplay given a few smart modern twists and applied to an irresistible and attractive concept, Dinosaur Island is the meaty Jurassic Park board game you’ve been dreaming of. After careful consideration, we’ve decided to endorse this park. 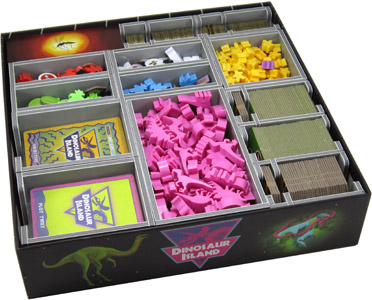