It’s been far too many years since I took my German Language GCSE, but the itch to travel there has never quite left me. You’d think then, that as a result of combining a place I’d like to visit, with a roll and write style game that I generally enjoy, I’d be on to a winner, but in the immortal words of Marie Kondo, Dice Trip: Germany just doesn’t spark joy.

Published by Helvetiq, who are a notable name that have earned a certain amount of goodwill towards any new game, this roll and write is initially, quite lovely. The box it comes in is decently sized, nicely made, and the provided pencils sharp and with erasers (a weird thing to notice, I agree, but roll and writes are generally beholden to their cheap price point, meaning you generally get Argos style blunt pencils at best), and accompanying four quite nice D6s.  The design overall is rather utilitarian, but sticks to its own theming.

The problem seems to be that the functional style translates into the game itself. To play, you’ll roll four dice, to get four numbers. You combine those numbers to create two, two digit numbers, and fill those in on your sheet, before having your fellow players do the same. On the sheet itself is a pastel coloured map that has circles in important cities, and you’ll pop those numbers into your preferred cities to gain the most points.

There are caveats of course, and like any good roll and writes, about ten different ways to score points at all. The easiest to remember and to go by, is that you want to create the longest line of consecutive numbers, but you also have aspects like points for duplicated digit numbers (11, 22, 33, etc), specifically coloured cities, and more. Then there are the penalising rules, where if you don’t want to use numbers, you can choose not to, but must mark a location with a cross. These might help you get a more consistent page, but will also lose you points, working in conjunction with the fact you can’t use the same number twice – though there’s a handy list of numbers at the bottom to cross off as you go. 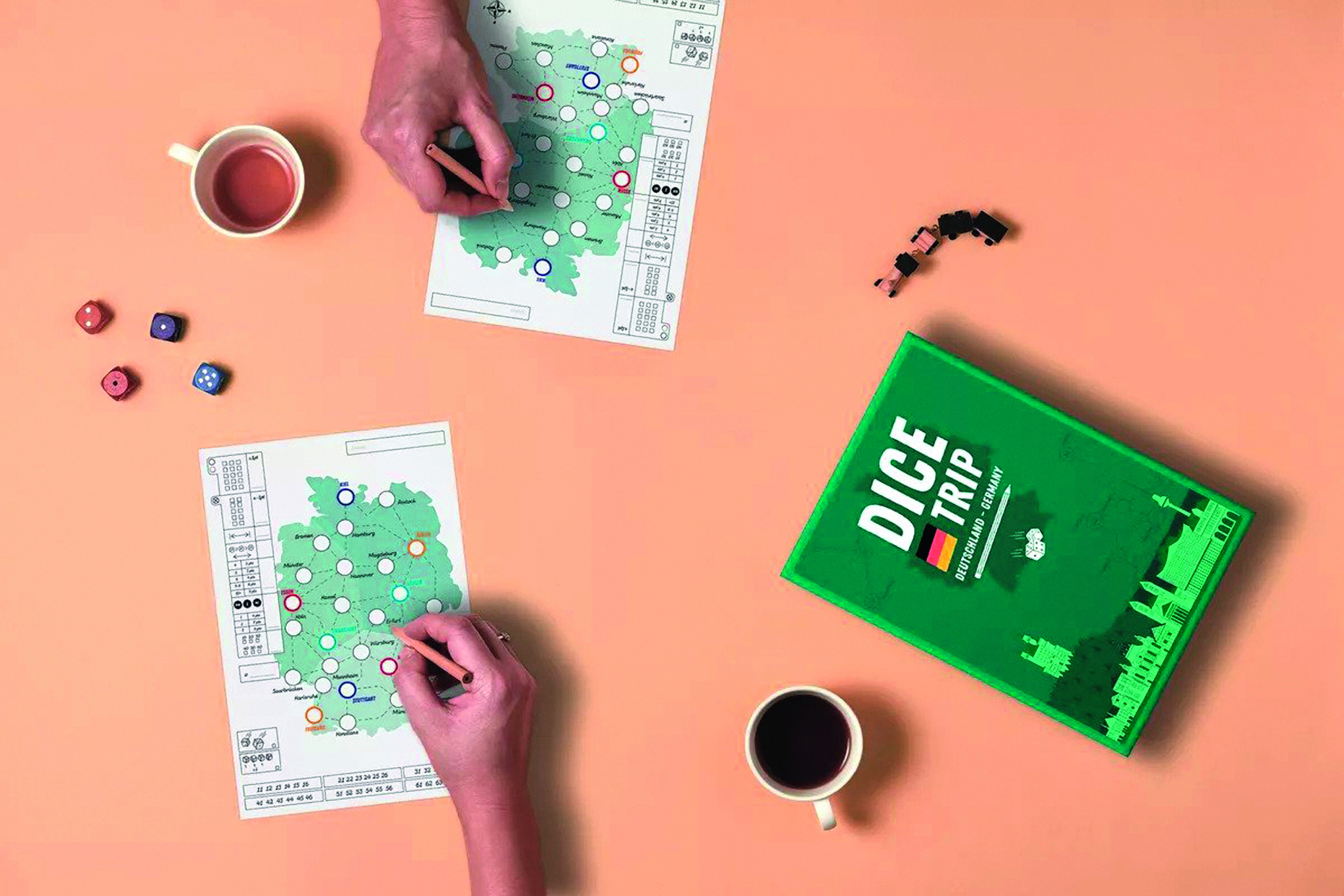 In playing, and later collecting thoughts for the review, the same word kept repeating: “Functional”.

This is a functional game. It does everything a roll and write should. It has different rules, some good, some bad, it lets you work on your own page, and has you complete something.

The difficulty is, that that’s it.

The game borderlines being job-like, and whilst there’s no actual maths in it until you tot up the scores, simply playing a game of higher-or-lower as an adult just doesn’t do it for me. There’s no peril, no real goals you can work together that are destroyed in the draw, and subsequently there’s no excitement. In comparison, something like Trails of Tucana, or Railroad Ink, have you hanging on to every reveal, hoping it will fall into your master plan.

Dice Trip: Germany invokes nothing of the sort. You can’t plan too much ahead, so you’re basically rolling dice and inputting scores. In fact, the most joy I found from this game was in rolling the dice and repeatedly rolling sixes. Whilst that has me question both a) are my dice accidentally weighted? And b) am I using up all of my high roll luck on a game where it’s not needed?

Functional, if not fun.

Low peril, low excitement, brings me back to its functional approach. A box ticked, but little more.

Try this if you liked… Dice Trip: France

If you liked others in the genre, you’ll like this as it’s more of the same.