You can also see Charlie unbox and chat about how to play Detective Charlie by clicking here to visit our YouTube channel, or see the video at the bottom of this review!

It’s no secret that I’m a fan of detective games. Having clearly missed my early calling to be the next Sherlock Holmes, I settle (if gleeful joy can be described as settling) for tabletop games themed on mystery and intrigue. I don my imaginary deerstalker and pick up my imaginary pipe, and I’m on my way. These games – and that’s anything from the Detective Series, to Cantaloop, to Mysterium, to Escape, to Chronicles of Crime (you get the idea) – though fun, are rarely light, and not ones I can share with younger family members. Admittedly, that’s often a plus, but Enter Detective Charlie. A game that encapsulates the best of the theme, but with a delightfully illustrated cat detective, and game play so light it might simply float away – with me happily attached, Mary Poppins style.

The premise is simple – you’re on Mysteryville island, and Charlie Holmes needs you to crack each of the cases. You’re given an event, which takes the centre spot on the board, and evidence cards, which circle it face down. You’ll roll a dice to move Detective Charlie through the evidence cards, which will allow you to absolve suspects, until only one remains. Then, you open the envelope with the culprit and hope that your accusation matches the card contained within. Of course, as with legacy games, if you’re wrong, there’s no real way to fix it. You can only play it once, and then it’s ruined for any further mystery. However, there are six games to play, so the game simply says “Don’t worry, you’ll do better next time.” 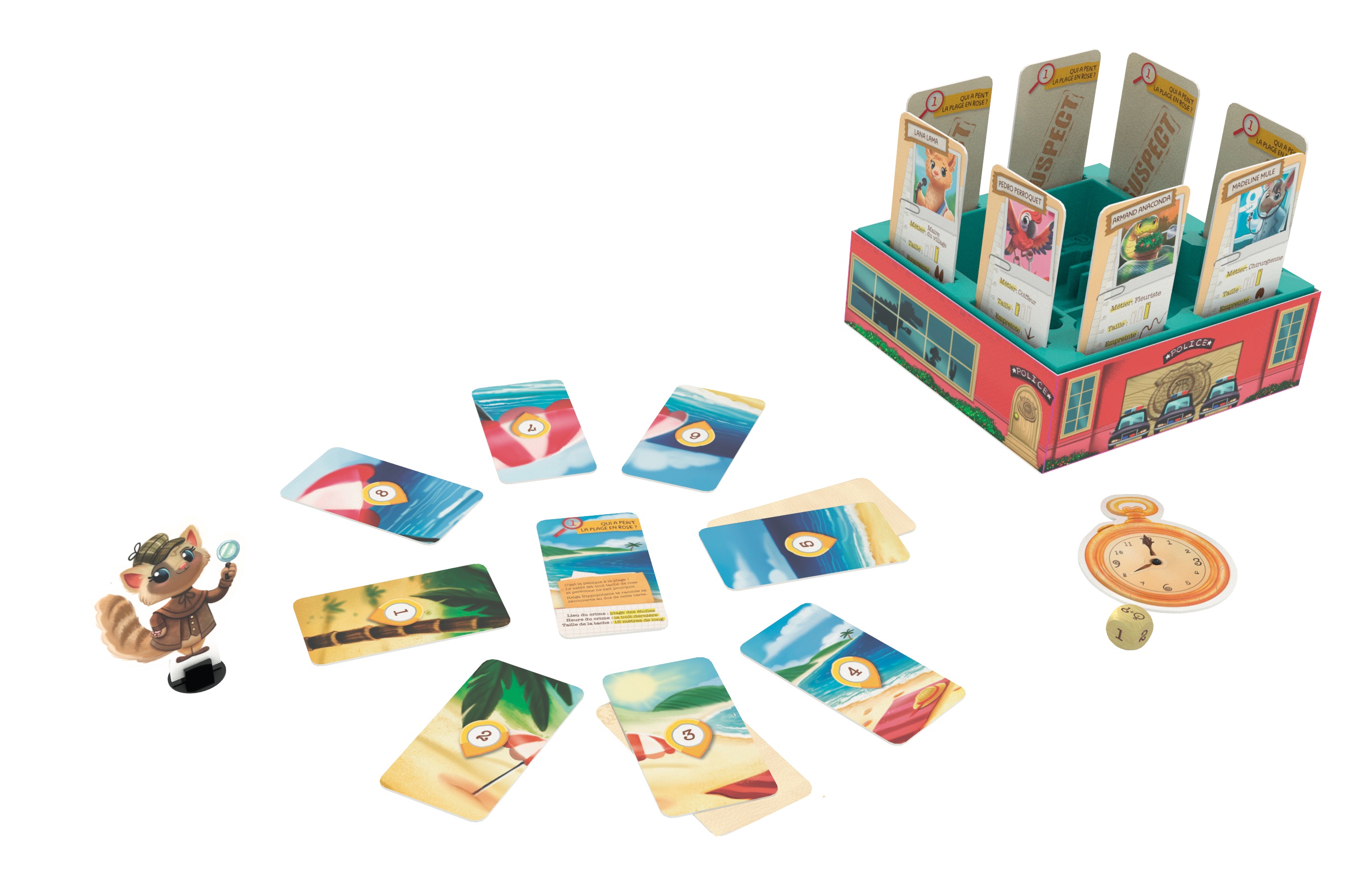 Setting up the game is worth appreciating. The base box itself is illustrated, allowing it to become the police station. The insert that holds the components nicely in place, doubles up as a piece of the game, as it contains slots to hold the suspect cards vertically around it, without extra stands being needed. Doing so means that you can crowd around the table and share the suspects you can see, encouraging communication throughout. It’s a tidy way to do things, making the set up of each game taking less than a minute, and has the benefit of really nicely utilising the box itself.

As the game goes on, each investigation gets a fraction more difficult, and so there might be additional evidence, or ones you have to return to with other spaces having been visited. Although an adult can breeze through them in minutes, they’re absolutely perfect for the younger audience for which the game is intended. To begin with, it’s very much ‘it couldn’t be this character, they were with me!’, but later becomes ‘whose handwriting does this match?’, or ‘the person who wore this can’t have done it’, encouraging a little more lateral thinking. Kids can really get engaged, with only minimal nudging to the correct conclusions.  Plus, the investigations are tailored to the audience, there’s nothing sinister. Far from murder most foul, you’ll be investigating stories of a strangely coloured beach, or a mislabelled package, amongst others.

The investigations can easily be spread over a number of plays depending on how quickly you get through them, and it provides you with a small book to record your closing score for each of them. You obtain this in part from the small pocket watch counter you’re given, which you add an extra turn to as indicated on one of the dice rolls. This is possibly the only part of the game that’s a little superfluous, because unless you go very wrong, you don’t have a great deal of control over it. However, it does act as a way to tie the games together.

Detective Charlie is the kind of kids game that adults want to play with them, and for that reason, I’d call it a purr-fect game to have ready on your shelf.

This is the Detective series, but with childish whimsy

TRY THIS IF YOU LIKED Detective

Detective is basically the adult version of this game, but if you’re playing with children (or just want something light), Detective Charlie is on the case.

PLUS - you can watch Charlie unbox and discuss the game in the below video!

Check out our very first look at Detective Charlie in the below Instagram (and follow us if you aren't already!)