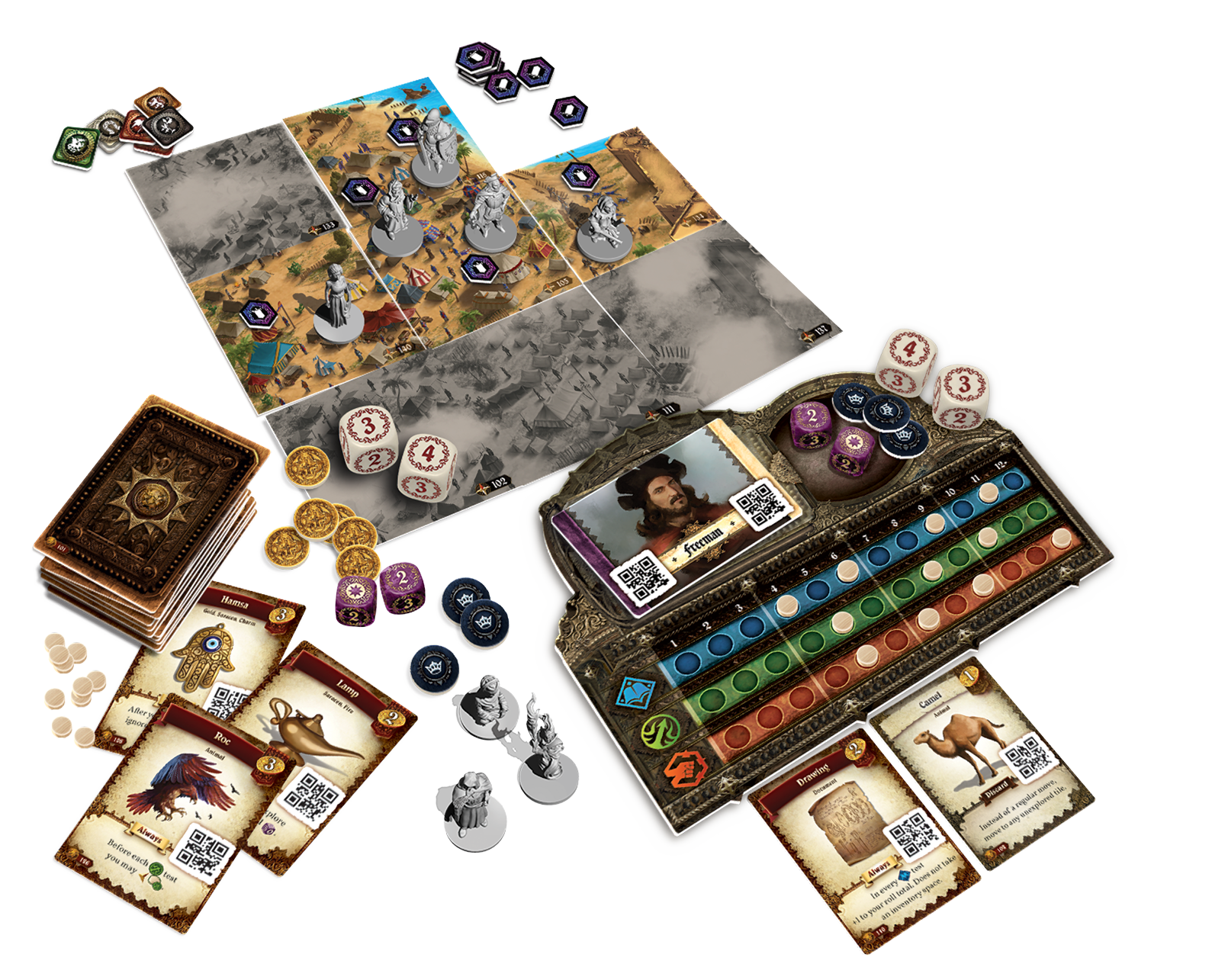 Five minutes ago I finished my first solo run-through of all three scenarios contained in Lucky Duck Game’s Sea of Sand expansion for Destinies. As I write, there’s a familiar twinge coursing through my mind. Not quite that feeling one gets upon finishing a good book – but perhaps more akin to emerging, eyes asquint, from an uncharacteristically spellbinding blockbuster. Could I be exaggerating? Maybe, but regardless, Destinies: Sea of Sand weaves a certain kind of narrative tabletop magic that is both engrossing and concise.

In this decidedly more exotic expansion to the excellent app-based adventure game, characters are exploring, investigating, and surviving the scorched deserts of the North African Sahara. Its opening scenario will put players right at the forefront of the Crusades, as they forge and force their own path into the pirate fortress of Mahdia – yet this colonial perspective soon gives way to scenarios covering the epic feats of both native city folk and tribespeople.

Like the base game, players will choose from a new trio of characters in each scenario, each one seeking out one of two potential destinies. What’s admirable about Destinies: Sea of Sand, is that these characters are not archetypal heroes – they are often diminutive figures merely on personal journeys. From shamed and shunned deserters to desperate widows, these characters will earn their destinies as they journey toward heroism or notoriety.

The sweltering setting is the first immediately apparent departure from the base game, and despite personal taste, I didn’t miss the suffocatingly grim tone of the European Dark Ages as much as expected. The simultaneously bleak and vibrant expanses of the desert hold just as many perils, yet the vibe here leans more toward rollicking adventure than creeping horror.

Other notable deviations from the base game come in the form of new mechanics concerning dungeons and mazes. These segments don’t take place upon the map and are handled entirely within the app, offering descriptions, prompts, and options much like a traditional ‘choose your own adventure’ game. Valuable guidance can often be discovered elsewhere in the world, making navigating these cursed corridors less risky, and encouraging a deeper level of exploration.

To facilitate this heavier focus on exploration, the scenarios in Sea of Sand don’t all rely on the usual single cluster of map tiles. In the campaign’s epic concluding chapter, several remote regions are linked together through the use of fast-travel mechanisms. Despite its simplicity, this decision makes Sea of Sand feel both sprawling and manageable, and adds to the sense of each player being on their own adventure.

Elsewhere, gameplay is much the same, with players pursuing their choice of destiny by gradually unfurling the map and its mysteries, interacting with NPCs, and using the excellent Scan & Play technology to interact with items. Whilst there are a number of new item cards and miniatures – including Sea of Sands’ hulking poster-boy, the Ifrit – a fair bulk of the base game’s content will be used too.

On the whole, there’s not much to find fault in here. Destinies’ ease of play and leisurely pace make it an excellent means of experiencing a story, be that solo or as a trio. Its simple exploration mechanics unfurl naturally with the narrative progression of each character, and more so than the original, players will be yearning to revisit scenarios to experience the stories they missed.

An immersive experience packed within a succinct campaign. Hopefully an indicator of things to come for the franchise.

TRY THIS IF YOU LIKED THE 7TH CONTINENT

If you’re looking for a quicker and simpler dose of adventure, Destinies: Sea of Sand could be a worthy alternative to this vast ‘choose your own adventure’ title.