Deranged is the latest in – it’s safe to say – an established subgenre: semi-cooperative Gothic survival horror, where a party of embattled society types fend off encroaching monsters, madness and, occasionally, each other. Exploring a town beset by werewolves, zombies and ghouls, you complete secret individual objectives, try to rid your character of curses, and collect items that may help you and the group. Ultimately, the group wins by ridding the town of monsters and their characters of curses by the end of the final night.

Whereas games like Betrayal at House on the Hill and Dead of Winter usually pick a single player to become ‘the traitor’, in Deranged the backstabbing is more dynamic. Certain missions punish players with curses if they don’t complete them, and curses can turn your character ‘deranged’, meaning they transform into a ravenous beast when night falls. There are two ways to regain your humanity – either have another player perform an exorcism on you, or kill another player while in beast form, sating your inner rage. What starts out as a clinically-efficient team effort can quickly devolve into a series of double-crosses and scrappy duels as players jostle to make it out of town. 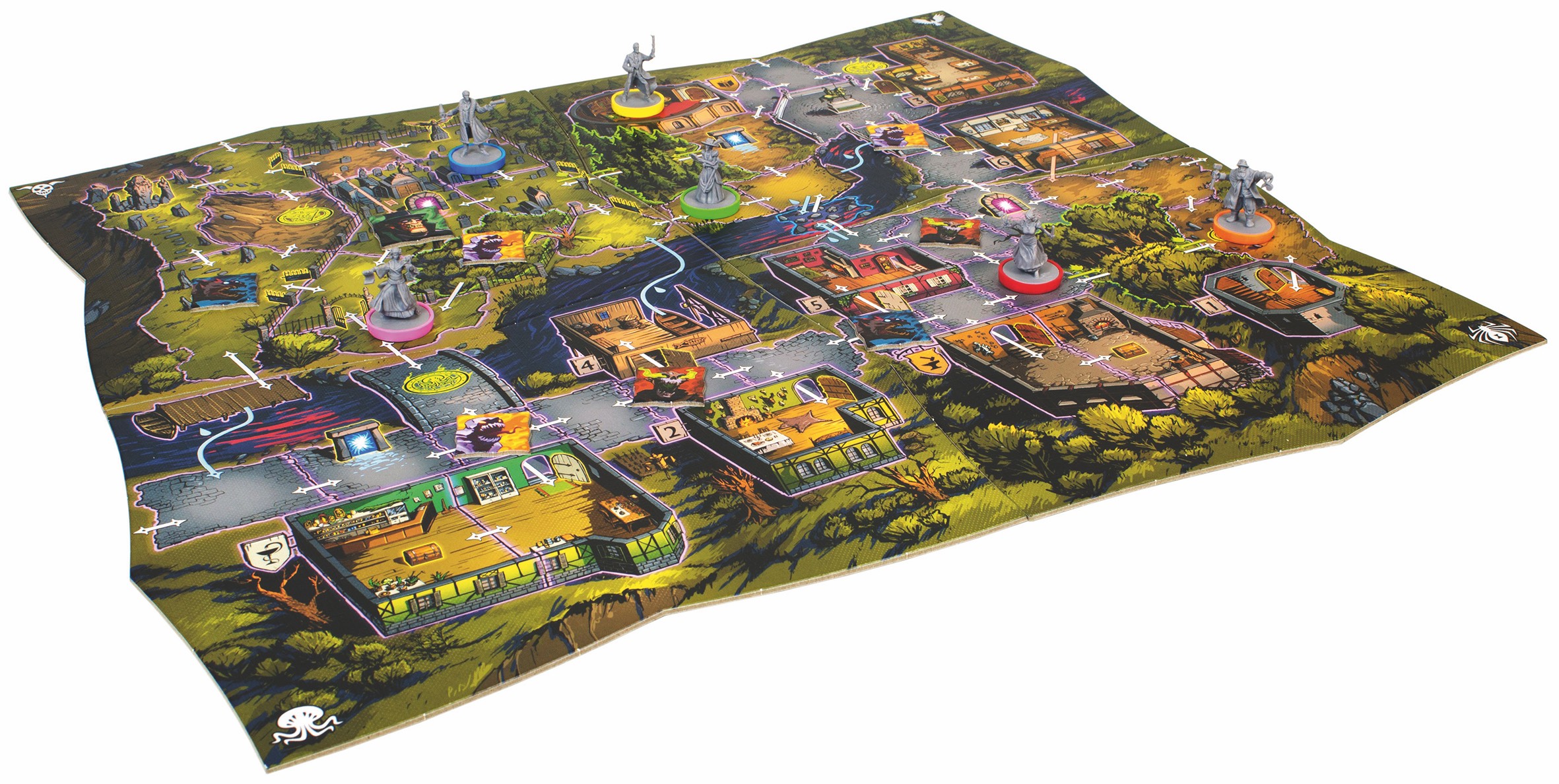 Even in a crowded marketplace, Deranged looks great. The multi-part board with its forced 3D perspective is colourful but easy to parse, the player minis – and their deranged counterparts – stand out, and there are heaps of illustrated cards and tokens to mark different effects. In a genre that trades on atmosphere, the artwork delivers, managing to hit a sweet spot between creepy and fun. The individual player Health and Sanity trackers are sturdy and easy to use, and overall the component quality lifts the experience and helps you immerse yourself in the game’s comic book shudders.

Rules wise, it’s pretty simple – each turn, you can do one of two things: play a card from your hand and do one or two of the actions on it, or rest. The main actions are Move, Attack or Search an area. If you do a second action, you lose a Sanity point, and at night, every action costs you one Sanity. Resting lets you restore Sanity. Players familiar with the genre will be ready to dive in with very little prep, and even relative newcomers shouldn’t feel too overwhelmed given how quick the turns are.

Deranged has less atmospheric flavour text than zombie survival thriller Dead of Winter, but also far less ‘roll a die for taking an action you have no way of avoiding – whoops, you’re dead’ style nonsense. You can still have good or bad luck – drawing a particularly useful item or a curse or night card that immediately makes you deranged – but you’re more likely to die from another player rounding on you to save their own skin than a crummy roll. Death doesn’t mean elimination, either – players get resurrected, albeit with a new curse that they must get rid of before the end of the game.

If you play with friends who don’t mind backstabbing, and are confident enough to make their own decisions in a cooperative game, Deranged has plenty to offer. Sanity is scarce, and powerful actions advance the clock towards night – potentially turning your fellow players deranged or giving them missions with big penalties for failure. Victory can slip out of your hands at the last minute; as long as you find that sort of thing funny rather than brutally unfair, it’s great. There are three scenarios to play through, and although the twists are fun, the game doesn’t turn on them, so there’s ample replayability. 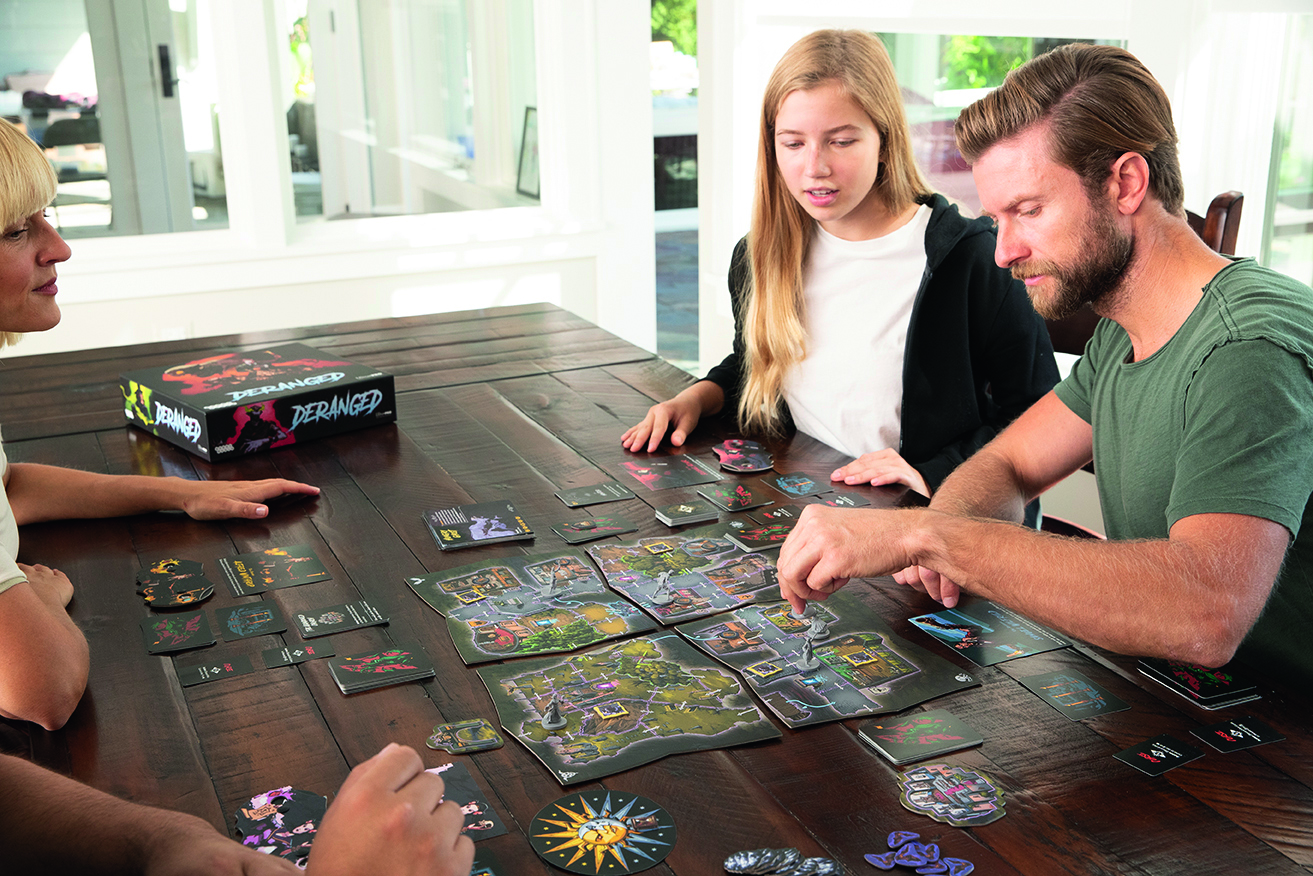 Deranged adds little by way of mechanics or theme, but what’s here is done well. It moves fast with lots of interactivity, it’s funny, and there’s plenty of tension.

TRY THIS IF YOU LIKED BETRAYAL AT HOUSE ON THE HILL

Is an obvious comparison, and whether Deranged is different enough to purchase if you’ve already own this (Dead of Winter or Mansions of Madness) depends on how much you love the genre.