One of the best zombie games currently available

Zombies... perhaps one of the most over used story elements we have seen in media recently; it takes a lot to break the shuffling groaning mould and race out in front of the abundant competition. This can be said not just for TV, film and computer games but also board games of which there are more than a few. Dead of Winter, however, is a fresh new thing in the zombie games market and in my opinion one of the best.

Published by Plaid Hat Games of Mice and Mystics and Summoner Wars fame and designed by the team of Isaac Vega and Jon Gilmour this is the first in their new “Crossroads” series.  Dead Of Winter puts the players in control of their own small teams of survivors, trying their best to avoid becoming lunch for undead banging on the colony gates. The game requires that the players work together to complete a common goal which ranges from taking zombie samples to stockpiling food as well as working towards completing a secret objective themselves. This means that, well, not everyone will be a winner at the end forcing the players to sometimes try and speed up or even stall the completion of the main objective in order to achieve their own personal goals. Throw in a betrayal mechanic and boom, you have a great game of mystery and intrigue. Is the person beside you really out for the betterment of the colony with that move or are they out for themselves?

Now let’s talk about what’s in the box. Loads and loads of card is the answer to that; you get the board itself and locations and decks of cards to go with them. You also get 30 zombie standees that’s right 30! And they can easily all get on the board if things go bad but you also get 30 unique survivors to play with, giving your games a rich variety and featuring fantastic artwork. All-in-all I love this game thanks to its great replayability and potential to expand in the future, so if you want a copy grab one now because these have been going fast. (Blair Fraser) 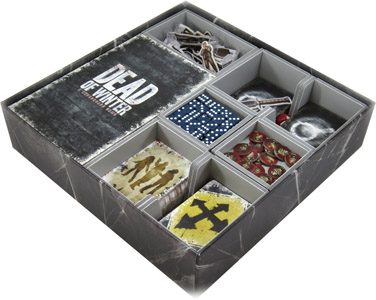 Compatible with Dead of Winter®, and The Long Night®.