The Devil's in the Roll

Cuphead was an instant video game darling due to its winning mix of instantly endearing rubber hose style animation and jazz soundtrack mixed with infamously challenging run-and-gun platforming gameplay. When transitioning to the tabletop in the form of Cuphead: Fast Rolling Dice Game, the game retained a lot of elements that were already very successful. The classic animation art style has only been made slicker with simple yet beautifully made components, like boxes for each boss level, great quality cards and custom dice. Even the music makes re-appearance through a free app that acts primarily as a timer but is also essential for mood setting. The main characters are also here – the titular Cuphead, his brother Magnum, Ms. Chalice and Elder Kettle – along with many bosses from the game. We won’t spoil which bosses though, because opening a box after beating one boss to discover who your next challenge is all part of the fun.

Re-imagining the chaos of the bullet-hell gameplay in a tabletop top format was a much more difficult challenge and the one that Cuphead: Fast Rolling Dice Game found only half a solution to. It easily nails the sheer sense of panic of facing each boss, as players only have 20 seconds (or less depending on the difficulty setting) to roll dice to match symbols of the boss attack cards. Each card must be addressed in order because - as they would in the video game – players must dodge or parry the first attack before addressing the next. Each attack sequence may consist of three or four cards with one or two symbols on each. So, if you are unlucky, you may need to precisely roll to match all six symbols, but in a less challenging attack, you would only need to match three symbols. The latter not only offers a millisecond of relief, but an opportunity to attack back by using extra dice.

At the same time, Cuphead: Fast Rolling Dice Game suffers from the Dark Souls syndrome. Like Dark Souls, Cuphead is a video game of skill. Players need to react quickly to attack patterns, moving precisely to jump, dodge and parry in order to beat the boss. It may be tough knowing you have only yourself to blame for failing a level, but that is also what makes winning so exhilarating: your fate lies in your hands. The luck of the dice roll, however, is not. Even if you are the fastest dice-roller in the world, rolling the wrong symbol three times in a row will cost precious seconds that this game does not offer. Cuphead: Fast Rolling Dice Game at its very core is a game of luck.

Yet if you don’t go looking for exact replication of the video game as a board game, Cuphead: Fast Rolling Dice Game still has a lot to offer. Each boss plays differently, introducing new mechanics, environments and challenges. Weapons and items change the flow of the game, some offering more powerful attacks that in return are harder to set up, while others even have abilities to mitigate the luck of the roll somewhat. 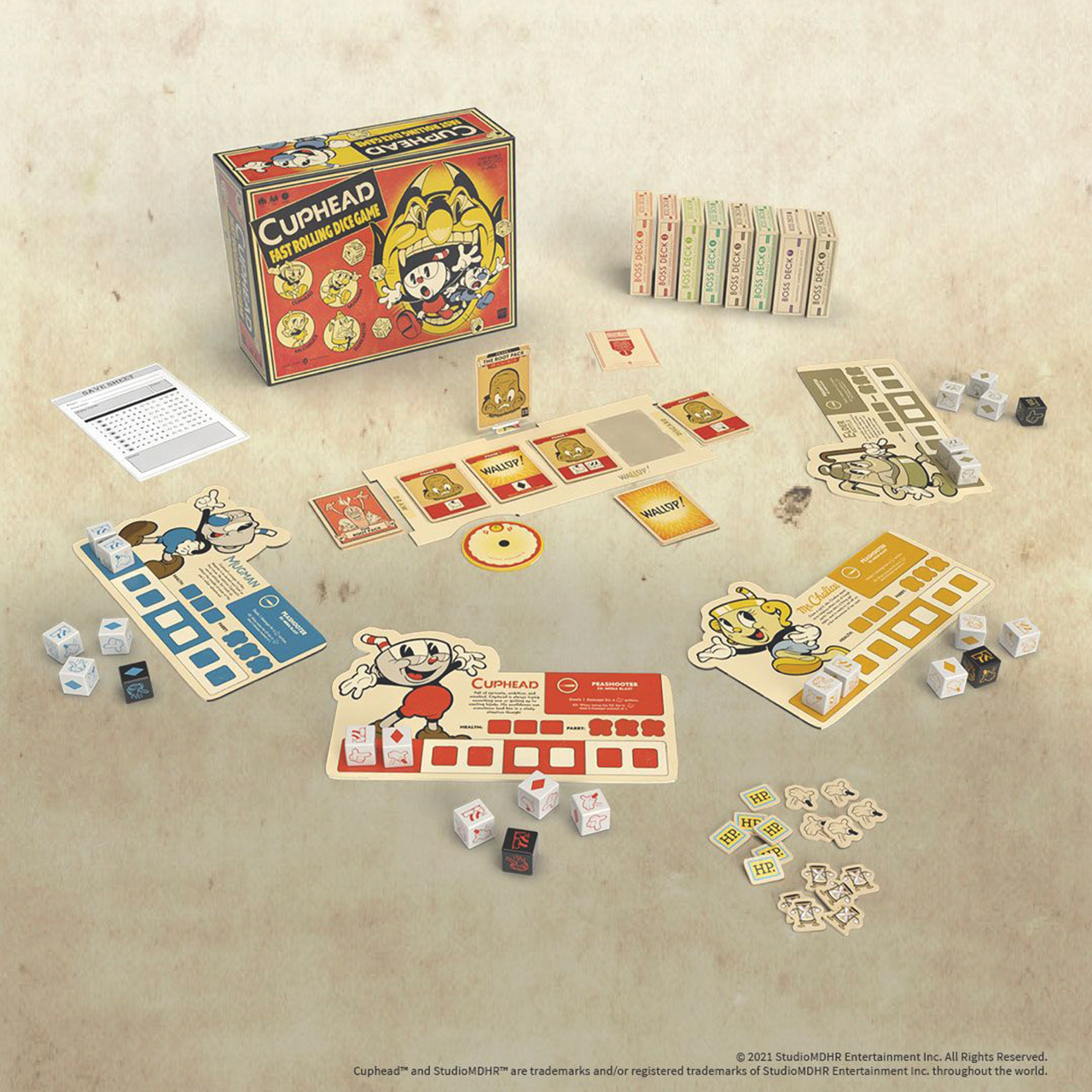 Just like the video game, this is a tough, at times demanding game, that has you lose more times than win. Yet its incredible sense of style, ease of set up and play and, most importantly, engrossing fast-paced gameplay makes it a challenge worth attempting, again and again.

Perhaps, this is not the Cuphead board game that the fans were looking for, but still a great game that recaptures the video game’s sense of style and chaotic gameplay.

TRY THIS IF YOU LIKED GALAXY TRUCKER

If there is such thing as an enjoyable stress, then frenzied searching of tiles to build the ship in Galaxy Trucker and panicked rolling to dodge attacks in Cuphead: Fast Rolling Dice Game definitely qualify.