One giant leap for frogkind

Straight out of the gate, I’ll put it like this – Cosmic Frog is the game your friends think they’re going to play when they see Rising Sun for the first time. Clearly Rising Sun should be about big monsters wrestling one another rather than diplomatic elegance. Monster WWE is exactly what Cosmic Frog feels like in the best possible way.

Players set up a neoprene mat displaying the hexes of ‘The Shard’, an outer dimension track, and a generalised ‘Aether’ area of space. Player then set out hex tiles across the map, with highlands (double thickness cardboard) atop lowlands, and barrens beneath all. Once this is set up, everyone takes a beefy space frog worthy of heralding Galacticus, clips a coloured base to it, takes a power card, shuffles the action deck of all player cards (dictating turns and shuffled between rounds), load up their action point tokens, and the space rumble can begin. 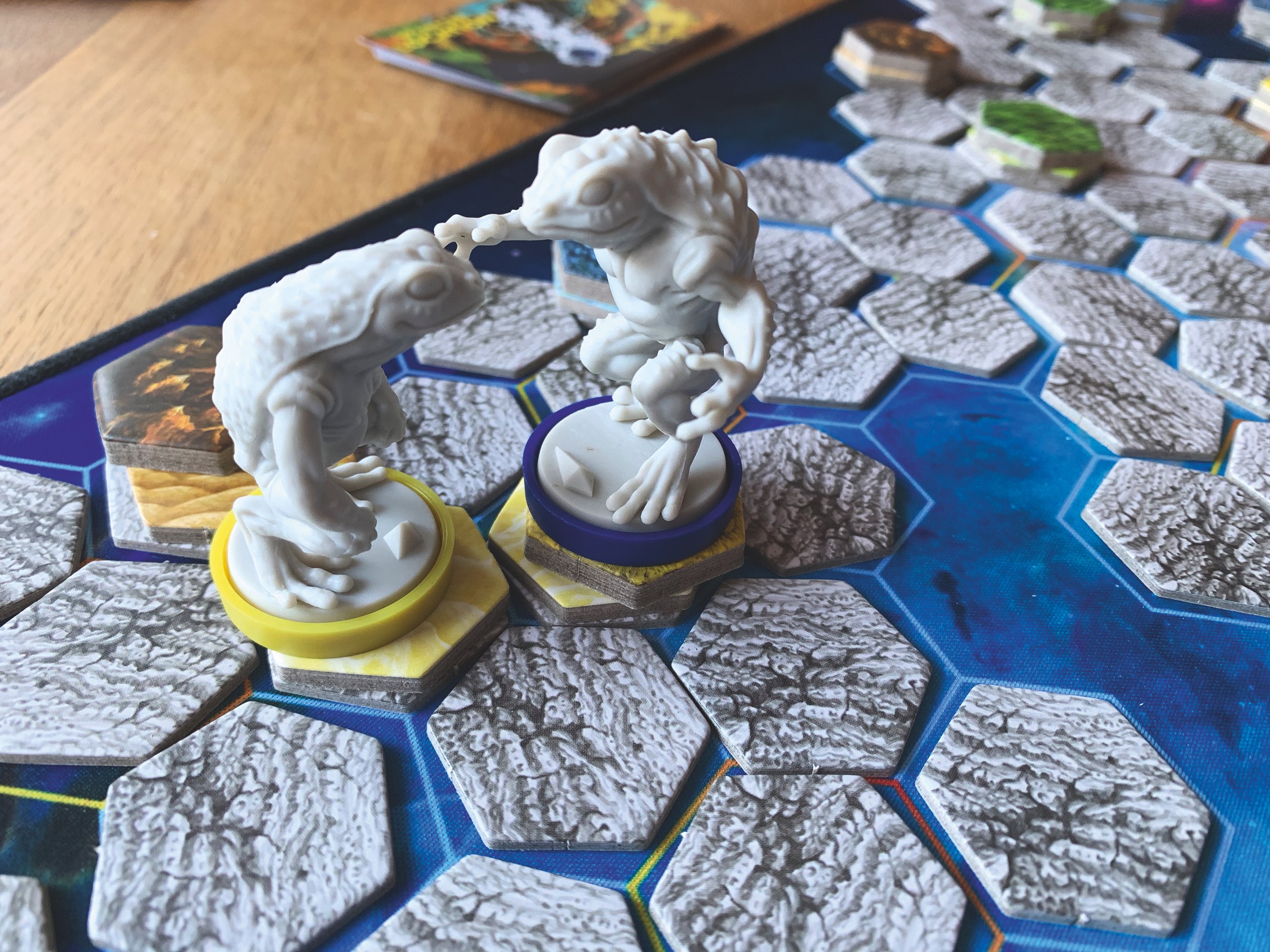 Nominally we’re meant to be bounding around, hoovering up land tiles into our gullets, leaping into the Aether and then disgorging said land into our vaults (which scores us points based on patterns). When a frog has something in their gullet, they can’t hop as far, making that leap to the aether a little more difficult. However, the other danger of having food in your gullet is that if you get walloped, the walloper can steal your collected land in some kind of gross gut-punching-vomit-swallowing combo.

Even better, when you attack another frog, there’s WWE style knockback, based on the difference between your combat dice (different coloured and weighted D6s indicated by whatever power your frog has currently). Smack them hard enough and they’ll be flung into the Aether, meaning they’ll need to land again to start harvesting resources. Smack them hard enough in the Aether and you’ll send them spiralling out into the outer dimensions, similarly by the difference between combat dice – the equivalent of being thrown into the crowd. Once a player is out here their vault can be raided by others, and they have to swim back to the primary dimension of the game. On the plus side, they get a new power card, which comes with new combat dice – changing up the balance of the game when they return.

All of this is happening while the action deck begins spewing out splinter cards, indicating spots on the board where tiles will be destroyed. This destroys land and fragments the board further, shrinking the ring that you’re grappling other frogs in and piling on the pressure of grabbing point scoring land that’s probably in someone’s gullet.

If you’re looking for a game that really feels like a conflict, that lets you ricochet around space like an intergalactic amphibian royal rumble, has narrative twists and turns as the far-flung frog returns more powerful than your opponents could imagine – and still retains a chill resource arrangement and matching puzzle in its scoring – this is one giant leap for you.

It’s the conflict heavy, deeply destructive games of cosmic grappling that you probably didn’t know you wanted. It’s a little weird, but what do you expect from space frogs?

TRY THIS IF YOU LIKED Survive: Escape from Atlantis…

A game of similarly destructive pressure and pleasure, all be it in the form of a sinking island rather than space frogs. 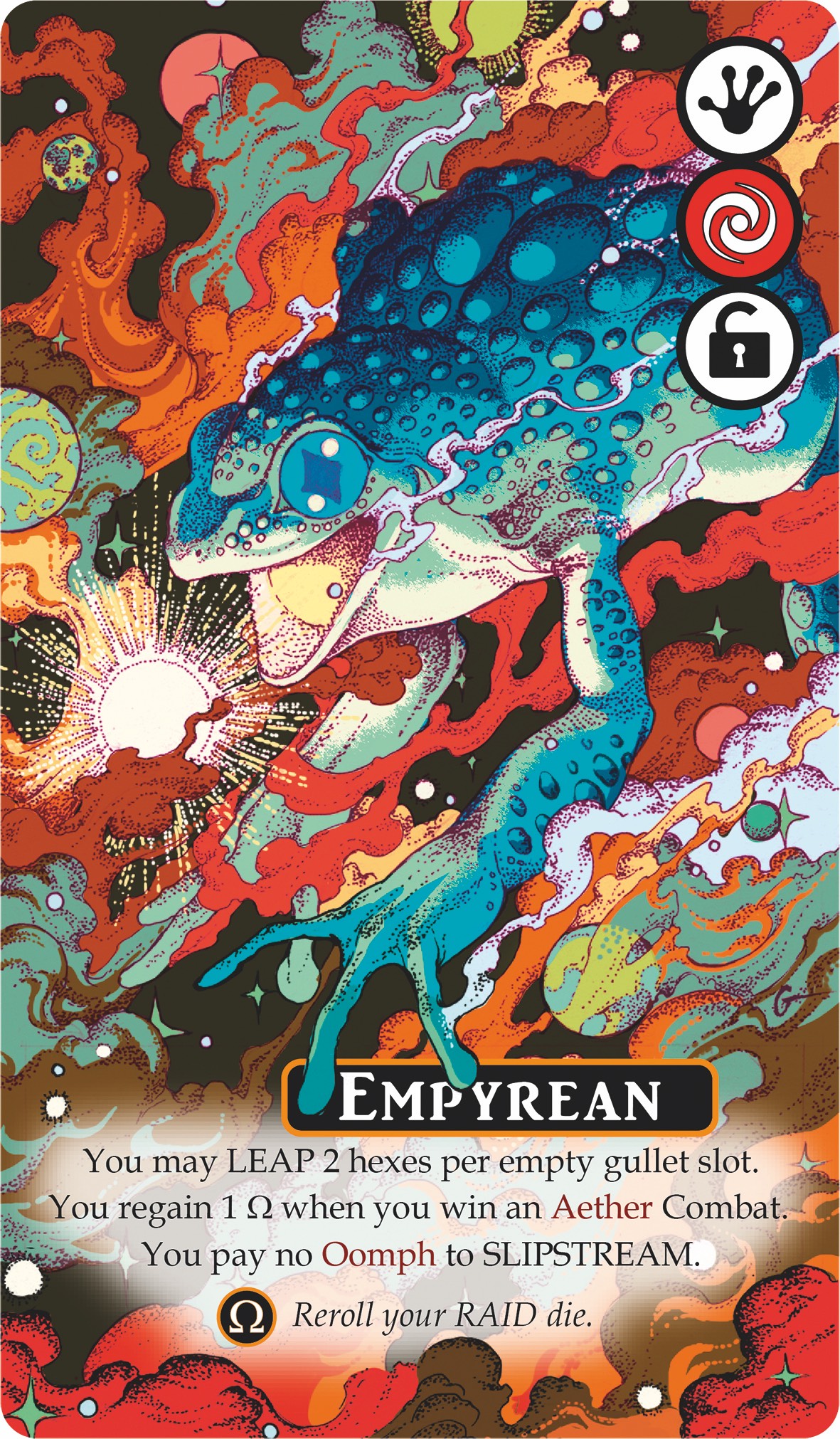