Now, I’m not saying that I feel short-changed for missing out on the era of Cold War paranoia, but the TV I grew up with wasn’t particularly populated with 50s B-Movie reruns. In fact, I mostly engaged with my extraterrestrial fascination through books – grainy, monochrome snaps of saucers above Nevada, mysterious excerpts on Area 51, and unimaginative sketches of oval-eyed humanoids. Today though, this fascination can play out across the tabletop, with Flying Frog Productions’ Conquest of Planet Earth: The Space Alien Game.

First released way back in 2010, Conquest is an area influence game where players take on the role of invading 50s sci-fi era aliens. Players will each control a quartet of saucers belonging to one of ten wacky alien races, as they wreak havoc across the planet and face off against the puny human resistance either competitively or cooperatively. Ultimately though, the goal is to conquer enough locations to eradicate humanity by meeting the required number of Terror Points

Play revolves around the use of action points which are either allocated randomly with a die roll or chosen from players’ depleting pool of numbered tokens. Actions will mainly be used to move around the board’s different regions, each one made up of either empty spaces or cards acting as Locations. Players also hold a number of Event cards as dictated by their race, with many of these requiring action points when used.

Terror Points are won by winning Battles at Locations. Naturally, small towns and power plants put up less of a fight than military bases and cities, but many Locations feature game changing effects which can dramatically change the outcome. Combat is simply a case of drawing Resistance cards and comparing strength values before facing off with a die roll. Special abilities and Event cards add a touch more depth, but part of Conquest’s charm is its simplicity. 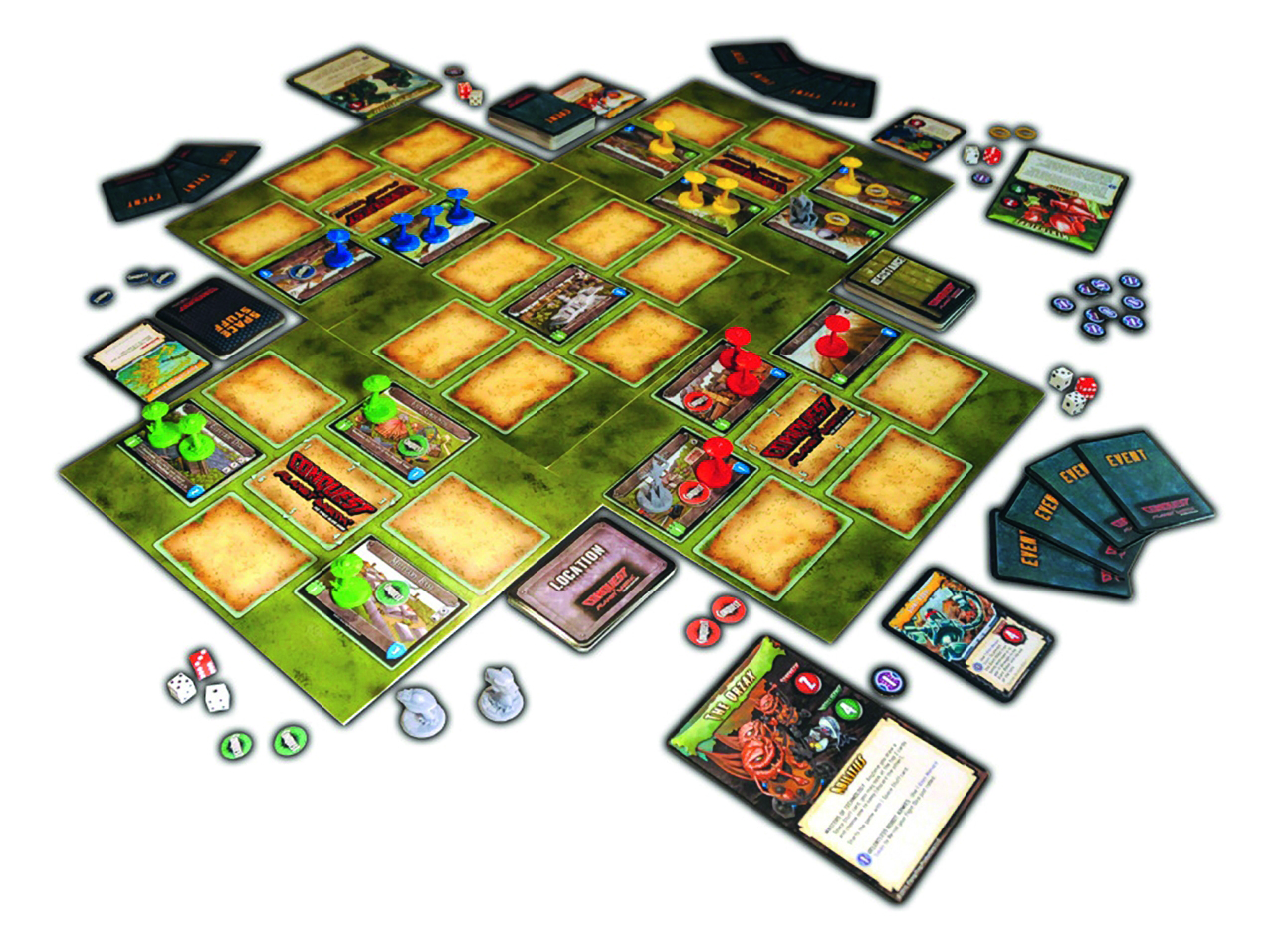 Flying Frog Productions are probably the ideal candidates for a boisterous B-Movie board game, with other early titles such as Last Night on Earth championing a schlocky and firmly tongue in cheek tone. Back at its initial release though, Conquest marked a departure for the team as they strayed from their usual photographic aesthetic style to make full use of illustrations. The artwork here by Mark Morgaine is one of the game’s high points, with its quirky, comic book pop, and bursts of nostalgia, creativity, and humour commanding players’ attention and complementing Conquest’s snappy and unpredictable gameplay. Unfortunately, the cards themselves have an odd, plastic feel to them, making them prone to sticking together and tricky to shuffle. On the other hand, they’ll probably hold up against the odd spillage of beer or alien goo.

Similarly quirky is the inclusion of an ancient, almost alien form of media: the Compact Disc. Comprised of eleven keyboard-heavy tracks, ranging from the fidgety techno of ‘Vile Vyborian Arbiters’ to the creepy waltz of ‘We Are the Trun’, this bonkers soundtrack adds heaps of fun to game night and is indicative of the passion tied up with Flying Frog’s work.

Of the two gameplay modes it’s hard to pinpoint which works best. Where competitive is ideal for a dose of cruel, chaotic antics, cooperative is a touch more strategic. With some simple and manageable tweaks to gameplay involving moving Resistance tokens, the game morphs into a smooth, cerebral, and engaging co-op experience. Ultimately, it will be down to your game group as to what works best, but having both options be so well executed is a pleasant surprise.

A light and shamelessly gaudy dice-chucker with an effortlessly fun theme plastered across two excellent modes of play.

TRY THIS IF YOU LIKED LAST NIGHT ON EARTH: THE ZOMBIE GAME

Essential if you’re after a continuation of Flying Frog’s pulpy, cinematic gameplay… and another soundtrack!