Bring out the blimps!

Like Mad Max with airships, CloudAge conjures up a scorched future world where water is a precious commodity and nefarious militias have occupied most of the surviving towns and cities. However, soaring out of this grim eco-nightmare are heroic dirigible pilots (one-to-four of them, in fact), who strike at their oppressors from the skies and seek to bring fresh, green life back to the planet.

Each player starts with an airship that requires judicious upgrading, with a tableau to build from potentially synergising Terraforming Mars-esque Project cards. They also explore the long, four-segment board which depicts this dry, brown world and all its cloudy conurbations, moving from city to city and battling militias using a personal deck of Navigation cards that must be beefed-up over each game’s seven-to-eight rounds (depending on the player count).

This latter element involves CloudAge’s most innovative and impressive element. During a round’s action phase (which follows production and movement/combat), you can choose to collect resources from one of three cities, depicted on face-up cards. The game has four resources: water (aka currency), metal (for building new airship bits, like guns or turbines), energy (to fuel movement and battle, mainly) and Project cards (for the aforementioned engine-building). But how much of each a city contains is mostly obscured by a picture of a cloud on a clear plastic sleeve. You have to peer around its edges at the birds-eye view of the city to try and gauge which resource it’s most likely to treat you to, and hope you’ve read its visual clues correctly. 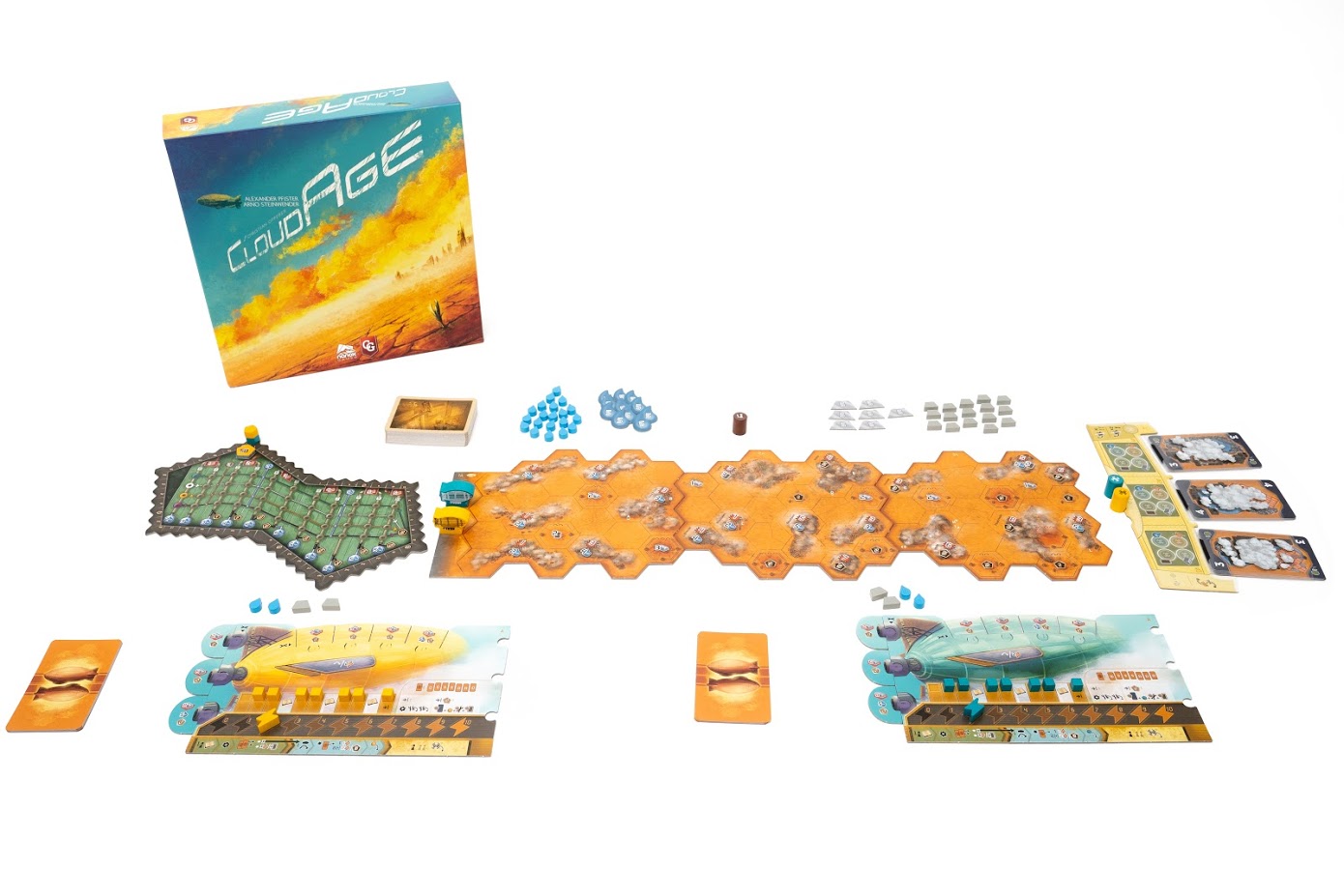 After the first player has made their selection, the others follow with their own in turn order, and then the card is pulled out of the sleeve to reveal what it truly yields. It is hugely satisfying when your instincts are proven accurate, but also amusing to find, as happens quite often, that you’ve been barking up the wrong tree. Either way, the card goes into your Navigation deck and will often also give you New Growth hex tiles, many of which can be added to the board for extra bonuses.

Designers Alexander Pfister (Great Western Trail) and Arno Steinwender (Starlink) keep the complexity level quite low, so CloudAge avoids the hard crunch of, say, Pfister’s Maracaibo. But it does include a variation on that game’s quest mode, with a six-chapter storyline that adds cards into the Project deck and gradually changes the board through the application of Legacy tiles. It’s a welcome inclusion, adding variety and, over time, new challenges, but entirely optional.

The story mode’s narrative does suggest a cooperative spirit that often asks players to vote on shared approaches to situations, and this jars a little with the straightforwardly competitive ‘battle for VPs’ structure of each individual game. But CloudAge’s strength is in the interlocking of its core mechanisms, so even if you decide the story mode isn’t for you, there’s still a great game to enjoy here.

A strong and accessible title from Eurogame stalwart Pfister (co-designing with Arno Steinwender) that has echoes of both Lost Ruins of Arnak and Terraforming Mars.

TRY THIS IF YOU LIKED LOST RUINS OF ARNAK…

CloudAge’s clever combination of deckbuilding with other mechanisms (in this case engine-building and map movement rather than worker placement) brings Arnak to mind, though it doesn’t have that game’s colourful visual appeal.