In space, no one can hear you laugh. But you probably won’t.

2016’s Clank! combined Dominion-style deckbuilding with dungeon-crawling fantasy, with players sneaking through subterranean caverns, stealing priceless treasures and avoiding the ire of a justifiably angry dragon. It generated considerable buzz online, and now it’s spawned a sci-fi sequel, Clank! In! Space!, which swaps swords and spells for lasers and lightsabers.

At its core, the follow-up will feel familiar to anyone who’s played games like Star Realms or Marvel Legendary. You start with a handful of low-powered cards, adding new, more impressive ones to your deck with each passing round. Clank! In! Space! builds on the deckbuilding formula, though, with a board representing a space station; you use the cards in your hand to explore its twisting maze of corridors, conveyor belts and teleporter pads in search of high-tech goodies to pilfer.

Like its predecessor, the game’s biggest hook is its emphasis on stealth. As you move around the board you generate noise, represented by cubes in each player’s colour. These go into an ominous black bag and can prove fatal when Lord Eradikus, the station’s commander, attacks at random intervals throughout the game. When that happens, you draw some cubes from the bag, with players taking damage whenever one of their own appears. Bigger, more effective moves generate more noise, meaning you can never be sure whether an audacious play will earn you a glorious victory – or a splattery death.

It adds drama to proceedings, but it also introduces an element that’s been virtually abandoned in modern game design: player elimination. Suffer too much damage and you’ll be knocked out of the race. Escape before your rivals and you’ll be sidelined while they finish the game without you. In either case, you’ll be reduced to a secondary role, pulling cubes from the bag of doom to inflict additional pain on your remaining opponents.

It’s not particularly entertaining, and it isn’t the only place where the game shows some rough edges. Its deckbuilding element comes with a decent assortment of strategies to discover, but little that other games haven’t done already. The nerdy sense of humour, which incorporates tongue-in-cheek references to everything from Star Trek to Hitchhiker’s Guide, suffers from the Munchkin problem of losing its comedic punch after your first playthrough.

The game does manage to create an atmosphere of ramping tension, with boss attacks getting deadlier over time. Its combination of clever cardplay and board-based thievery also throws up some interesting problems to solve, and for fans of the original Clank!, this deep-space reimagining offers some tweaks on its predecessor’s blueprint.

But if you’re in the market for a deckbuilding board game, you aren’t short of choices – and Clank! In! Space! does little to elevate itself above the middle of the pack.

Clank! In! Space! creates some tricky logistical puzzles and its bag-building damage system makes for some tense moments, but it’s hampered by player elimination, a deckbuilding system that offers little new for experienced players and an over-reliance on pop culture in-jokes that quickly becomes grating. 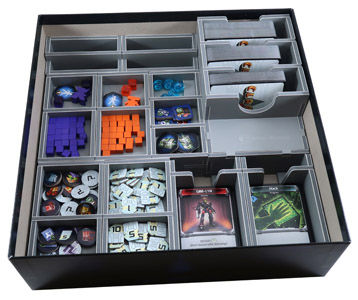 Compatible with Clank! In! Space!® including the Cyber Station 11® and Apocalypse!® expansions.