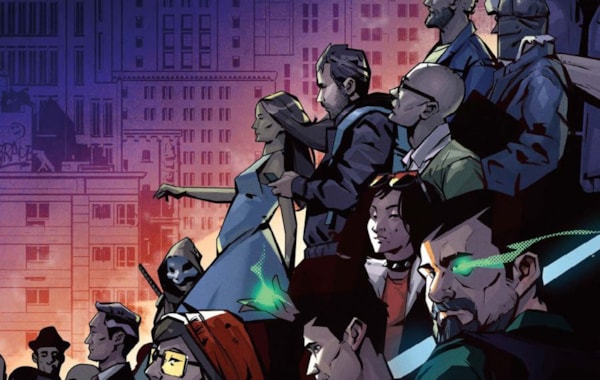 Legends and lies in the big City

Some games are defined by their mechanics or their playstyle, others by the worlds they seek to recreate. By far and away the most enticing aspect of City of Mist is its tone – a fantastical spin on noir laid out in purple and black, bright neon and crackling parchment. It’s a game for diehard story-lovers and storytellers – and though it’s not the cleanest gaming experience out there, it has the potential to be one of the coolest.

The game is set somewhere in The City – always written with capitals – a modern metropolis packed to the gills with normal, everyday folks going about their normal, everyday lives. Woven between them, however, are those people touched by the mythos and imbued with the powers of mythical figures plucked from legends and fables. A woman locked up in a corporate tower may have the magic hair of Rapunzel, while an investment banker cursed by their own rampant success might inherit the power of Midas and his golden touch.

Only those touched by the mythos themselves can resist the mind-wiping effects of the titular Mist. Fortunately, that’s a category that happens to include the player characters, each of whom is drawn to investigate the weird crimes and dangerous phenomena that are a by-product of a city crawling with heroes, monsters and demi-gods.

The sheer range of options this simple setup provides is almost impossible to grasp. Many games claim to only be limited by your imagination, but City of Mist comes a lot closer to actually achieving this than most.

For example, a team of investigators could include a fitness instructor with the strength and anger-management issues of Hercules, or a sinister librarian whose urban legend-inspired powers allow her to enter mirrors and find those who speak her name too many times. If you want, you could riff off stories drawn from The Christmas Carol or the dreamtime myths of Aboriginal Australians and everything in-between.

Many systems would crack under the weight of trying to balance all the powers and abilities these bring to the table, but City of Mist handles it by pretty much ignoring numbers entirely. Characters don’t get stats or attributes to fiddle with; instead everything from their magical invulnerability to the car they drive is reduced to a series of simple tags – ‘virtually unkillable’ and ‘old taxi-cab’. When you run into a situation that requires a check, whether that’s punching a hole in a wall or convincing a cop to let you onto a crime scene, you just count up all the beneficial tags that apply and add that to your dice roll.

While this is wonderfully simple in theory it can get rather muddy in actual execution. At any one time a character will have four themes that define them – some mundane, some fantastical – each of which has four tags associated with it. On top of this you factor in statuses that can range from ‘sleepy’ to ‘dead’, deal with a slew of environmental tags and manage a handful of meta-currencies.

All of this helps the game achieve story beats and reach for concepts that would be close to impossible in a more streamlined system, but that does some at the expense of the silky-smooth play usually enjoyed by games built on the same Powered by the Apocalypse framework that City of Mist uses. This isn’t helped by the fact that the game’s dedication to preserving immersion extends to the barrage of new phrases and terms created for its mechanics, not all of which are particularly intuitive.

Your heroes are ‘rifts’, for example, while enemies are ‘dangers’ and experience is ‘attention’. Getting familiar with the game requires the entire table to commit a glossary of new concepts to mind. In more conventional RPGs this would be considered pretty standard stuff not worth mentioning, but for a game that focuses so heavily on the storytelling side of things it’s an unusually high hurdle.

Minor irritations like this, however, may be the price we need to pay for something as inventive as City of Mist.

The concept is a beautiful blend of gritty detective serial and Neil Gaiman’s American Gods, with oodles of room for players and GMs alike to cannibalise their favourite stories, while the writing is sharp and solid. And – just in case there was any doubt remaining – the art and style are genuinely fantastic.

Style and drama ooze from every page of this beautiful book. It takes a little more effort to crack than most story-driven games, but when things click it offers something truly special.