We built this city on... cardboard tiles

City building is one of gaming’s great recurring themes. From Suburbia to Between Two Cities and Warsaw: City of Ruins, there are plenty of opportunities to throw on a hard hat and create your ideal urban environment.

That goes for video games, too. The iconic SimCity series has kept generations of players up into the early hours tweaking tax rates and planning power grids. And more recently, contender Cities: Skylines has emerged as the top civic administration simulator. Now it’s made the jump to the tabletop, with a cardboard conversion which charges you and your friends with building the city of your dreams, or woefully mismanaging it into an overcrowded, polluted, crime-ridden hellscape.

Unlike most city-building games, which see players competing against one another, Cities: Skylines puts everyone on the same team, working together to grow a tiny settlement into a thriving metropolis. Your efforts unfold on a modular board representing the land your city is being built on. As you play you’ll uncover more ground to develop, flipping over new segments to reveal areas to expand into.

With each passing turn, you and your teammates fill the board with tiles representing an array of different buildings, each of which comes with advantages and drawbacks. Industrial zones reward you with cash, but they also generate pollution. Commercial zones create jobs, but they also increase the crime rate, presumably as bankers furiously channel cash to dodgy accounts in the Cayman Islands. Attractive homes bring new residents flocking to your city, but unless you have enough job opportunities for the new arrivals, they’ll reduce your population’s happiness as they trudge dejectedly to the Job Centre. 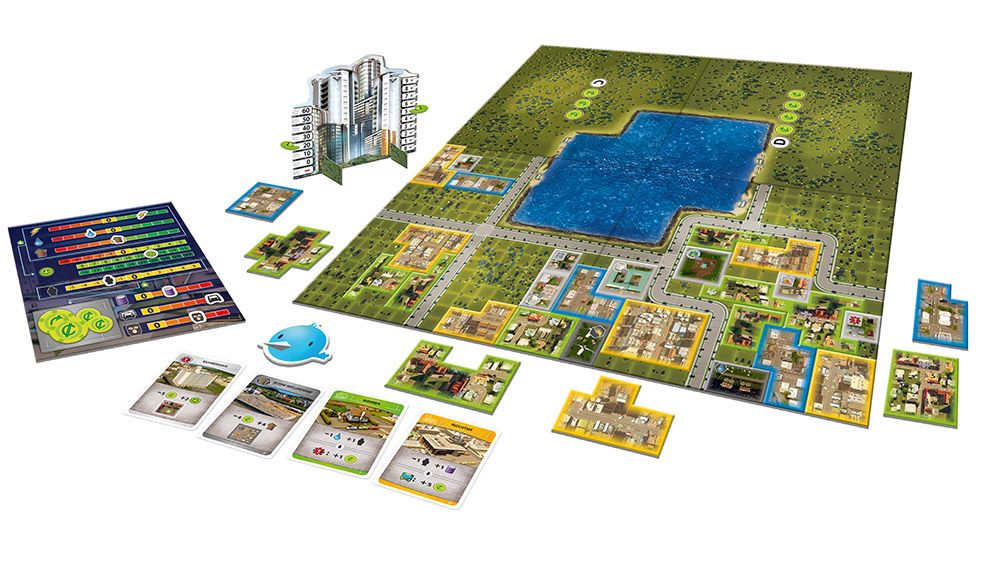 It means that Cities: Skylines is essentially a balancing act. The things that generate money cause problems, and the things that fix problems cost money. There’s also a Tetris-like element, with players trying to slot differently shaped building tiles into various districts as efficiently as possible. But other elements are less fun.

The biggest problem is the card-based system determining the buildings available to you at any given point. While there are ways to manage the cards in your hand, there are times when you’ll desperately need certain types of buildings to deal with specific issues, only to be scuppered when the deck refuses to spit them out. It results in turns where you’ll play cards not because they help you, but because you want to get rid of them in the hope of drawing a more useful replacement.

It leaves a sour taste in what’s otherwise an engaging enough puzzle, and while it doesn’t affect every game, it feels unfair to see your city fall into bankruptcy because you just couldn’t play the cash-generating cards you needed. Some of the game’s tiles are also pretty similarly coloured, and even if you have perfect vision is can be confusing trying to distinguish light blue and grey from dark blue and grey.

It means that while it has some gleaming skyscrapers and well-kept leafy avenues, this city also has a few run-down neighbourhoods you’d prefer to avoid.

It’s odd that we don’t have more co-op city-building games, and Cities: Skylines has a real feeling of collaboration. Its Tetris-like spatial puzzle combines with some tough resource management in ways that take some careful thought. But its reliance on randomly drawn cards can become very frustrating.

TRY THIS IF YOU LIKED… SUBURBIA

Citites: Skylines is another tile-laying urban management puzzle. But it puts a cooperative spin on the much-loved theme.

◗ Administration board and markers