Oh I do like to be beside the seaside

I’m very partial to city-building games and Cape May does not disappoint. The action occurs on a large map showing the streets of downtown Cape May, the oldest seaside resort in America. Players are entrepreneurs building residential and commercial property around the town in order to gain income and prestige. There are four different zones – gravel, grass, dirt and sand – and as you might expect, the price and value of property increases the closer you get to the sea.

Bonus cards, which give prestige (victory points) if certain conditions are met at the end of the game, provide much-needed direction and help shape your strategy. Players will also win prestige for each cottage they’ve upgraded into a Victorian house or landmark, achieving a majority of buildings in a zone and having spotted a diverse collection of birds.

Mostly, the three actions you get on each turn will be spent on constructing or upgrading buildings adjacent to your player marker (which always stays on the road), acquiring or playing action cards, and moving around the town. Seven movement cards control the distance you can travel. Travelling the shortest and longest distances costs money, which can be scarce, so working out how to get where you want to go by taking the fewest actions and spending the least money is a lovely puzzle. You’re drawn to land on bird squares which enable you to collect a bird token at random from the bag. But these squares are predominantly at intersections and not adjacent to building plots, preventing you from multi-tasking – and that’s a hard pill to swallow.

At the start and then three times during the game – at the change of seasons – you’ll get an injection of cash equal to your level on the income track. The cost (in coins) and the gain (on the income track) that each construction or upgrade generates is tabulated on the player aid. With variations between each zone and building type, this table is overwhelming at first, there’s a lot of information to process. But get your head round this and you’ll find the rest of the game works intuitively and elegantly.

There’s a glorious tension between constructing commercial buildings, which produce high income and constructing residentials to attract decent prestige. Ideally you want to focus on money in the early game and prestige later, but it’s a wobbly line to walk. The challenge of mapping out an efficient plan where every building contributes in multiple ways makes this game a sheer delight.

There’s just the right amount of randomness built into the game. Event cards change each round marginally, not enough to throw off entire plans, but sometimes enough to force tactical play and quick diversions. Action cards are powerful - letting you build or upgrade anywhere and enabling you to move further. You’ll get two action cards at the start of each season, but extras are costly to come by, so you’ll want to use them well.

Considering the huge choice available to players and enormous variety in how prestige can be won, the game is incredibly well balanced. Four players with completely different strategies and bonus cards may end the game astonishingly close in points.

This is a heavy box packed with components of an outstanding quality. There are miniature buildings with charming details, a massive double sided board for different player counts and a sizable stack of tiles and cards. The artwork is pretty and the game has a table presence which will draw in bystanders and make them quite jealous… though you may not notice as you’ll be too immersed in the gameplay. 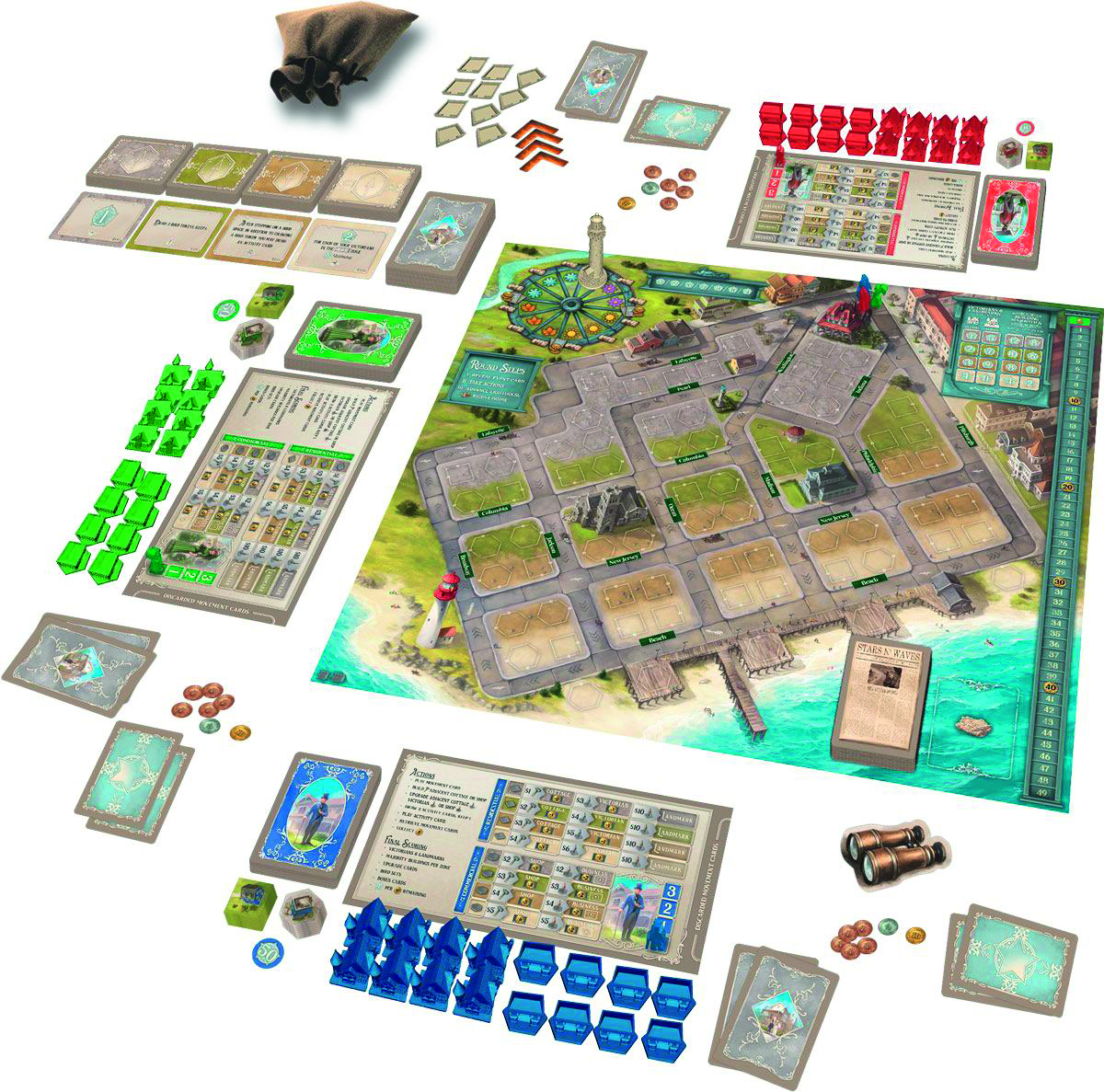 In Cape May, players are mildly respectful of one another, never threatening claimed plots or causing direct conflict, but don’t let the quaint and gentle theme fool you! It’s every Victorian entrepreneur for themselves in this power-hungry tourist trap.

Play this if you liked… Mexica

Despite the clash of cultures, there are similarities in theme and both of these area-majority games require you to spend action points to move and build.