The industrial revolution was built on beer

Dr. Ian Malcolm warned the scientists in Jurassic Park that just because you can do something, doesn’t mean you should. Roxley didn’t heed those words when acquiring the rights to remake and update the original 2007 economic strategy game Brass. While Brass: Lancashire is a lovingly updated remake, Brass: Birmingham is an odd pseudo-sequel whose minor gameplay tweaks and changes feel mostly arbitrary and unnecessary.

Martin Wallace’s intricate strategy game of economic management is over a decade old, and still among the top-rated board games. Very little needed to be improved or fixed, as proven by Brass: Lancashire.

Brass: Birmingham gets the same amazing new art treatment, with a gorgeous double-sided board of 19th-century England at the height of blackened, coal-stained skies and glowing lamps. Birmingham keeps all the core gameplay systems: ambitious coal barons use cards and coins to build factories and ship goods along canals and railways, competing to become the biggest titan of industry.

The component quality is impeccable. The game and player boards are among the best I’ve ever seen, especially the night side, and the poker chips add a literal weightiness to every pound spent. Brass has never looked so good, and with the larger number of components and day/night game board, this is one category where Birmingham squeezes ahead of its older sibling.

The biggest new gameplay addition in Birmingham adds beer as a consumable resource. In an age where clean water was hard to come by, beer provided a good source of hydration. In Birmingham it strangely replaces the port as a means to ship goods. Instead of shipping cotton to your or another players’ port, you’ll have to consume a unit of beer. And yes, it’s nigh impossible to avoid cracking jokes about it every time it comes around. However, goods can only be shipped out of a small number of cities, such as Gloucester, making the new beer resource more limiting than freeing. Breweries add more depth to the economic engines each player has to build, in a game that didn’t need any more complexity.

Birmingham also adds new manufacturing and pottery buildings that need to be shipped in order to score their points. These new industry tiles make for a much bigger player board, as manufacturing alone can be upgraded up to level eight. With new buildings your choices and upgrades are more diversified. More importantly, each location is more restrictive on which industry tiles can be built, creating a slightly more challenging gameplay field as players elbow each other out of the few brewery and pottery spaces on the map, even when using Brass’ excellent new player scaling for two and three players.

Brass: Birmingham is a fine game because Brass is a fine game, and it’s absolutely recommended for the updated art and new components – unless you’re getting Brass: Lancashire. If it weren’t for the new game board and map, much of the components and rules could’ve simply been added to Lancashire as an expansion. Had Roxley only done Birmingham as a Brass remake, it would be the obvious choice. But between Lancashire and Birmingham, the latter feels just a bit too complex, with too many buildings and resources that don’t necessarily improve the core experience. Just because they could play around with Brass’ DNA, doesn’t mean they should have.

If you want your Brass with more components, more complexity and more beer, Birmingham has you covered. If you just want to play a nicer-looking Brass, go with Lancashire. 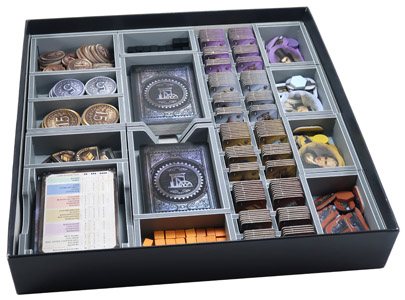 Compatible with Brass: Birmingham® or Brass: Lancashire®, both Retail and Deluxe editions.