The Dark Knight returns in this stylish social deduction title

With such a colourful cast of uniquely-talented characters and a focus on silently dispatching his foes, it’s really a wonder Batman remains so underrepresented in the social deduction genre. Here to remedy this injustice is Almost Got ‘Im, a Werewolf-style title inspired by the acclaimed Batman: The Animated Series episode of the same name where the Dark Knight secretly infiltrates a poker game held by his enemies.

What’s particularly satisfying about Almost Got ‘Im is that it captures the atmosphere of the cartoon episode so accurately, coming complete with a deck of 52 custom Batman playing cards. (Which are almost worth the price of admission alone.)

Players are cast both as visible characters – including some of the Bat’s most famous villains, such as Two-Face, The Joker, Penguin and The Riddler – and secret roles, including Batman in disguise, and proceed to play poker. Poker hands can then be used to activate secret abilities during a ‘close your eyes’ blackout stage at the end of the round – providing the chance for Batman to subdue a rival with a two pair.

Assuming all players are familiar with the basic poker combinations, it’s a clever weave of cards and social deduction mechanics that can feel a little complex at first (each player also has a once-per-game character ability to keep track of alongside forming poker hands and identifying Batman) but quickly settles into a natural flow.

One downside of the setup is that a dealer is required to replace cards spent on abilities during the blackout by walking around and silently asking each player if they wish to use their power – this can be a little awkward in less than ideal environments, and means that someone has to sit out of the exciting deliberations and resign themselves to handing out cards and announcing the results of any activated abilities. 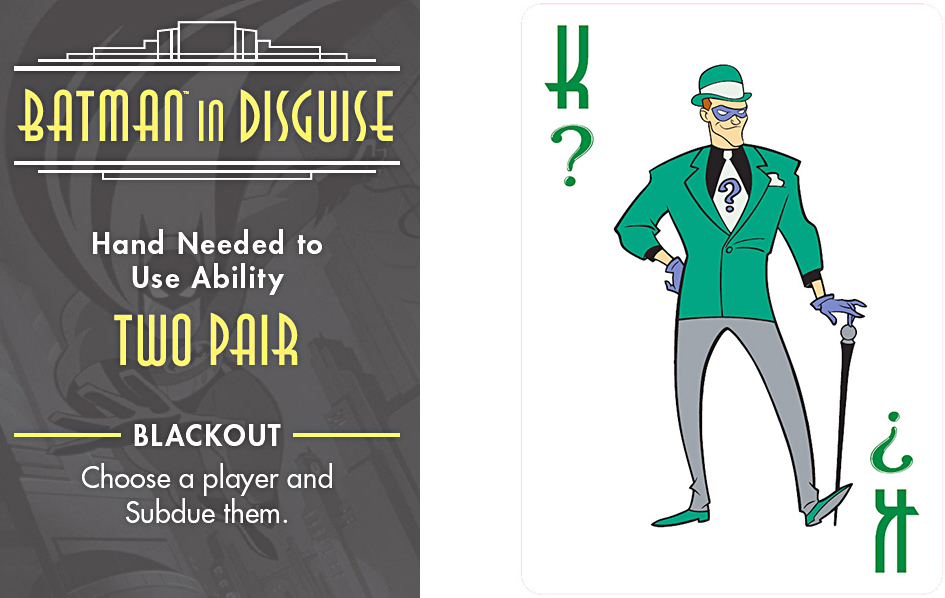 As well as falling prey to Batman, players can also be subdued by a majority vote, which is required to stop Batman and win as a villain before too many of your companions are taken out. Villains accidentally subdued by their allies are partially eliminated, losing their abilities but remaining able to discuss and vote on future debates – this resolves the tedium of sitting out completely.

The available powers all feel distinct and useful. An extra nice addition is the potential to have a player become Catwoman in disguise, who – true to the comics – is neither true hero or villain, but is secretly working to her own objectives. Bigger player groups unlock the chance to add in more powerful characters, including those with the ability to un-subdue villains and instantly subdue a suspected Batman, shifting the dynamic of the game and opening the mechanics up to greater variation and unpredictability.

Driving the game’s surprisingly deep and fulfilling gameplay along is the excellent presentation; the compact box comes stuffed with the aforementioned full deck, secret role cards and oversized character cards (plus some other bits and bobs), all of which feature the opulent cartoon artwork of the TV show alongside coherent and stylish design. It’s a real pleasure to look at and the detailed text on each card helps to smooth out the more intricate workings going on behind the scenes. The rulebook is equally fantastic, running through the basics before delving into each card’s individualities in depth.

Almost Got ‘Im is the atmospherically rich and mechanically satisfying Batman card game the Animated Series deserves, wrapped up in a fittingly gorgeous skin. The mechanics are perhaps a little too complicated to explain and set up properly just anywhere, and the need for a dealer can be a pain when everyone wants to play, but it’s an otherwise fresh and thrilling addition to the social deduction genre.

Almost Got ‘Im makes fantastic use of its Batman inspiration to offer a social deduction game that feels deep and rewarding to play. You’ll need somewhere to lay cards and someone to sit out of the action as the dealer, but if you can bring all the elements together you’re in for a fantastic night.