There aren’t many designers that can be recognised by playing just a couple of rounds of their game, but Babylonia is unmistakably a Reiner Knizia’s game from turn one. Its tile laying, area-control and pattern recognition mechanics have been perfected through games of Samurai, Through the Desert, Tigris and Euphrates and others, coalescing in the elegant, if somewhat familiar, gameplay of Babylonia.

Players are transported into southern Mesopotamia in the period of expanding irrigational systems that brought prosperity in trade and flourishing of urban life. The game is still predominantly abstract in nature, but the Western Asian setting adds its own distinct flair in ziggurat temple tokens and the map of Babylonia, impressive in both size and looks.

Each turn, players will be placing some of their wooden tokens next to ziggurats, towns or crop fields, each of which will help them score victory points in different ways. Again, in true Reiner Knizia tradition, playing Babylonia is easy: chose either noble or peasant tokens, decide between three types of locations on the map and then score if possible. However, succeeding in Babylonia will take some finesse: players will need to be good at recognising patterns, spotting the most lucrative spots on the board and take advantage of ziggurats, which grant special powers to those who have control of them. There is a certain element of luck as players draw their tokens blindly from the supply, but there is always ample opportunity to turn any hand dealt into a move that will yield results later in the game. 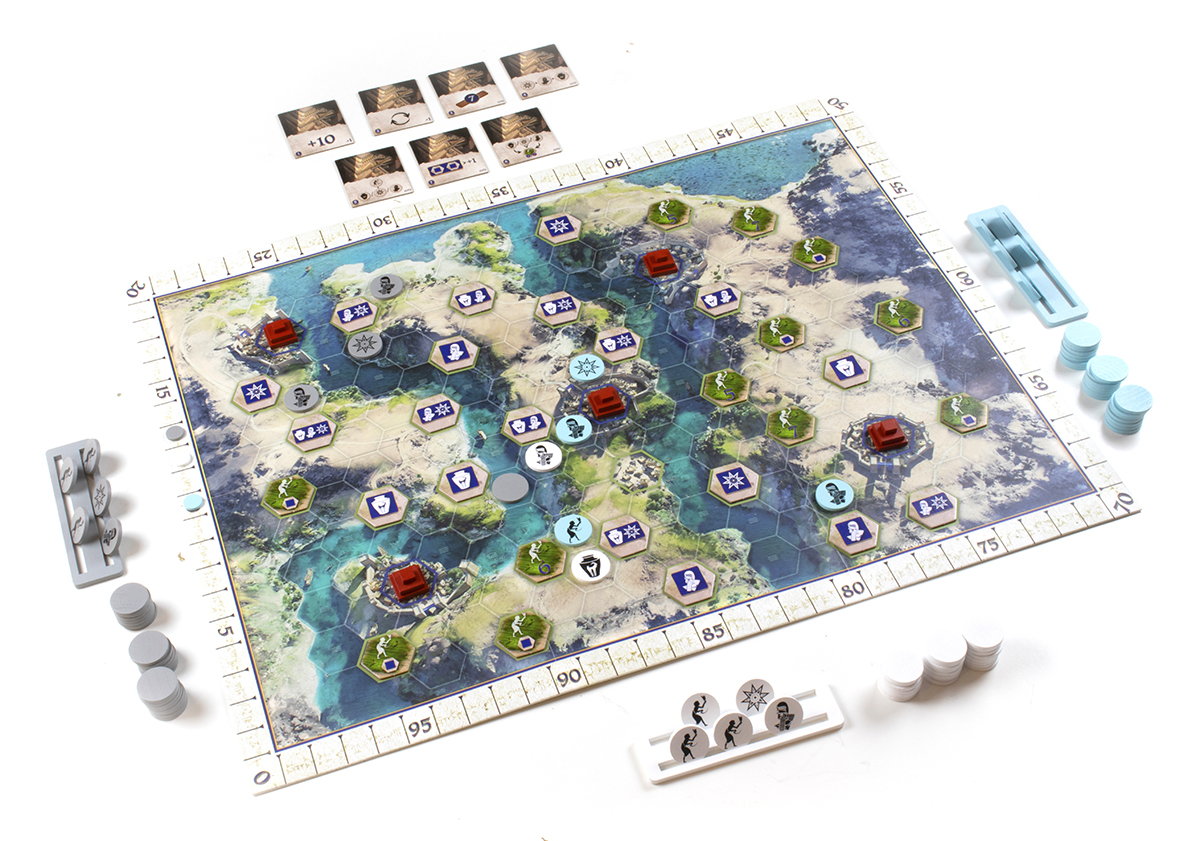 Almost everything in Babylonia is balanced to near perfection. The game flows quickly but gives enough to puzzle with, engaging all players completely each turn. There is plenty of player interaction, but it never feels forced as they naturally gravitate to compete for high-earning spots on the map. Components are simple, yet effective, generating a visually impressive smorgasbord of symbols, colours and token types on the board at the end of the game. The only misstep is the player-token stands which are meant to hold – yet never do – the tokens upright, hidden from opponents.

Yet among all the praise there lingers a concern: has Babylonia done enough differently to set itself aside from its distinguished predecessors, like Tigris and Euphrates and Through the Desert? Unfortunately, it has not. Its mechanics are not the exact replication of the previous Knizia’s titles with new stripes, but it satisfies the same game need as previous titles and in much the same way. Those who love clever area control games and pattern-building will rejoice in what Babylonia has to offer, but equally, they can play Through the Desert instead and get the same gameplay fulfilment.

Babylonia is a great recommendation for two groups of people: the fans of this prolific game designer, who will never tire of his snappy brain-scratchy abstract gameplay and those who never played a Knizia game before. For newcomers, Babylonia is a perfect board gaming sampler with flavours of challenges, puzzles, luck and strategy mixed together perfectly. It is a high bar for any board game to reach and a rare designer can boast having several under their belt.

Babylonia will not bring any surprises to players who are familiar with other games in the repertoire of Reiner Knizia, but for the ﬁrst-timers, this game is a perfect introduction.

Buy your copy of the game here

TRY THIS IF YOU LIKED… THROUGH THE DESERT

Babylonia has ziggurats and tiles and Through the Desert has candy-like camels and oases, but in terms of gameplay they have a lot in common. In both games, players are puzzling out patterns to control areas of the board  to score the most points.