Ornate bookcases, a handful of spiders, dripping candles, an assortment of wands and hundreds of peculiar books… this is the very embodiment of a magical library. In Atheneum: Mystic Library, players are students at a magical school, who’ve been tasked with sorting out the otherworldly tomes. Each player has their own bookcase in which to stack volumes taken from a couple of wonderful three-dimensional library carts.

The game is played over two ‘pick and pass’ card-drafting phases. Simultaneously, players reveal their chosen Study Cards and execute the actions shown. Each card you play, gives you benefits, enabling you to stack new books, move existing books, acquire a new wand or have a dip in the candle bag. But, in a brilliant twist, each card, which is split into sections, also rewards the players on either side of you – with different actions. So each time you select a card, you’re thinking not only about your own bookcase, but those of your neighbours too.

After actions have been taken, players may score objectives, by placing a wand on a current objective card. These cards show books of different colours placed in certain configurations. If you’ve assembled books as shown on the card, you may claim the objective. During clean-up, all four objective cards move right one place… the furthest right card becomes inactive and a new card is added at the far left. This rolling row means objectives are time-limited, creating a sense of urgency and dictating the cards you choose to draft, creating a bewitching tension. But beware, it’s quite possible to complete an objective but find yourself wandless and unable to score it before the card disappears.

Bonus points are awarded when you place books of your own colour next to each other. Completing sections of your bookcase and adorning your shelves with candles will also score you extra points at the end of the game.

Atheneum: Mystic Library presents a great puzzle. Each turn leaves you wondering whether it’s better to take new books or rearrange some. This is a tile-placement game where the challenge is not in the tessellation or orientation of the pieces (as each book is the same dimensions), but in the order that the books are placed and the configurations you are creating.

There is something utterly delightful about the activity of filling the bookshelves with “Astral Travel for Armadillos”, “Oil Painting with Dorian Gray” and “You Are More Than Undead”. This game exudes a warm and fuzzy feeling which is echoed in the mechanics. There is no competition for Objective Cards as each one can be claimed by every player and each Study Card provides only benefits, no penalties, meaning you’re always pleasantly surprised by the gifts from left and right.

Sometimes you get a dip in the bag. Each bonus tile found within can be used in two ways –for its special ability or as a candle, which gives end-game points. Special abilities may provide a paired set of books to shelve, a ‘wild’ book of your choice, a side bookcase (increasing your shelf space), a magic wand or the ability to re-shelve some books. Upon completing each section of your bookcase, you evict the resident spider, giving you a choice of benefits. Again, it feels like you’re being showered with goodies.

It’s a wonderful theme, so why not dive into it? Put on the Harry Potter soundtrack, dim the lights, pour the mead, light the candles and make sure you announce the name of each book you shelve in a ghostly voice. “Making Hand Soap From Hands” anyone?

Athenium: Mystic Library is a solid gateway game – easy to learn and quick to teach. With simultaneous play and a total lack of conflict, it also works really well for families. It’s competitive, but always with an obvious overtone of generosity and abundance.

TRY THIS IF YOU LIKED:  7 Wonders

Atheneum is not an engine builder, but the ‘draft and play’ action and the interaction with immediate neighbours smacks of the popular classic. 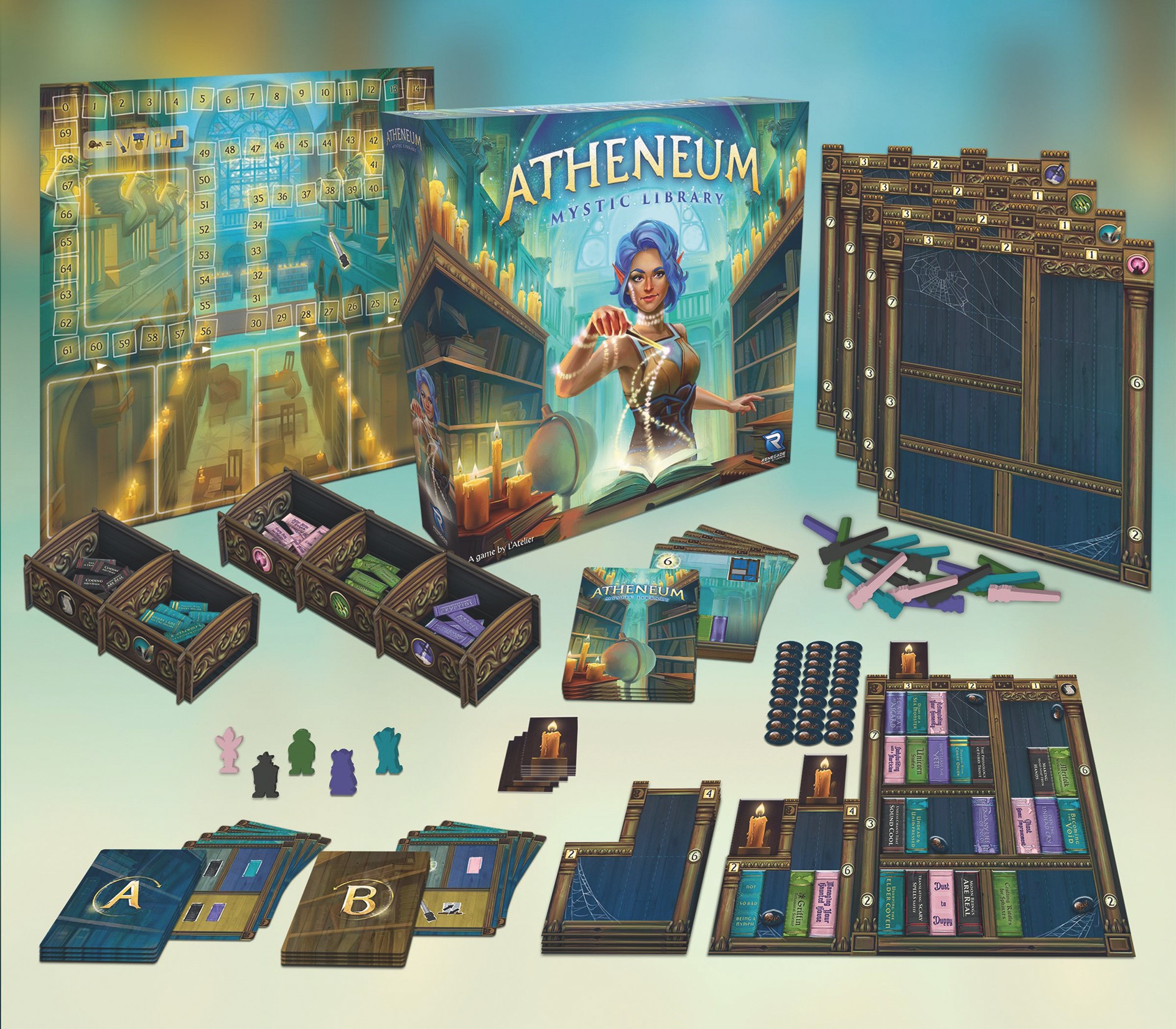