All hands on deck

Just two years after the game-changing arrival of Dominion in 2008, a group of Magic: The Gathering Pro Tour champs, including Justin Gary and Rob Dougherty, got together and created their own deckbuilding franchise with Ascension. This epic-steam 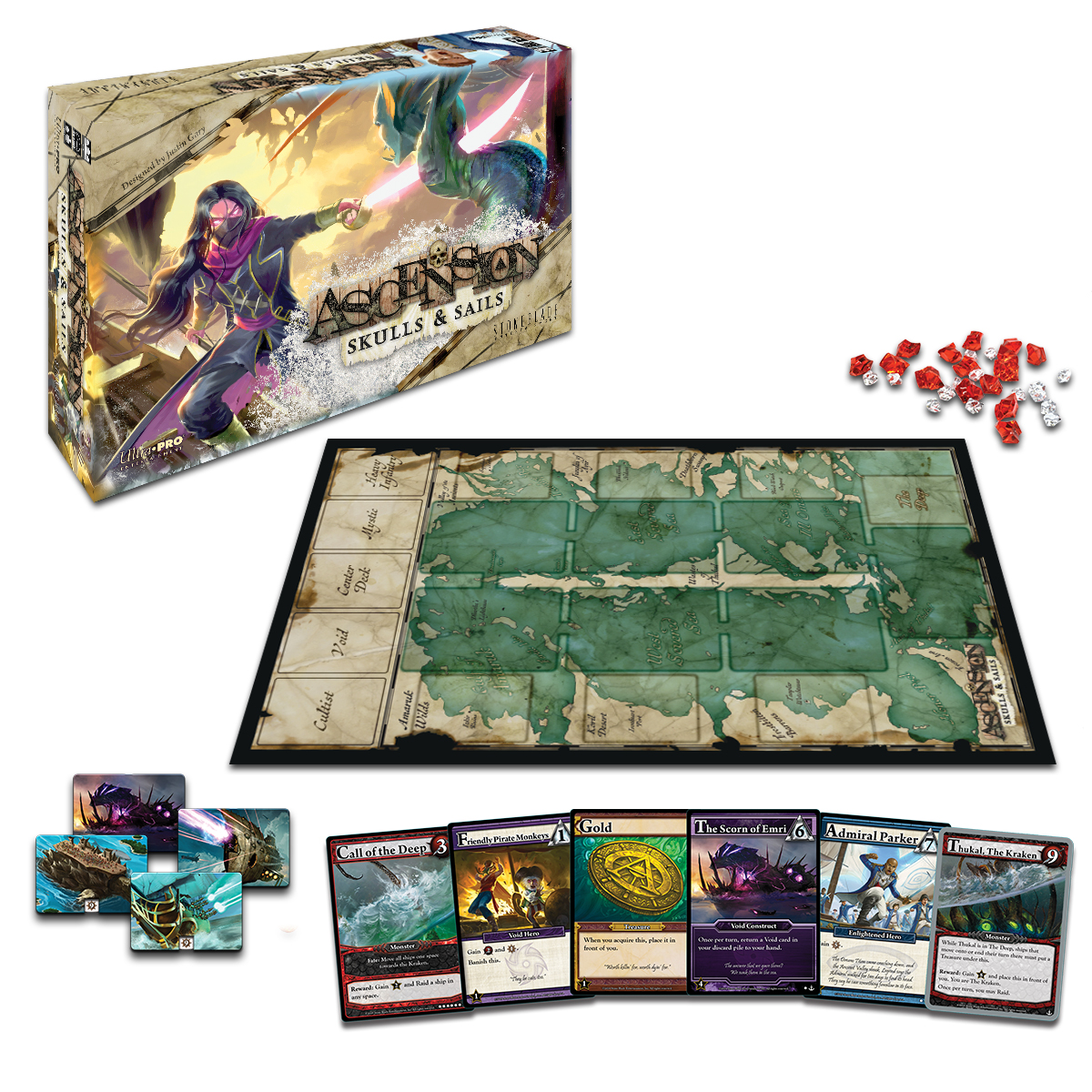 punk-fantasy themed game is similar to Dominion not only in its use of the mechanism invented by that game’s creator Donald X. Vaccarino, but also in the sheer volume of expansions since published: 15 to date, with Gary’s nautical-flavoured Skulls & Sails the 14th of the franchise.

The bulk of Skulls & Sails’ gameplay is deckbuilding at its most fundamental: play cards to either recruit new crew for your Severed Sea-sailing battleship or battle monsters that have risen from the murky depths. The latter earns you honour, drawn from a limited pool whose size depends on the player count. When that pool runs out, you finish the round and tot up who has the most honour to determine the winner. As you’d expect, it’s not the biggest deck that wins, but the leanest and most effective, so banishing weak cards is as important as gaining cool ones.

However, taking its cue from the likes of Tyrants of the Underdark and Hand of Fate: Ordeals, Skulls & Sails tethers its decks to a board-based element, which helps recommend it as a standalone game that’s accessible to Ascension newcomers who like a little twist to their deckbuilding.

Each player chooses a ship, which they place on one of seven spaces at the game’s start, and can move one space at the start of their turn, before playing cards. Your ship provides an alternative way of recruiting and attacking via its Crew resource, which is tracked by a dial on the ship’s counter, and can be earned in a variety of ways, depending on which cards you gain and how you play them. While this adds flexibility in one sense, using Crew is limited by your location; you can only gain or defeat a card whose position in the confusingly named “Centre Row” (which is actually split in two halves on each side of the board, go figure) sits alongside your vessel’s location. That said, certain cards offer an “Anchor” bonus, which you can only earn if you use Crew to gain it, adding another welcome element. Ships can also raid each other – you may take-thattily nab some treasure from a rival by using the action (if available on a card you have in hand) when you share a space with them.

Finally, there is the Kraken. Lurking at the bottom end of the board, this powerful beastie will gobble treasure from anyone who lands on it, with many monster cards forcing players to move towards the watery behemoth, as if tugged by a malevolent undertow. But whoever defeats it first gets to become the Kraken (somehow), allowing them to raid whenever they like and turning the latter part of the game into something of a chase.

While these new elements are well implemented (though the way other players can gain your choice of ship as a powerful card is a little vexing), Skulls & Sails is never going to win over players who either don’t like deckbuilding or have grown bored by deckbuilding games. By the same token, of course, if you’re a fan of the genre, it is pretty much guaranteed to please.

If you absolutely love deckbuilding, or are interested to try it out, upgrade the above verdict to a ‘Yes’. Otherwise, this might be a boat you can live with missing.

TRY THIS IF YOU LIKED TYRANTS OF THE UNDERDARK…

Like the D&D-themed deckbuilding/area-controlling hybrid, Skulls & Sails brings in a bit of board-based antics to pep things up.