A frighteningly strong return for a horror legend

Arkham Horror is a game with decades of history, from the 1987 original to the entire universe of Arkham Horror Files titles that have followed it through the rift from the realm of nightmares to our own. Unafraid to strike out in a new direction for the game, its third edition deepens the enthralling (pun intended) richness of its theme, expanding the scope of the stories players can tell while managing to condense its epic gameplay into an even more approachable form.

If you’ve touched one of the Arkham Horror Files games before, you’ll be in familiar tentacled territory here. Arkham Horror shares much of its core concepts and gameplay with the wider Lovecraftian series that takes its name, reimagining the storied horror adventure game with some of the successful modern inventions of its descendants. Particularly effective is the borrowed Mythos phase system from Arkham Horror: The Card Game, with drawing tokens from a bag or cup (the absence of a suitable vessel in the box is one of its few letdowns) to spread doom, spawn monsters and generally add drama to the troubled streets of the Massachusetts locale providing an unpredictable but cleverly managed way of keeping the odds you’re facing feeling perilous yet fair.

Designer Nikki Valens, whose near-peerless mastery of Lovecraft on the tabletop includes Eldritch Horror and Mansions of Madness’ second edition, has seemingly looked beyond Arkham Horror Files for inspiration, too. In a nifty system recalling the narrative might of the Fallout board game, a deck of event cards specific to each scenario seeds specific encounters into separate decks of cards for each neighbourhood, which players’ investigators then experience as they traverse the board. At certain points these cards, which double as a way of directing the spread of evil, are even shuffled back into the top of the deck, Pandemic-style, to up the dread of a second arrival of doom to end the world – and game.

The result is that, compared to Arkham Horror’s more generalised acquisition of clues, there’s a greater sense here of unraveling the particular mystery central to each scenario. The interlocking story gears then turn the machinery of another deck of narrative-heavy cards known as the archive, which propels the overarching plot along branches that split naturally based on players’ successes and failures. These cards can even shift the objectives required to triumph, preventing the game state becoming stale or frustrating at any one point.

Even with its more abstracted take on the city’s layout through its modular board sections, this Arkham Horror’s greatest strength lies in the sense of tense atmosphere and player-driven storytelling it achieves through an remarkably well-realised analogue system. This is all without adding unnecessary intricacy – in motion the meshed mechanisms run smoothly from turn to turn, though preparing the curated selections of cards can be a little fiddly during setup at first.

Tying story beats to the dice-rolling tests needed to acquire clues can occasionally suffer at the whim of those six-sided cubes. Failing a test reseeds the clue card into the top three encounters of the neighbourhood, requiring an investigator to pace around the same areas while waiting for the clue to reappear, which causes the race-against-time desperation of the story to stumble a little. Luckily, the ability to prepare for the reoccurrence of a test by focusing abilities – granting extra dice and rerolls – stops the turns in-between feeling useless. There are still small irritations at points when it comes to the limitations placed on players: the inability to repeat actions can make fighting monsters and warding off doom a little drawn-out when faced with naff roll results, but is generally appropriately balanced with the option to flee or buff future attempts. It wouldn’t exactly be a proper Lovecraftian game if you survived the first time, right?

For all the added narrative heft Arkham Horror’s third edition brings to the table, Valens has resisted blowing out the traditionally sprawling experience to monstrous proportions. In fact, beyond the slightly nitpicky setup, the improved story-led structure means it feels strikingly focused. While its conforming to some of the Arkham Horror Files series’ shared mechanics means it’s less distinctive from a gameplay perspective, its standout handling of the universe’s already entrancing mysteries grants it a power that makes a return to Arkham a scarily good one.

Arkham Horror's third edition takes some of the best elements of what’s come before in the venerable series and evolves them with a refined focus on story and mystery. The result is one of the most captivating portrayals of Lovecraftian horror on the table to date, even if the gameplay isn’t quite as revolutionary. 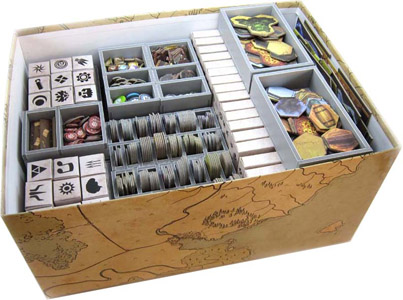 Compatible with Arkham Horror Third Edition®, including the Dead of Night® expansion.