"Curse your sudden, but inevitable betrayal!"

Picture the scene, if you will… a city has become overrun by monsters and it’s up to an unlikely alliance of guilds to sort it all out. One of the adventurers and a member of the Panda Guild, Greensleeves the elf (bearing an uncanny resemblance to Orlando Bloom as Legolas) is zipping throughout the city shooting arrows into hapless orcs and goblins. “Woo, this is great,” he boasts to Grom, a member of the rival Lion Guild temporarily forced to work alongside the Pandas to complete his mission, who grunts in reply as he staves in the head of an enemy.

The pair charge down an alley towards some treasure, which Greensleeves snatches up from the floor. “Woo-hoo,” he cries, “we’ve found some gold!” Grom grunts while Greensleeves turns ready to face off against another group of orcs. “Come on Grom, lets… bleurgh…” A blade erupts from Greensleeves’ chest and he falls to ground. As he lies there prone he looks up to see Grom clutching the bloody sword. “I thought we were working together,” cries Greensleeves. Grom answers with a grunt and snatches the gold from the elf before dashing off.

You see, although Arcadia Quest seems like a co-operative dungeon crawler in the vein of Super Dungeon Explore, it’s more a game about secret plots and dirty tactics. One minute different guilds can be unlikely allies working alongside each other to beat a common foe and the next they’re stabbing each other to accomplish their own mission. Arcadia Quest is about keeping your friends close… close enough so you can bump them off easily. 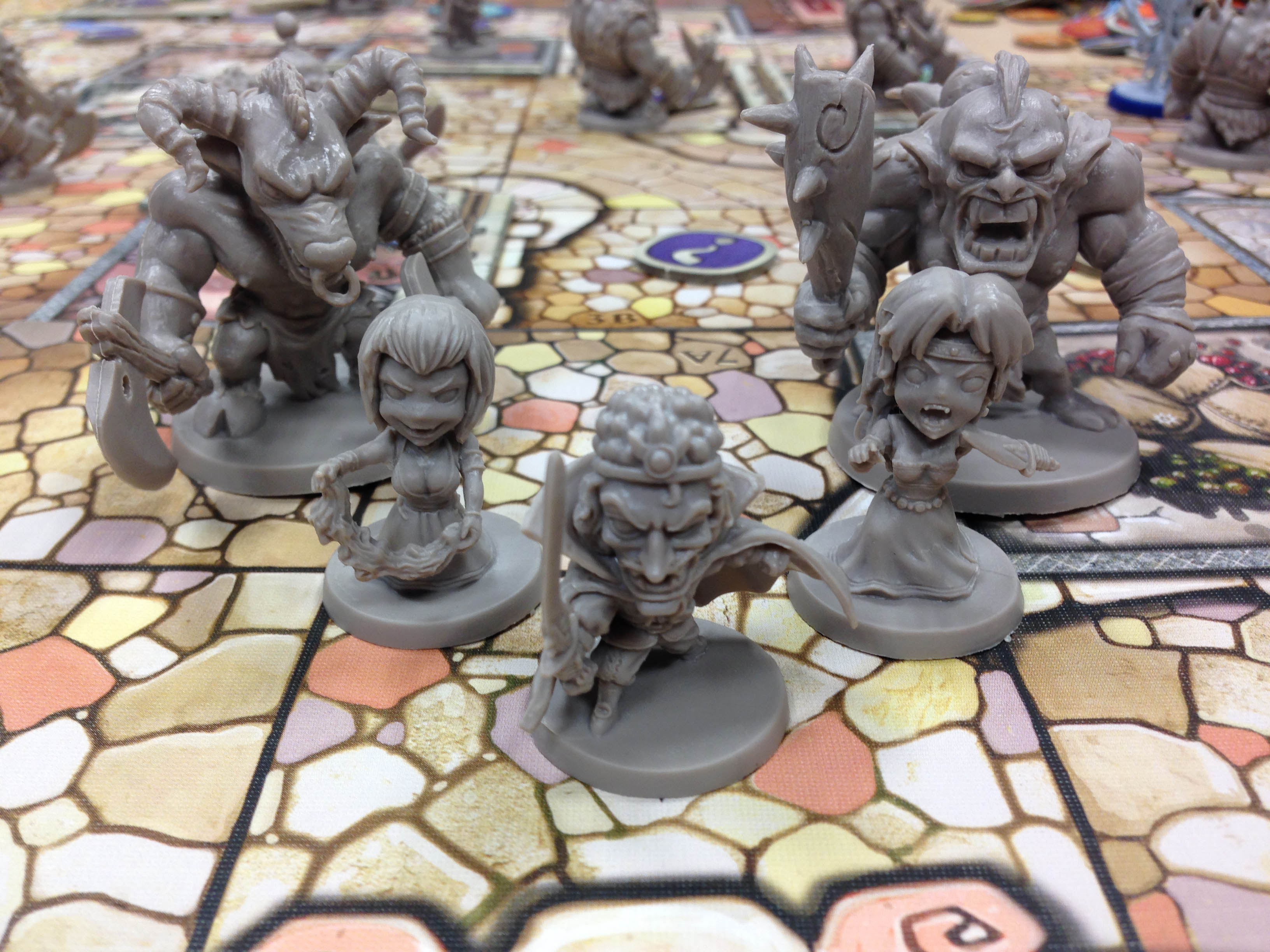 Your experience of Arcadia Quest begins by choosing the members of your guild. The game comes with 12 different heroes, including typical fantasy tropes like Greensleeves the aforementioned elf, an angry dwarf called Spike and Wisp the thief. Each of the heroes has different innate abilities that will effect the way they play, e.g. Grom rolls an extra die when he’s wounded, Maya the ice mage can use magic attack cards twice, while Greensleeves can score an extra hit depending on his attack roll. Putting together your guild is important because you want to make sure you’re going to be balanced and aren’t just putting all your eggs in one big bashy basket.

One of the great things about the game is that your guild will grow in experience as you progress throughout the game’s six missions. You see, in a similar vein to something like Warhammer Quest, Arcadia Quest involves taking on a number of increasingly complex missions before you eventually go up against the big bad guy himself, Lord Fang, who has taken over Arcadia City with his scores of monsters. So, although initially your heroes may only have access to fairly simple weapons like a rusty blade, eventually they’ll be able to use the powerful Frostbite sword. As a result, over the course of play throughs you’ll grow to love your guild, which will make it all the more painful when they’re inevitably betrayed.

Once you’ve chosen your guild it’s time to get some action. Arcadia Quest comes with a number of different missions that are all explained in the Campaign Book. Depending upon the mission, you’ll get a set layout to build with the game’s gorgeously illustrated play tiles, along with locations of where to place treasure icons, objectives and enemies. One thing to note is that it can take a little time to get everything set up (particularly on the first play through) so set plenty of time aside.

However, once you’re up and running, things get much easier to handle. Up to four guilds can play at once and each player’s turn sees them activating one hero. During that activation a hero can move up to three spaces, attack or move and attack. Your attack value depends upon the weapons you have equipped, e.g. a parrying blade gives you two attack dice to roll, whereas the rusty knife has three attack dice. The dice themselves have three different symbols – a sword to represent melee attacks, a bow and arrow for ranged attacks and a kind of explosion for critical damage. Critical hits count as a success and allow you to re-roll a die. The aim is to try and beat an opponent’s armour value. Do that and you’ll be rewarded with gold, which goes towards your final score. It sounds overly simple, but having such straight forward dice makes combat a breeze and saves any potentially time-consuming faffing about working out attack values or the like. Just look at your weapon, check the amount of dice and off you go. Fans of Heroquest will certainly feel at home here.

One thing to note, however, is that after weapons have been used once they become ‘exhausted’ and can’t be used again immediately. Instead you’ve got to rest your character, which allows the weapon to be used again. This means you’ve got to make a choice about when to use more powerful attacks – is it worth saving them for a killer blow or using them straight away? 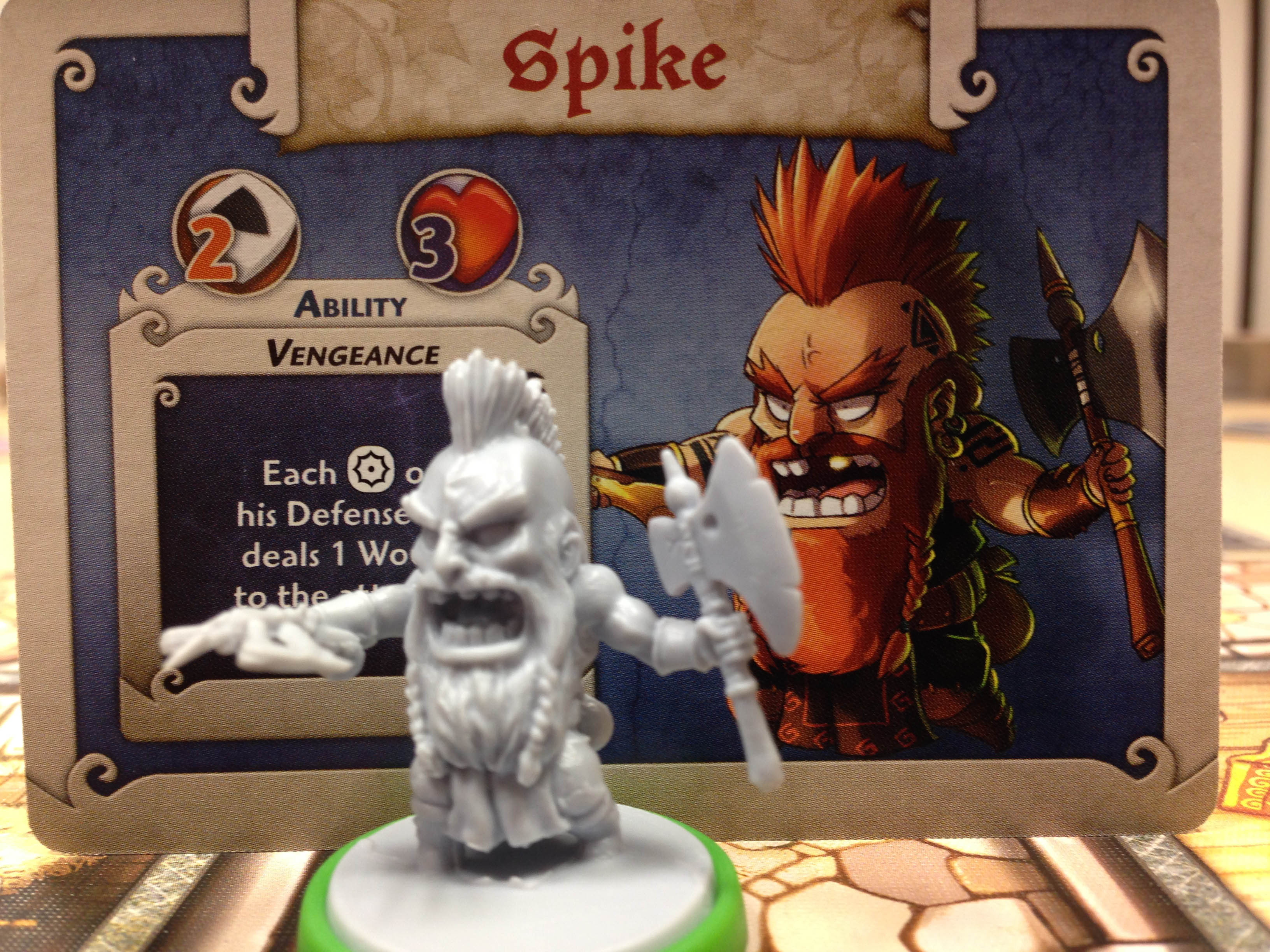 Something that is unusual to some other dungeon crawling games is the way the monsters work in Arcadia Quest. During the set up phase all the monsters are clearly placed on the board so you can see exactly where they all are. During a normal turn they won’t actually do anything, they’ll just sit there looking angry. Instead they’re only activated if a hero passes them and then they spring to life and attack immediately. If you’ve played any of the Zelda videogames, they’re a little like those statues that only start moving when Link goes near them.

Another interesting element is that as monsters are killed and removed from the board, instead of going straight back into the box, they’re popped onto the Spawn Tile… a kind of dugout for bad guys. Once the Spawn Tile is full of five monsters, they’re then spawned back into action. The player rolls two attack dice, which determines where the monster is spawned and the process is repeated for all five enemies in the Spawn Tile. This can create some amusing moments when a player has removed a horde of enemies from a room only to be surrounded by monsters once again.

Along with killing monsters, the other objective in Arcadia Quest is to… well… complete objectives and this is where things can get a little backstabby (that’s definitely an adjective). Some missions require you to find a particular token on the board, while others can only be achieved by killing a certain number of monsters and then there are rewards for killing members of other guilds. Whoever completes an objective first gets a bonus coin but anyone who completes a quest receives a gold coin regardless.

Things certainly get tactical when completing quests because you can choose the order in which you complete them…and can also try to scupper your opponents. Say there’s a mission to get to a certain token, you could try and block another player reaching the token or just kill them when they come close. Then again there could be moments when it’s actually beneficial to work with a rival guild member to try and take down a stronger foe because whoever lands that last killer blow receives the experience. Then, of course, you can potentially turn your attentions onto the guild member who was previously your ally and kill them.

Getting killed doesn’t mean it’s game over for a hero though and they can return in the next mission. Instead they’re given something called a Death Curse, which potentially restricts their ability to level up before heading out on the next monster killing quest. Depending upon how many times the hero in question has been killed, they must draw the same number of Death Curse cards. Some Death Curse cards have no effect, while others can restrict your amount of equipment or attack power, for example. Luckily the Death Curse only lasts one round but you’ll certainly be out for revenge against the person that dared to kill you.

One of the most appealing elements of Arcadia Quest is the huge amount of replayability and this is a game you can return to again and again. A campaign sees you completing six scenarios but there are a total of 12 different scenarios to choose from, plus the fact you can make up the guilds with different members ensures you can keep things fresh and mix things up a little next time. What’s more, there’s the fact that heroes level up between scenarios. One play through may see you failing to complete a lot of objectives, which means your characters are stuck with the basic equipment but the next time you could be brimming with powerful spells or weapons. 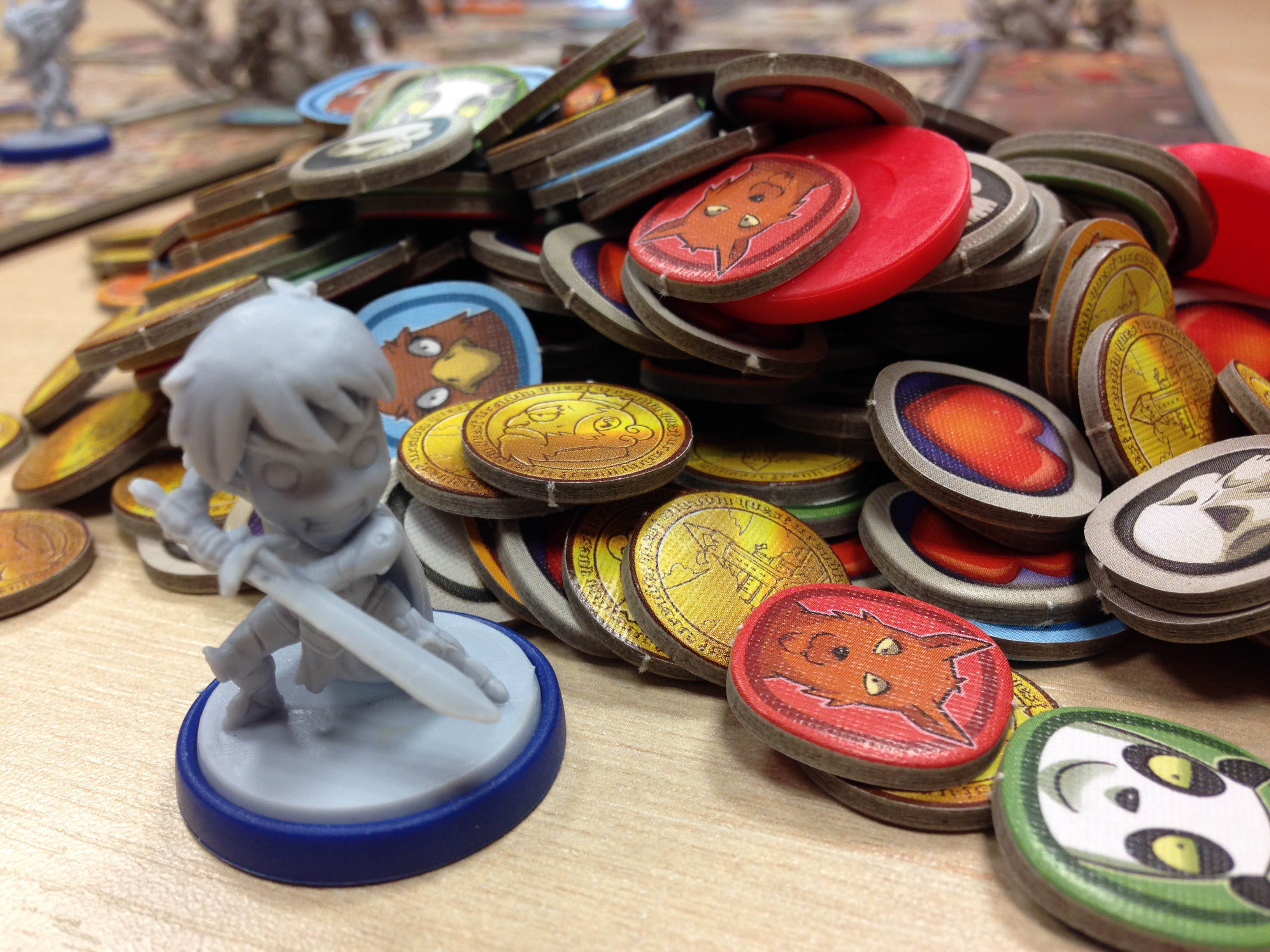 Another nice touch from publisher CoolMiniorNot is the inclusion of blank Arcadia Quest cards on its website. Don’t like the missions in the box? Well, what about creating your own? You could make things tougher for an experienced group of gamers or keep things simple for newcomers. Arcadia Quest is really one of those great games that has such tight, basic gameplay that it’s easy to build upon those foundations and customise the experience. There are even blank hero and monster cards, allowing you to bring in your favourite miniatures from other games.

Ah yes, the miniatures. For some Arcadia Quest is likely to split opinion. If you don’t like the sudden rise in popularity of so-called ‘chibi’ or cute models then this isn’t likely to change your mind. Although really we wouldn’t really described the anti-heroes of Arcadia Quest as cute… many look like they could be villains as well as good guys. However, if you’re a fan of anime-style miniatures then these really are some of the best around. They come pre-assembled in the box, so there’s no mucking about putting them together and the detail is exceptionally sharp. In fact, all of the components from the lavishly detailed board tiles to the miniatures themselves are exceptional and show why CoolMiniorNot is such a big player in this market.

Arcadia Quest really isn’t your typical dungeon crawling fare then. Although initially it may seem like Descent or Super Dungeon Explore, the player versus environment mechanic seen in those is combined perfectly with the player versus player elements too. Yes, you’ll make some uneasy alliances and, yes, it’s likely you’ll be betrayed by your ‘allies’ at some point… but at least you know you can get revenge in the following scenario!