The weight of responsibility is on your shoulders. As king of a watery realm, you must explore the seas to gain resources and increase the prosperity of your people. You’ll use the powers of the mantas and plunder undiscovered locations on your quest for greatness. But, get too distracted by the strange creatures you meet along the way and you’ll find yourself swimming in circles. 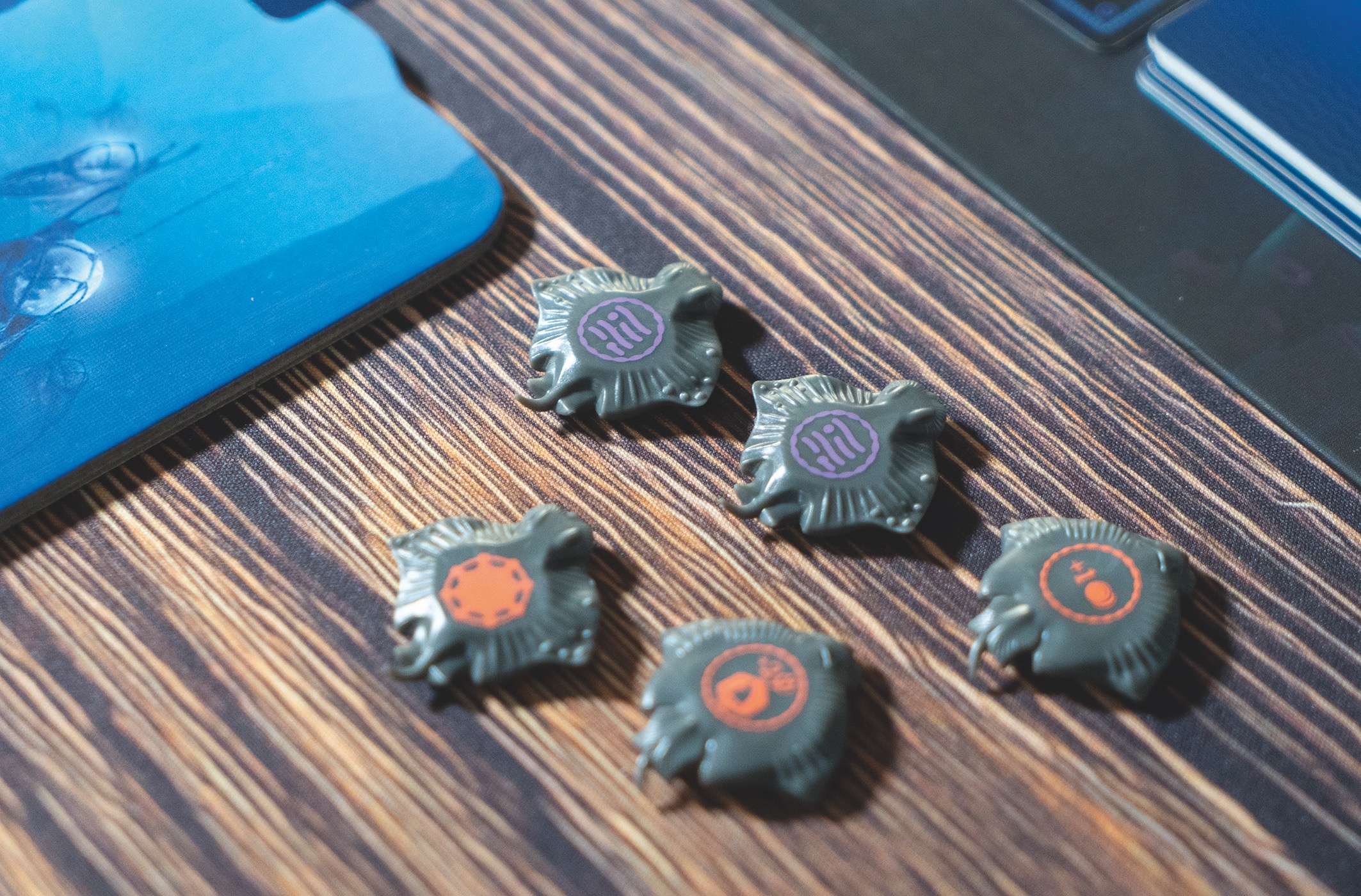 In Aquatica, each player starts with a set of identical character cards and a King card, allocated by turn order or drafted from a selection. On your turn you must play one character card from your hand and fully execute the action shown on the card. Different characters give different actions. The Blue Water’s Agent enables you to recruit another, more powerful character from a line on the board, the Legioner gives you power to conquer locations and the Matrona acts as a reset – enabling you to pick up cards and reuse benefits from your shoal of mantas.

Your player board has five slots for locations that have been bought or conquered. Each location shows a number of ‘depths’, some which contain resources or benefits. Upon acquisition, slide the card inside your board so the topmost depth is just visible and the card above is hidden. Items displayed on the top level are available. Coins and power assist in acquiring more powerful cards while other effects can be used as additional actions – raising or scoring locations and recruiting or reusing characters. When an effect or resource is used, the card is raised, allowing you to access the lower depths. Once a card is fully raised, you must score it to gain victory points.

Victory points are also acquired by achieving goals, four of which are selected at random at the start of the game. The first player to achieve a goal gets the most points. The goals are often at odds with one another, so it’s likely that different players will take the high points on each goal.

There’s an interesting relationship between the number of depths on the cards and the benefits they contain. Some cards contain empty depths which must be raised in order to access deeper treats and score the card. So there’s much to consider when choosing a location. Avoid being left with multiple locations with empty depths and no way to raise them. When your board gets full you can’t take new locations until you’ve scored your existing ones and it’s possible to be left with lots of power and money that you can’t easily use, forcing you to waste valuable turns clearing them.

It’s crucial that your location cards work in combination with each other – allowing you to use one card’s benefits on another and ideally chaining them to raise and score cards as quickly as possible, which of course is endlessly gratifying. Well-timed manta-flipping could trigger a whole new chain-reaction, enhancing your turn and giving you an air of smugness. The flipside of this is the crushing frustration of taking just one action on your turn. Thinking several turns ahead will undoubtedly give you an advantage.

Despite being a light game, Aquatica contains some interesting strategic choices. Low-scoring locations may accelerate your progress towards goals, but the extra points may not be enough to put you ahead. Valuable locations will have more depths and with poor planning could languish on your board unscored. Proper deck-building, by recruiting new characters, requires an investment of time. The benefits these characters bring must outweigh the time used to acquire them.

If the location deck is exhausted, end-game is triggered and forcing end-game could form part of your strategy. By repeatedly using the ‘scout’ action on your Sea Horse and a couple of Sneaky Eels you’ll cycle through location cards while other players look on in dismay, especially those playing a longer deck-building strategy. It doesn’t feel right that this is possible – it’s a wholly unsatisfactory way to end the game.

Despite the beautiful art and interesting characters, it’s easy to forget that you are an underwater king trying to find resources for your realm. Locations are not static, so it just feels like you’re just trying to grab stuff rather than going on an interesting adventure.

TRY THIS IF YOU LIKED:  Century: Spice Road

Century Spice Road fans will recognise the card management and acquisition mechanics. Though Aquatica is a more in depth game with arguably more interesting choices.