Racing is one of the oldest board game themes, so it’s surprising how often we see new mechanical variations. Dice rolling, deck building, even token flicking, there are constantly new ways of getting from A to B the fastest. For the last few years Carla and Jeff Horger have been releasing their own hand management system of precision pole positioning, with Thunder Alley and Grand Prix showcasing a more calculated approach, adding a layer of strategy and contemplation to motorsports. Then they thought “why not strap a missile launcher to this hotrod” and Apocalypse Road was born.

A post-apocalyptic racing game for two to a staggering ten (ten!) players, Apocalypse Road pits players as teams of madcap racers looking to cross the finish line by any means necessary. Each round sees players taking turns to activate one of their team’s surviving vehicles, choosing to move and shoot in whichever order they prefer.

Everyone has a hand of six movement cards, which designate how much extra speed your vehicle gets, as well as which rules apply to it. The majority of cards won’t just move the active car, but also push vehicles in front or bring ones directly behind along for the ride, ensuring that all cars are constantly careening towards the chequered line. Faster moves will also cause event cards, which can sometimes damage or weaken the active car or others.

The most common way of causing damage however, is shooting. Each vehicle has its own weapon and threat area. Whenever you want to shoot a valid target, turn over the top card of the combat deck and compare the strength to a vehicle’s toughness. If it’s the same or higher, you hit and deal that weapon’s damage, with six damage total knocking out a vehicle permanently and earning you a victory point. As completing a lap is the only other way to gain VP, vehicular violence is commonplace if you want to win.

Once every vehicle has been activated once, the VP requirement for victory is dropped by one (unless someone is already on “match point”) and you carry on with whoever has the most damaged active cars going first.

The game finds a nice balance between randomness and strategy. Once you get your head around the colour coded shorthand on movement cards, the lack of extra complications lets you focus wholly on creating movement combos, trying to get as many of your team’s cars working in sync, whilst combat and movement events add a splash of chaos like oil in a roller rink, keeping things from being perfectly calculated.

Unfortunately, it’s the gap between your own turns where this racing game slows to a crawl. Racing games work best when turns are quick and actions quicker, but the nature of needing to determine the best possible movements and turns being impossible to do simultaneously, ensures near constant downtime. Whilst you can play with up to ten players, most of my group found it slow at half that many, with others barely surviving the lengthy explanation of decoding movement card iconography. The game’s combat can also feel at odds with the driving mechanics, often feeling like someone added house rules to either of the previous two games in the series, instead of capturing the crass thrill of a death race.

Fans of the series will appreciate the new maps and ways to revitalize their previous purchases, while driving enthusiasts may still appreciate having a party game that rewards forward thinking. Fitting for a post-apocalypse though, it’s a little too dry for some.

Some may find the downtime too long to stomach, but those who persist will find strategic positioning gameplay with a smattering of violence to amuse.

TRY THIS IF YOU LIKED Formula D

One of the biggest names in tabletop racing, Formula D takes “Roll and Move” to its logical extreme. If you prefer picking cards to rolling dice, then Apocalypse Road is a clear winner. 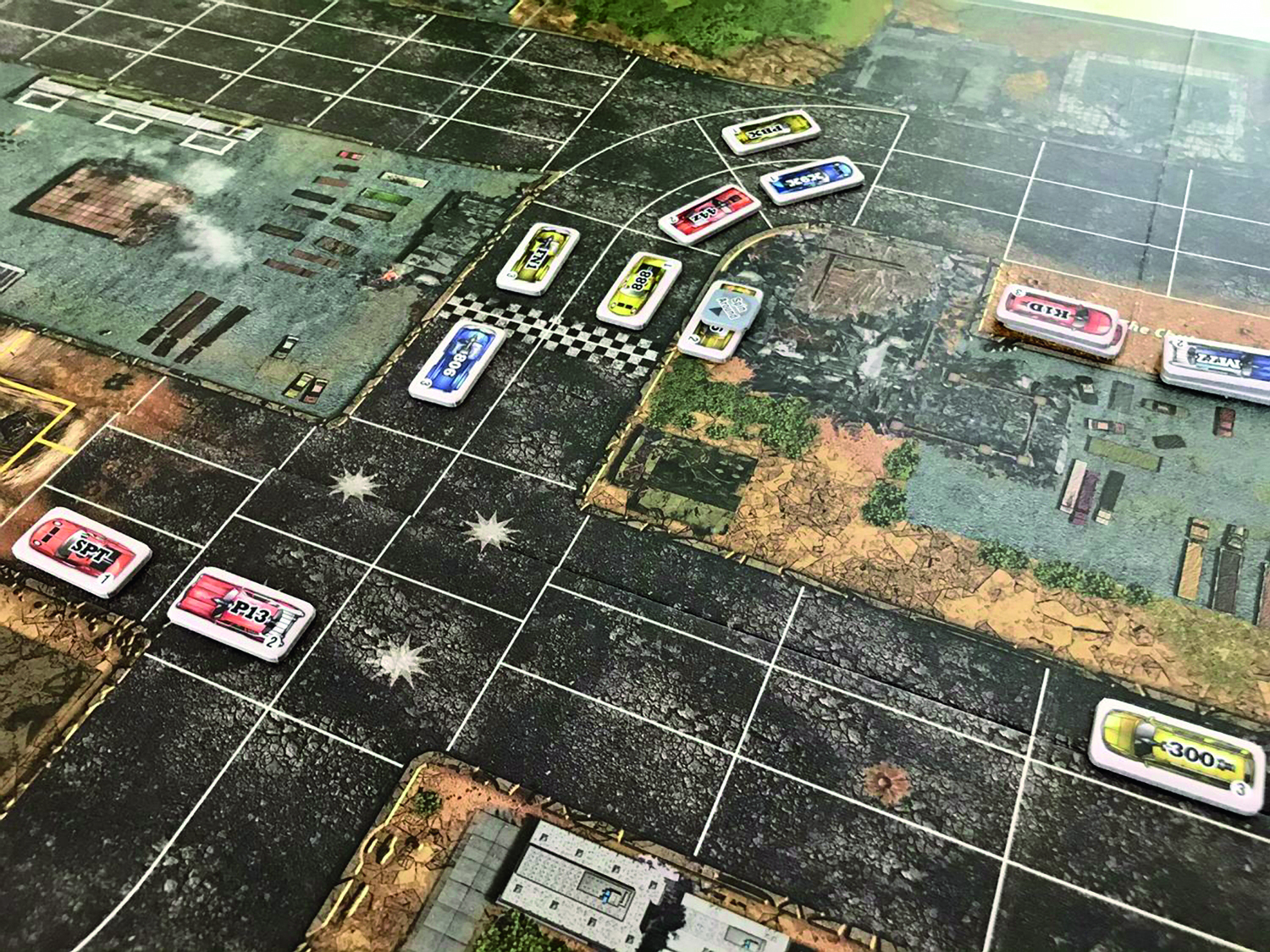