At a surface level, it could be very easy to dismiss Aeon’s End. “It’s a deckbuilder with a fantasy theme – yawn,” you might say, offering up thematically richer offerings such as the licensed words of the Legendary series or games that evolve the deckbuilder concepts with deeper mechanics, such as Tyrants of the Underdark. You could even suggest that when it comes to fantasy deckbuilding, nothing tops the game that spawned the genre: Dominion.

While Aeon’s End may not conjure instant admiration for its ostensibly generic fantasy setting and seemingly back-to-basics deckbuilding gameplay (you’ll find no area control here), once everything’s in motion its deeper complexities reveal the game to be a highly satisfying, subtly deep and surprisingly original creation.

Admittedly, the thematic dressing remains largely by the numbers: a group of mages gang together to defend the remnants of society from invading forces of demon-like fantasy monsters and a big bad. This is counteracted somewhat by the beautiful illustrations and effectively-written lore text on all of the cards and components, which bring to mind the captivating worlds, spells and creatures of Magic: The Gathering and help to freshen up the stuffy fantasy tropes.

The monster in charge – known as ‘The Nameless’ – can be one of four different beasties, ranging from a rage-fuelled lizard-devil that dishes out powerful strikes to a creepy-crawly bug queen that gains an extra board to summon hordes of extra minions. The automated decks of cards that power the nemeses are a mix of shared and specific abilities alongside smaller enemies and offer up a varied selection of different strategies for the human players to deal with. While the rules for each Nameless vary, they are triggered using a similar structure and fully spelt out on the cards and boards, making it easy to get to grips with their distinct play style. There’s also a handy difficulty grade for each boss, as well as optional variants for a harder challenge for those who master the standard versions. 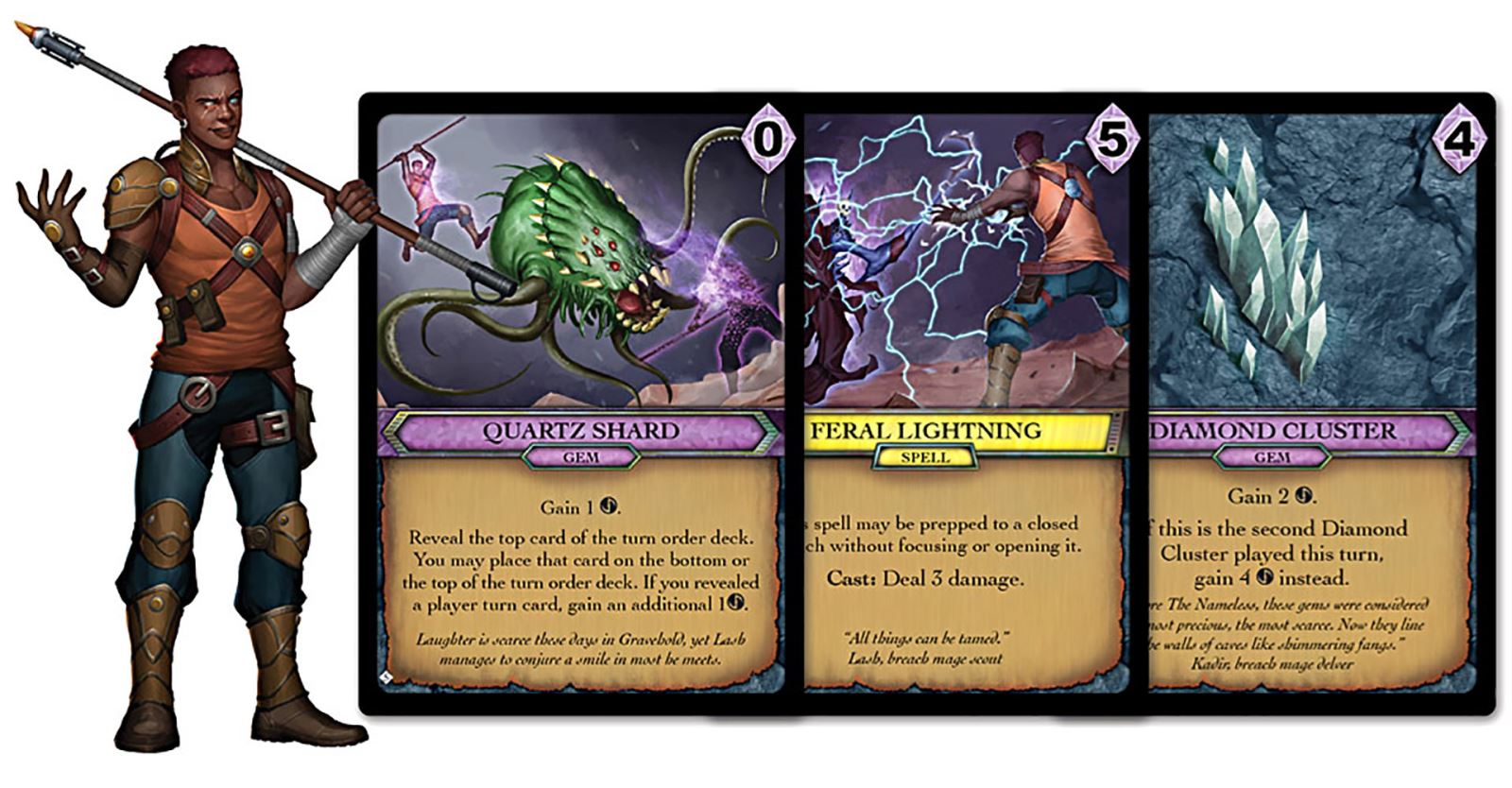 On the human side, the mages are equally varied, with unique talents, setups and starting decks. A familiar deckbuilding framework – use gem cards to purchase new cards from a central marketplace – is augmented with the use of breaches to cast spells. The breaches run along the top of each mage’s board and can be focused or prepped each turn – focusing turns the square cards 90 degrees, which reduces the cost of opening the breach later.

Spells must be prepped to a breach to activate them on a subsequent turn, but closed breaches must be activated immediately the following turn, while using opened breaches grants the choice to save up handy spells for later on. More expensive breaches also grant damage boosts to spells once opened, offering a strategic reason for investing in them early to whittle down the Nameless’ health. Combined with the ability to purchase increasingly expensive cards, this helps to capture the feeling of wielding stronger magic as the game draws on, as well as increasing the tactical options available – shall I save this more powerful prepped spell for the Nameless once I’ve used weaker attacks to eliminate their underlings?

There are two quite markedly different changes to the standard deckbuilding formula in Aeon’s End. The first is that discard piles are never shuffled, but instead flipped upon exhausting the draw deck. Players have the choice to discard cards played during a round in any order they want, while cast spells and newly-purchased cards immediately join the pile. This gently introduces more considerate play, as a well-organised discard pile can be key to acquiring better cards and pummeling enemies with spells without diluting a deck with superfluous copies of the same cards. The second alteration is that unused cards in a hand aren’t discarded, which makes it easier to craft an effective flow of gem and spell cards from turn to turn.

With no shuffling in the player’s decks, the random element of deckbuilding is instead transferred over to the order of each turn. At least one card per player and two nemesis cards are shuffled at the beginning of each round and drawn one at a time, which dictates the flow of the turns. This can result in devastating situations – two consecutive Nameless draws can decimate unprepared players – but forces players to think ahead while maintaining a genuinely tense and unpredictable atmosphere; drawing sequential player cards leads to plenty of exciting moments as spells are prepped and pop off in rapid-fire succession. The level of player interaction between mages – cards can heal, buff and even cast on their behalf – results in a true feeling of co-operation, rather than four mages working to their own ends, as can sometimes happen with deckbuilders.

Aeon’s End’s mechanics and concepts are executed with such confidence that it is very easy to jump into a game and understand what’s happening at any moment.

Even though it’s painless to go in completely cold, the box comes with three pre-prepared decks that ease new players through a first setup and full game. It’s an admirable – and arguably unnecessary – move for such an already accessible title, yet works wonders in highlighting just how well all of the parts fit together. For future games, there’s an even easier beginner’s variant and not just one, but two, harder difficulties, plus the welcome inclusion of randomiser cards that make it easy to randomly pick the spells and gem cards available. All of these elements wouldn’t have been missed if left out, but in their inclusion make the core box a very satisfying complete package.

Beyond the theme, the only mild disappointments are in component quality – the dials for Nameless and Gravehold, the town under attack, are loose and don’t sit flat on the table, but still do an effective job of tracking remaining life. The core cards are of decent finish and stock, but the square breach cards are thin and flimsy. Otherwise, it’s hard to knock what’s there for the price.
Aeon’s End takes components that might separately seem uninspiring and combines them into a tense and terrific experience. It’s easy to pick up, relatively fast to play and offers deeply satisfying gameplay options that will keep you coming back time and time again.

Aeon’s End escapes the shackles of its fantasy theme to offer a fantastic deckbuilding experience that thrives on its unique tweaks to the formula. Cards feel powerful to play, there’s loads of room for strategy and the Nameless are varied but balanced to maximise tension and satisfaction. It’s a wholly fulfilling time. 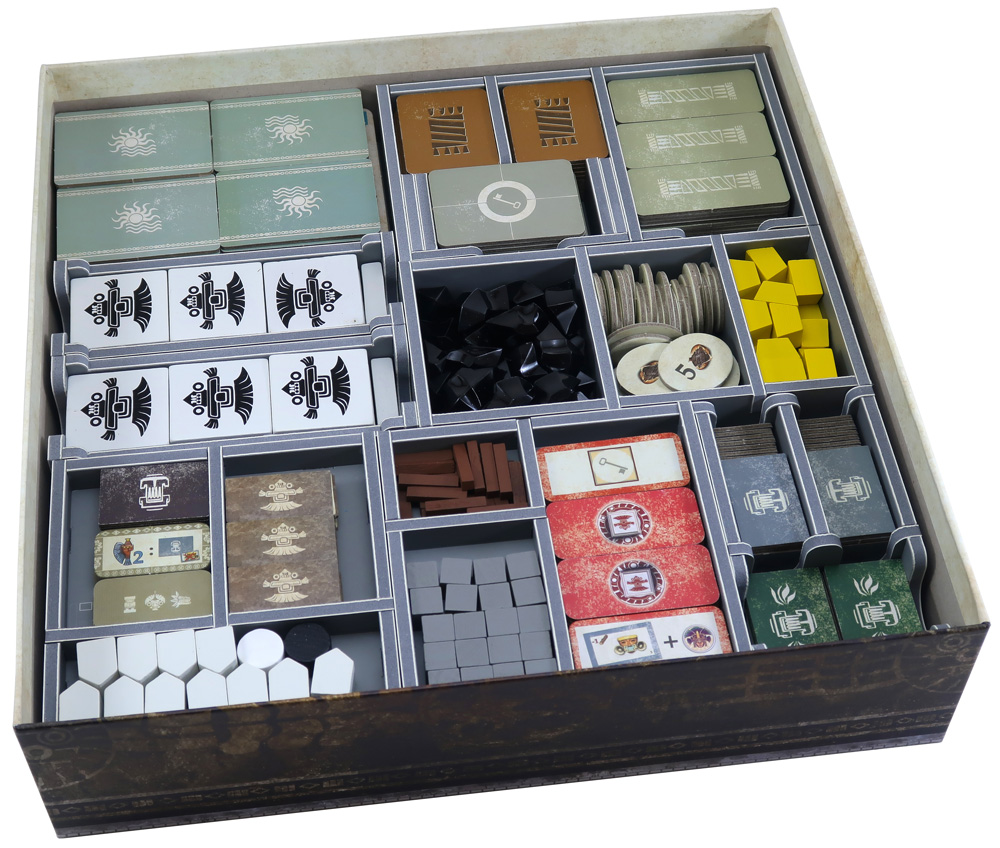