From its punctuation-packed name through to its wonderfully wacky World War II-but-Lovecraftian premise, everything about Achtung! Cthulhu feels like it was created as a bet, or possibly as a joke pitch that accidentally got the stamp of approval.

Once you get past the mundane weirdness of the core premise, however, and start delving into the juicy weirdness that comes from arming wizards with howitzers, you’ll find a gleefully ahistorical take on the gloomy Lovecraftian horror genre that works wonderfully. So long as you don’t think about it all that much, anyway.

This is actually the second edition of Achtung! Cthulhu to hit the shelves, with the biggest change coming in the form of a shift towards Modiphius’ own 2d20 system. This switch to a more action-oriented system is a much better fit for the game than its Call of Cthulhu and Savage Worlds-based predecessors, and allows it to truly forge its own identity.

And what an identity it is. 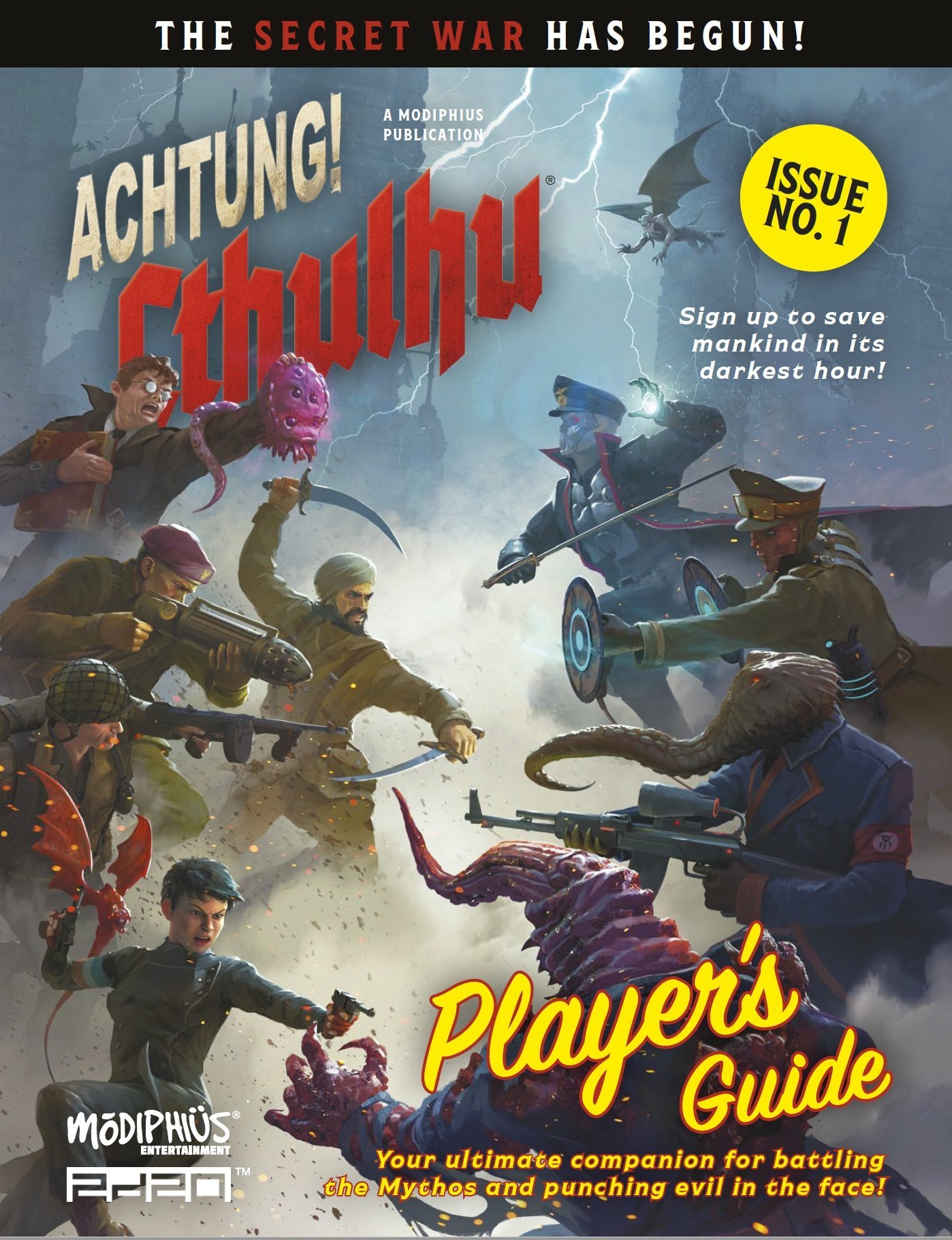 Honestly, Lovecraft-meets-Nazis barely even covers it. The game imagines its players as agents working for Allied and resistance forces in a secret war against abomination-worshipping fascists. In terms on tone, imagine the pulpiest, Call of Duty-est take on World War II you can think of, then blend it with the electro-punk magic found in Marvel’s own take on the war in Captain America, and then finally sprinkle it with choice titbits of the Cthulhu mythos. One adventure might see your team dropping behind the front lines to raid a Bavarian castle that swarms with the undead, while the next has them racing Nachtwölfe agents to recover a submarine claimed by be-tentacled Deep Ones.

The result is something that somehow manages to just about chug along and make a bizarre kind of sense. Yes, it’s wildly implausible if you actually think about it for more than half a second, but, in truth, the game needs a sheen of implausibility to act as a shield between it’s two-fisted, cigar-chomping heroics and the grim realities of the actual, factual Second World War. Every now and then its technicolour take on grim events verges on the brink of poor taste or downright insensitivity, and it sometimes seems that the game relies on constant explosions and super-lasers to keep the players from focussing on the muckier aspects of the real-world history they’re wading through.

This is where the relatively light and action-first gameplay of the 2d20 system comes to the fore. It’s a ruleset that lends itself to quick resolution, with a simple core mechanic based around players attempting to roll under a value determined by a mixture of raw stats and trained skills.

If you’ve played Star Trek Adventures, the recent Dune RPG or one of the many other Modiphius games based on the system, everything should be instantly familiar to you. The two elements that really make the game stand out from its brethren lie in its magic system and its focus on combat.

Magic in Achtung! Cthulhu isn’t anywhere near as dangerous for either body or soul as it is in most mainstream Lovecraftian mysteries, but the rules still give it a palpable aura of danger and power. Individual spells are powerful, but even the most basic of them are prone to failure, and if the roll goes badly enough the consequences can be dire.

Combat offers similarly dire possibilities, but at least here things are still very much presented in shades of heroic, comic-book action. Compared to typical fantasy and sci-fi RPGs it’s relatively easy for characters to take meaningful, long-term damage - either physical or mental - but in-fiction this only comes are several blasts with a machine-gun and an encounter with a fascist death-ray.

There are a plethora of options, both in terms of your characters and their gear, for shooting, stabbing and exploding the wide range of bad guys presented in The Gamesmaster’s Guide. Not every player needs to fiddle with the rulebook to drum up the optimal build, but if you do have some more rules-hungry folks at your table there’s plenty of nuance and theorycrafting for them to gobble up.

This all blends together to create a deeply pulpy, heavily action-focussed game that is just about silly enough to work. If you’re happy to embrace the boundlessly enthusiastic nature of the books and push the grim nature of the real world down to the bottom of your boots, it can provide hours and hours of horror-punching, laser-toting, Nazi-blasting nonsense.

A pile of pulpy nonsense, bound together with a Commando comic and an issue of Weird Tales.

TRY THIS IF YOU LIKED Pulp Cthulhu

If you got a kick out of tossing dynamite at a Shoggoth, just imagine calling in an airstrike on one. 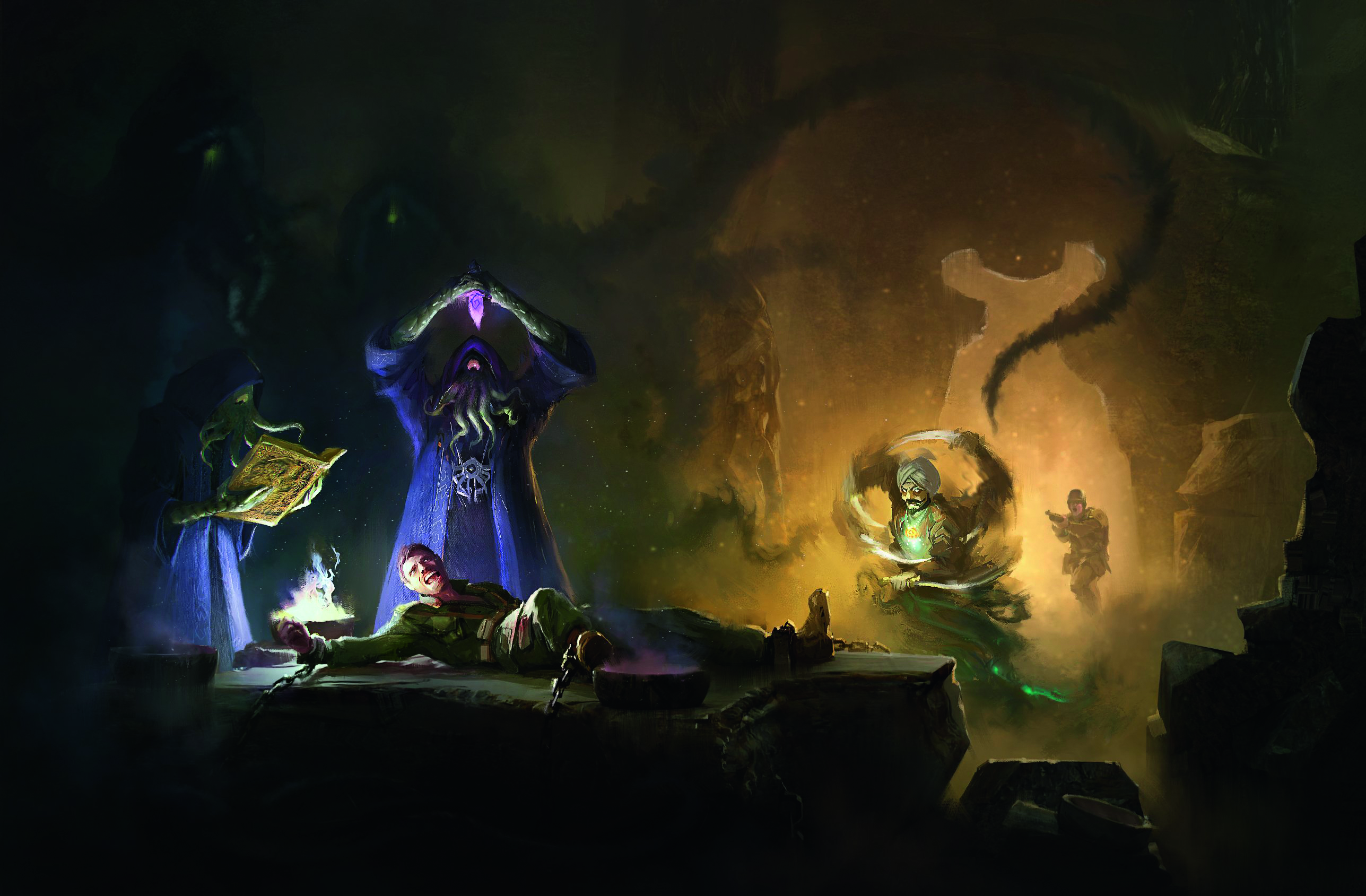 The price quoted above is for the Gamemaster’s Guide, but both the GM Guide and Player Guide were used for this review.