A Game of Cat & Mouth was the winner of the Tabletop Gaming 2021 Award for the "Best Party Game of 2021". You can watch the awards themselves below!

Tabletop Gaming Team also recorded a tournament of this game – for the glory of the Mars Bar! You can watch that by clicking here, or you can find the video at the bottom of this page.

Sometimes, it doesn’t feel like dexterity games get their due. It’s easy to take a look at a bumper board game box, and think that these are the great games. The ones you get your teeth into. The ones your shelves groan at the weight from. If you compare that to a physically light, dexterity game where you haven’t got to plan your move ten spaces in advance or read a rulebook longer than some novels, it rarely wins.

That’s a shame, because you have games like A Game of Cat and Mouth, that are just an utter delight. The game is handed to you almost like a psychedelic coloured briefcase, complete with handle, which is held perfectly closed by magnets. Upon opening, it falls into two sides, and you’ll need to insert a large plastic cat head (of course) that slots into the middle, acting as the divider, card pieces to insert to act as the bumpers, and a magnetic cat paw that sits on either side to become the flicker.

That of course, is the purpose of the game. Half pinball, half arcade basketball, and a dollop of air hockey. The cat paw is held in place by a strong magnet, but which you can use to teeter the paw into a perfect flicker. You’ll then flick the four yellow balls provided to hit the hard to reach nose out, send all of your balls to the other side, or try to knock out the teeth (white balls) of the cat in the centre. Knock all three to your opponent’s side, and you’ll win the turn, but they can try to flick them back through to your side, so you’ll need to be fast and accurate – easier said than done. 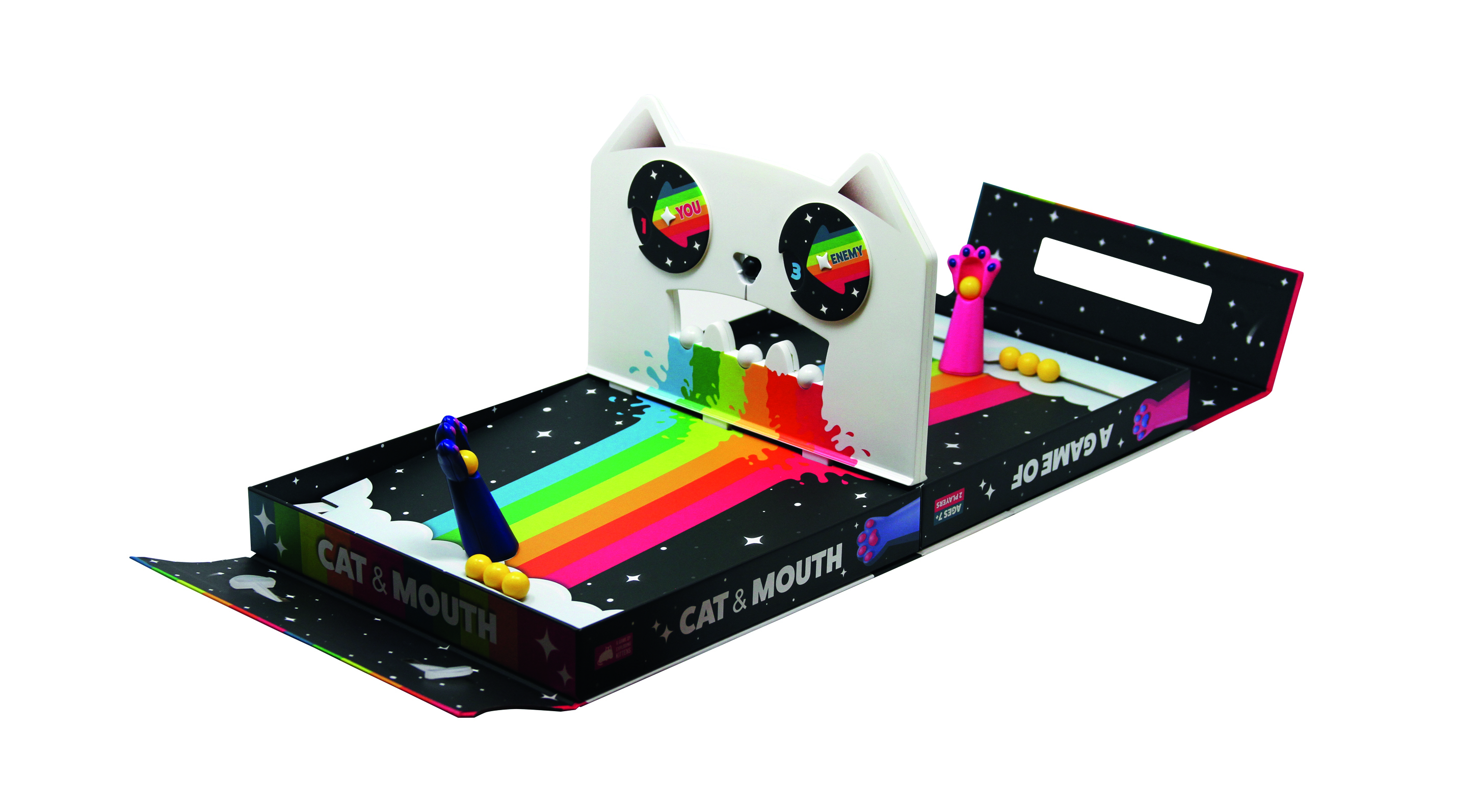 There’s a balance of skill and ultimately luck – though, with the frequency I lose, this may be the determination of a sore loser. This allows for a surprisingly balanced game however, and one in which achieving a winning streak is beyond satisfying. And whilst the game is limited to two players, they’ve thought of this – there’s a tournament builder available online. There’s even a Spotify playlist you can use, featuring hits such as Pinball Wizard and We Are the Champions. You’ll be grinning like a Cheshire cat.

For such a lightweight game, it packs a real punch, because it’s wholly addictive. Each time you take up the mantle of the cat paw, you’re obsessed with finding a new and better tactic to win. Do you spend time going for the nose? Do you steadily aim for the teeth? Or just try your best to aim every ball between the tiny gap and into the other players side for victory? The sheer enjoyment of such a simple game cannot be overstated. When you’re done, you just pull a few components out, and fold the game perfectly back up into its neat little case. There’s something pleasing about the contrast between epic battle to neat case within a minute.

The problem is, that as soon as it is packed away, it calls to you, presumably in tiny meows. Meows, translating into “I bet if you played again, you’d win this time”, and then a second Meow translating into “I’m so easy to set up”, and a third Meow of “just play the game!” 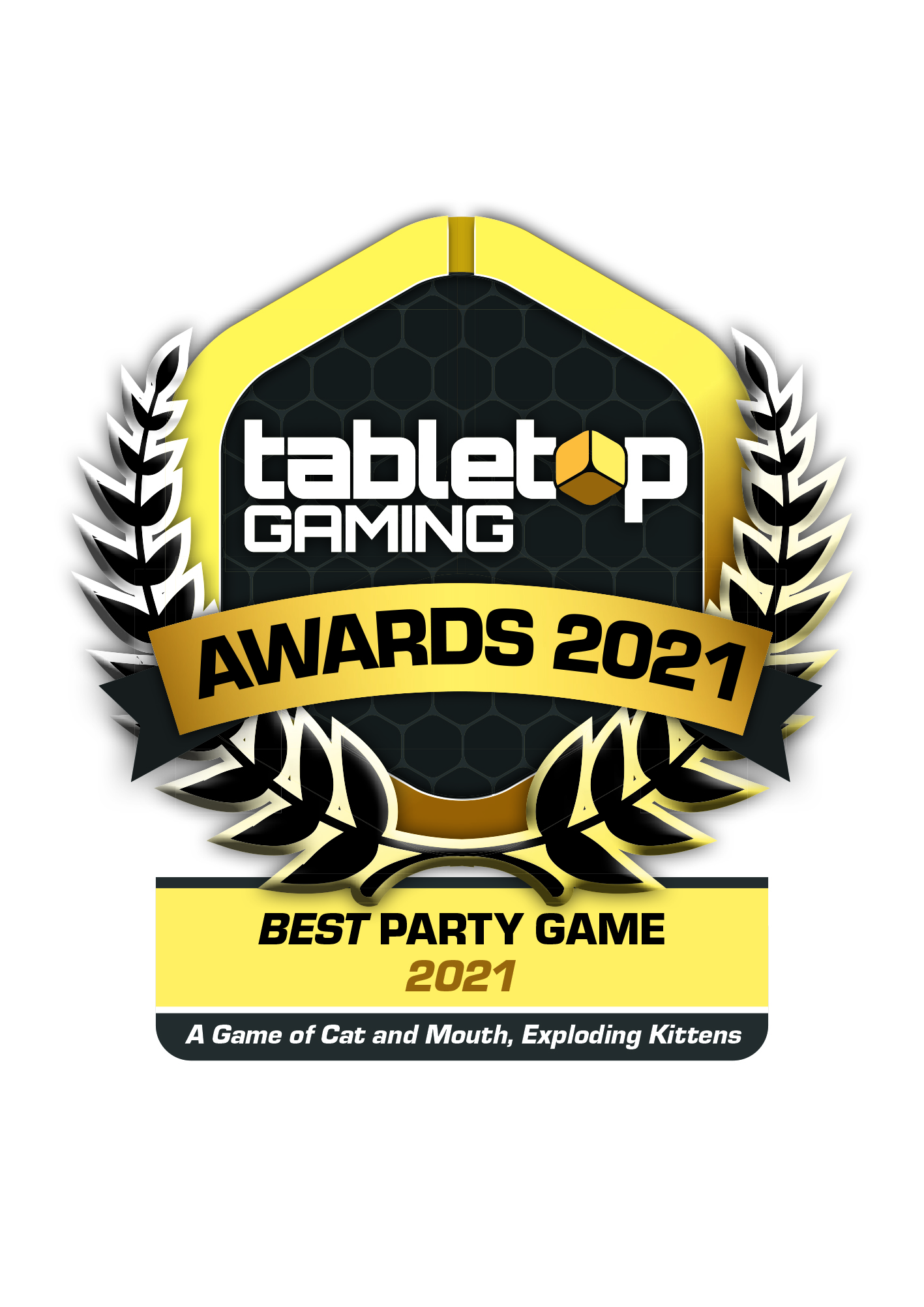 Try this if you liked… Exploding Kittens

It’s a different kind of game, but if you’re going to enjoy the humour of Exploding Kittens, you’ll harness the same for A Game of Cat and Mouth.

PLUS: We played this game as a tournament! Find out who was victorious by watching the below: