Sometimes a board game finds you just at the right time, and the new edition of 878 Vikings: Invasions of England could not have come at a more perfect moment. We seem to be living through a Viking revival and the era of the Viking invasion into England, in particular. The Vikings TV show covers the story of Ragnar Lodbrock and his sons as they try to conquer England, and recently released video game Assassin’s Creed: Valhalla picks up the later part of this story and re-tells the conflicts of ‘danes’ and English with added assassins. Even if you are unfamiliar with these particular franchises, there is also The Last Kingdom TV Show, Marvel’s Thor and later this year Loki and even Kratos from God of War the video game switched his native Greek god bashing to Norse shores. We truly are all Vikinged up.

This familiarity means that we come into this game with a level of investment (seasoned wargamers or history buffs, of course, would have these with several time periods and games, but Viking fever really levels the field here, even for those previously uninitiated). The men on the map suddenly feel less generic, we recognise the names of historical figures and battles. When a Viking leader falls in battle it feels more than just a simple gameplay set-back because you just lost Ivaar The Boneless, who set fear in all his enemies.

It also helps when the gameplay is good and here 878 Vikings does not disappoint either. It is an asymmetric wargame, in which two players can face each other as Vikings and Englishmen, or four players can fight it out as a team of two, each person taking charge of a separate faction in their respective sides. The Englishmen start as small clumps of armies spread around the map, and at first will inevitably be swamped by the Viking leaders who arrive on English coast with a terrifying force. However, while the Viking have an initial strength in numbers, the Anglo-Saxons have better reinforcement routes, growing their forces steadily as the game progresses.

Each faction also feels very distinct. On the Viking side, you have Berserkers, a deadly force that rushes into battle, but their fearlessness means they never retreat and are always first to fall on the Viking side. Norsemen are less aggressive and get opportunities to manoeuvre and regroup on the battlefield. English Thegns are numerous in numbers but are easily spooked, retreating from battles to fight another day, whereas Housecarls are better at standing their ground and dealing damage, although they are not as strong as Berserkers. The English also have a small advantage with a special third faction, the Fyrd. These freemen rally up to defend cities during Viking attacks and although they have the weakest dice of the lot, they are good at soaking up damage, allowing Thegns and Housecarls to attack.

A game of 878 Vikings will feel significantly different depending on which side you choose and as your game progresses you may find the roles reversing as well: where you started as an attacking force you may need to go on the defence and conserve your forces.

There are very few ways to affect the outcome of the dice rolls, so it is hard to pre-plan further than a couple of steps ahead. Turns are more reactionary, rather than a result of the carefully executed strategy. A small army with a lucky dice roll can make a significant dent in a much larger force. This complied with turn order that is random every round, can shift power dynamic almost every round. Whoever was winning one move ago, might be on the run the next but then winning again two turns later.

In the end, it all comes down to a mixture of luck and foresight. While some may find this daredevil-like gameplay a bit too unpredictable, you are unlikely to forget it anytime soon either. It is a great fit for the time period it re-imagines, mixing in just the right amount of the historical context. If you have not been hooked on Vikings yet, you will be after this.

With distinctive asymmetrical gameplay, 878 Vikings is a near-perfect re-imagining of the Viking invasion in England on the tabletop. Its reckless gameplay can be equally enjoyed by two players or two teams.

TRY THIS IF YOU LIKED 1754: CONQUEST – THE FRENCH AND INDIAN WAR

A predecessor to 878 Vikings, 1754: Conquest has a lot of the same elements, like team play and asymmetric set up. 878 Vikings ended perfecting and evolving them to become the game to play in the series. 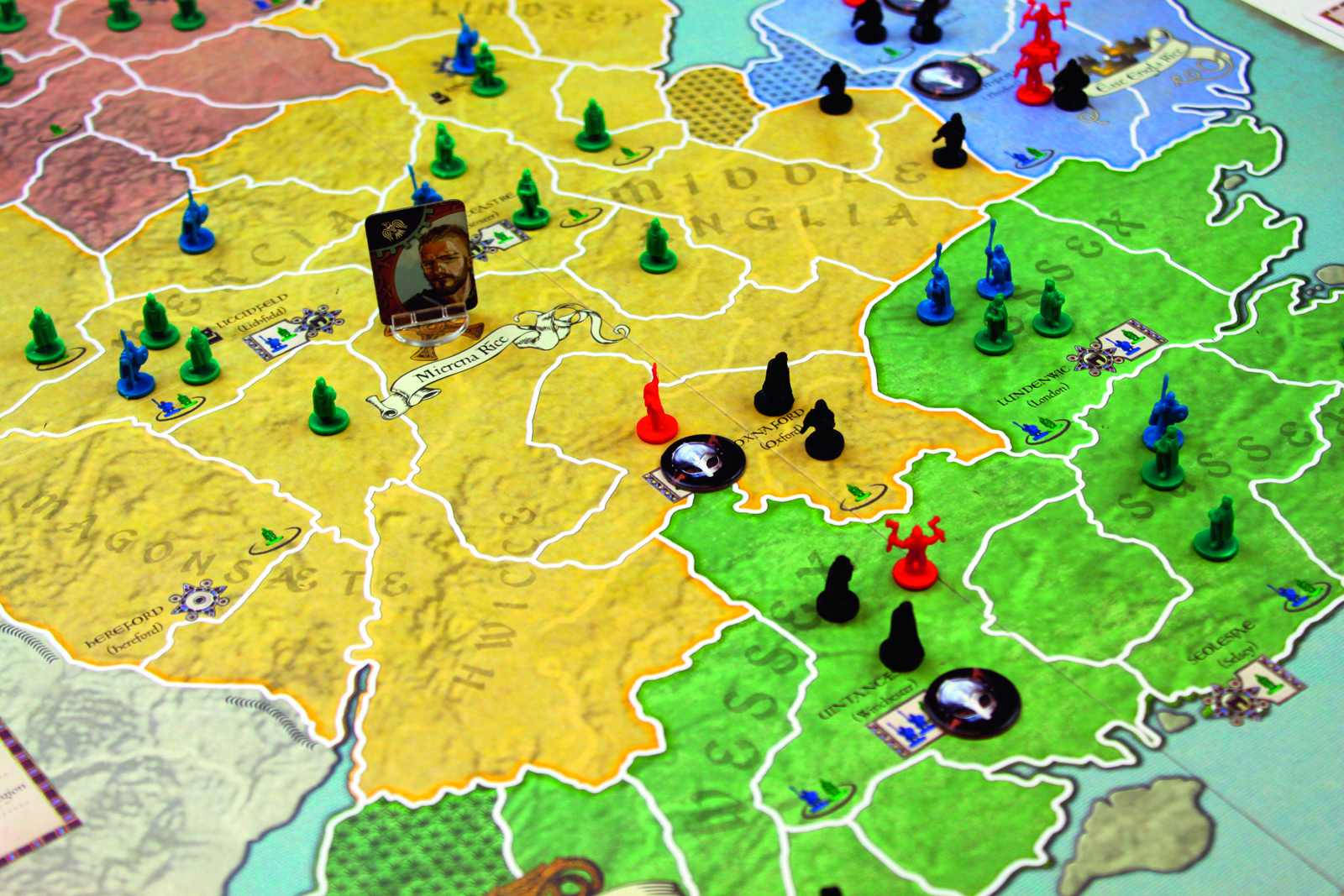