Since the huge success of Twilight Struggle in the early 2000s, card-driven wargame-Euro hybrids have enjoyed a steady rise in popularity. Buckets of dice, complex charts and cardboard chits have been replaced with plastic minis, card decks and lavish production standards. Opening up the world of historical combat to a whole new audience of gamers.

303 Squadron continues this tradition. It’s a scenario-based co-op for one-to-four players, set around an iconic group of largely Polish pilots who were instrumental in helping the Allies win the Battle of Britain. And it looks brilliant. The pilot and event cards, as well as scenarios, give accurate historical flavour to each play. While the included compendium gives details of all the RAF pilots, alongside information on all the planes and events on show.

Each player takes the role of a 303 Squadron pilot, flying a Hawker Hurricane. You’ll usually be up against 10 or more German aircraft and will have around eight turns of combat to meet your objective. Goals vary from stopping bombing raids on cities or fleets, to simply getting home in one piece. But all will include intense dogfights. So far, so war game. 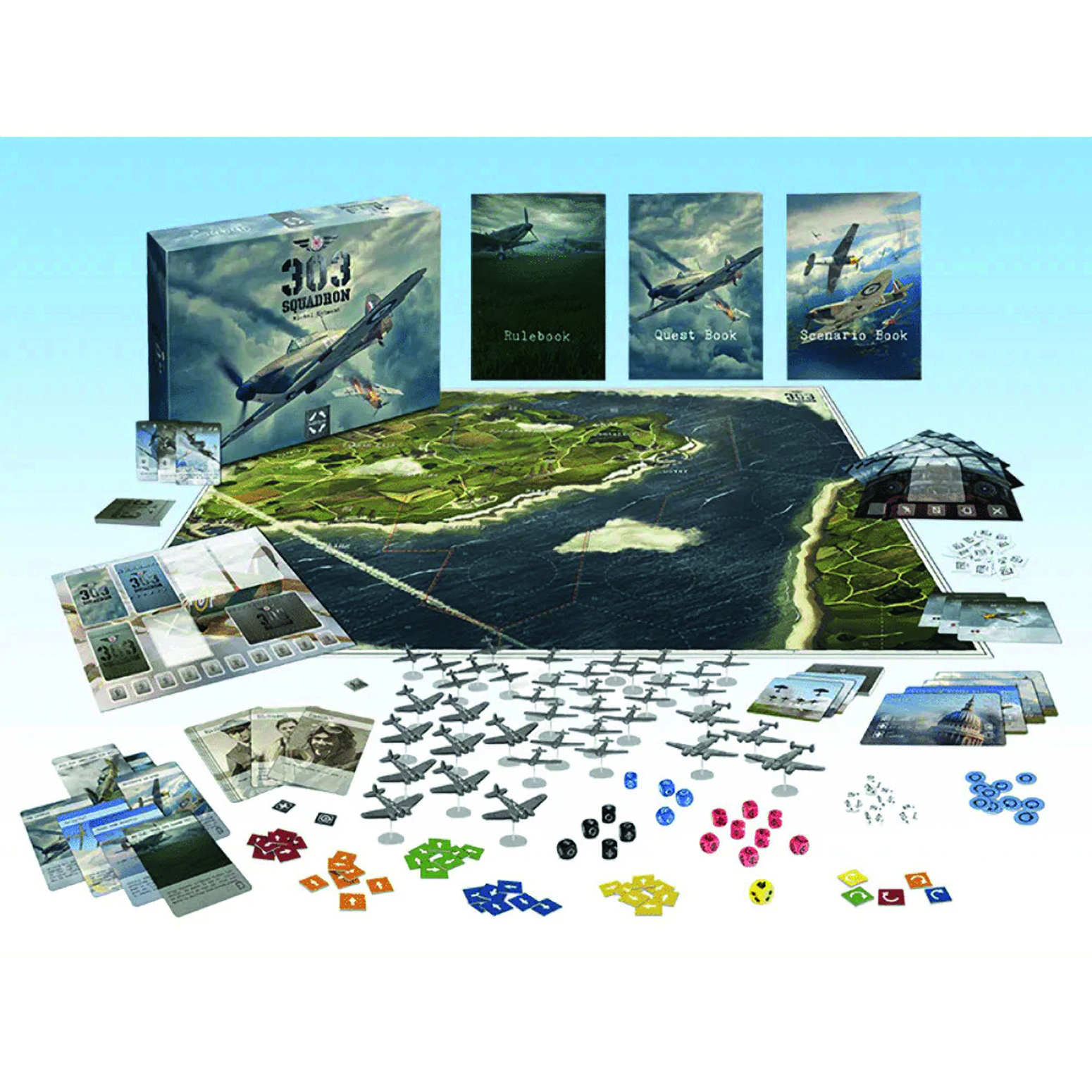 The card combat system is where the game really shines. Players roll custom dice which usually include hit, evasion, manoeuvre and blank sides. A player always rolls two dice, while the enemy’s dice pool depends on both number and types of German aircraft in your space. Once you know your results, you can manipulate the outcome by playing cards. These give you an extra result (hit, evade etc) but also an ability. For example, you may get an extra hit for each manoeuvre result you rolled.

If you’re still struggling to meet your objective, other pilots in your space can chip in a card of their own. This is again symbol-based, but you’re completing a set of three symbols (on a separate section of the cards) to get an additional result – perhaps the last point of damage you need to take a bomber down.

Each Allied pilot has limited ammo, which ticks down after each round. Worse still, the ammo limit affects your hand size for the all-important action cards. While any damage you can’t avoid will take out crucial systems – further reducing hand-size, limiting movement or forcing you to discard cards.  This does a great job of injecting tension into the dogfights, making you think about every decision.

But the reliance on this clever card-dice mechanism for the gameplay also causes its problems. Firstly, it lacks the realism most people look for in a war game. Having a dogfight game where both speed and altitude are ignored is not only unrealistic, but begs the question – why is this an aircraft game? It may as well be tanks, or orcs, or whatever. Especially as, if you run out of ammo or crash, you can land and reload – or just come back as someone else altogether.

All this also presumes you can work out what to do in the first place. I’ve read a lot of terrible rulebooks – including many for prototypes. And I’m sorry to say 303 Squadron’s is one of the worst I’ve experienced. It looks very pretty. But the order in which it has been laid out makes little sense, while some of the mechanisms are impossible to understand. It took me finding several videos and reading a laundry list of rules Q&As to get going, which simply isn’t good enough.

Once you do get up and running, and beat the simple training scenario, the base game has just five more scenarios. Each has its little historical wrinkles, but they’re all eight-round co-op dogfights. Rather cynically, the back page of the compendium is an ad for two expansions I can’t help feeling should’ve been thrown in here. Which makes this feel all the more like a real opportunity missed, as the clever combat mechanism seems worthy of a much more ambitious project. I could really see it working long-term, perhaps as a one-versus-one LCG system. But as a co-op mechanism bolted onto an ill-fitting theme, I fear it has very limited appeal.

Buy a copy for yourself here

Try this if you liked D-DAY DICE

If you’re looking for a step-up in complexity and scale from a light war game such as D-Day Dice.