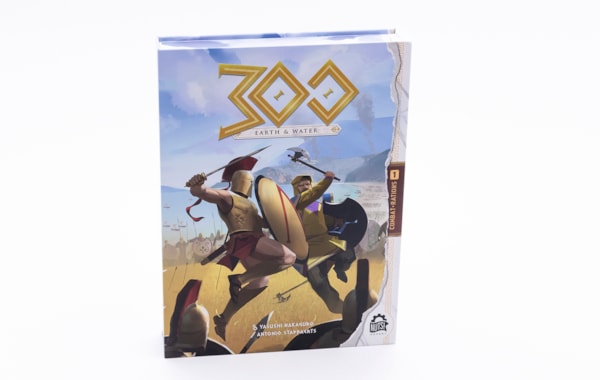 No Snyder to cut from this one

Prefer to watch or listen to your reviews? Find this review on YouTube in the below link:

The battle of Thermopylae (or, ‘the one from the film 300’, successful sequel to the battle of Marathon of chocolate bar fame) has been extensively mined for tabletop gaming. This outing is a tight war-on-a-board affair that mixes the best bits of light wargaming with the strategic sweeps of a good old ruckus. Plus you’ll even get to throw quite a lot of dice, which is the guilty pleasure of this kind of game.

One player takes control of the Spartans with superior military strength, but not the numbers. The other player gets the Persians, attempting to swarm across the Mediterranean and outnumber the Greeks to a point of submission. Each side gets a number of points to spend on their turn (more for the Persians, less for the Greeks, you get the idea), and these are spent buying land and sea forces, drawing cards, and in the case of the Persian’s creating a pontoon bridge to cross by land. Players take turns either playing the event on the card (sometimes marking off a leader on the board for one use cards) or moving their armies – the latter which can be done by moving an army as far as they like through areas under their control to an empty or enemy city.

Which is when the fighting starts. You roll up to three dice for each unit in the city, the highest roll wins and a single unit is removed from the other side. Persians, except in special circumstances such as when a card event is played, can only roll as high as four compared to the possible six of the Greeks. This makes the sense of attrition as the Persians hit various Greek meat grinders, and the rounds and rounds of rolling have to be contended with, feel very real. In this respect, it sometimes feels a little bit like a straight-up light dice game when a huge Persian army hits a roadblock. For a few readers the, sometimes excessive, dice rolling might be a downside, but it’s genuinely dramatic to turn the tide from a strong Spartan garrison down to a single unit (which may still be able to hold out against the Persians).

The event cards are downright mischievous too – for example, a Persian card which allows three new units to appear when a Persian army loses a battle makes for amusing plays, or the bonus attack at the start of battle for the Greeks makes for jolly ‘gotchas’. The card play uses the ‘take turns playing cards until both players pass’ mechanic, which allows for tactical responses in the moment.

Of course, winning the game isn’t just about overrunning the enemy. At the end of each of the five turns all non-home cities are worth a point, with the difference added to the swinging victory points tracker. If you can keep your supply lines open (you need to feed everyone left after the bloodshed) and stave off enough enemy attacks, there’s a slim chance you can throttle them out of advancing. That’s if they don’t mount a wild naval attack and break your supply line closer to home, making all of your armies topple.

It’s rare for us to bump into a wargame that fits on extremely small tables and in boxes that could be mistaken for a (special edition) DVD case, and 300 packs a huge amount of war into that tiny space.

Big war, little box. Occasionally dramatic, sometimes a little bit silly, and all done in 30 minutes – what’s not to love?

If the head to head of The King Is Dead brings out the worst in you, then 300: Earth & Water is the perfect next stop on sort-of-wargame march onwards.