Great news for many of us, with a worldwide release confirmation of Digimon Trading Card Game!

For the uninitiated, it's a competitive trading card game where you'll be trying to evolve and gain strength in your Digimon, in order to beat your opponent's security. At zero, it's a knockout, and you win!

Of course, you'll need cards in order to play, and finally, you can pick these up more locally. These will be available for release in January 2021, or as part of a Super-Pre Sale at the end of November 2020. This will be available in selected stores, with more detail coming on their official Facebook page. We do know however, it'll include the Digimon Card Game Release Special Booster V.1, and Digimon Card Game Starter Deck including Gaia Red, Cocytus Blue, and Heavens Yellow.

For new starters to Digimon, and to the game alike, they're offering starter sets, as well as a promise of (with a release date of 'soon') a new app to help you learn to play, though of course there'll be an official rule book.

Those starter sets will come with the selection of card types as follows: Common: 7 types, Uncommon: 5 types, Rare: 3 types, Super Rare: 1 type, as well as 2 memory gauges and 1 booster pack. These are the same starters as can be picked up in Japan, though contain a booster pack unlike their Japanese counterparts, which will help really build your deck up quickly! Prices are in USD at $9.99, so we can expect something similar in the cost conversion for our local UK stores.

There'll be more information announced nearer the time, but for now, keep an eye out for new announcements and we'll count down to enjoying it 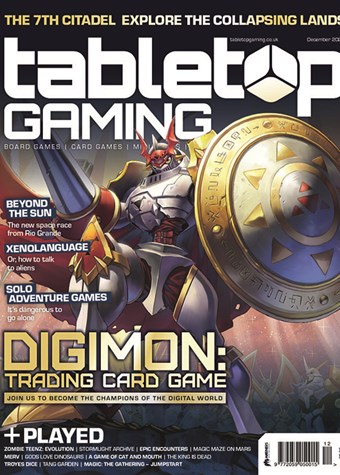 UPDATE: You'll find a feature and interview with the Japanese designers of Digimon in Issue 49 of Tabletop Gaming Magazine, available in print and digitally, with a top ten cards provided by Ross 'Wossy' Gilbert.

We also have 6 FREE Digimon promo cards on the cover of issue 52. Buy you copy now, while stocks last.