Wolfenstein The Board Game Comes to Kickstarter You can never tire of fighting Nazi's

We’ve got Resident Evil, Dark Souls, and now Wolfenstein is making its mark with a board game, as Archon Studio launches this dungeon crawler game.

If you’re unfamiliar with Wolfenstein, it’s set in an alternate world where the Nazi’s won WW2 and the Reich reigns supreme. An ageing Hitler has retreated Castle Wolfenstein with instructions to his research team to extend his life through mechanics. The goal, is to assemble a team to find and assassinate Adolf Hitler himself, causing mayhem along the way.

The game itself will be 1-4 players and a dungeon crawler. You’ll need to keep moving, but you can investigate side quests, or battle additional enemies for extra loot, as you go. It’s a cooperative game – the team you assemble as players will help you to defeat the enemies and complete the mission. The pledge options also include additional expansions, including ‘The Old Blood’, one of which is a Kickstarter Exclusive, as well as an option for the 3D terrain kit to really bring Castle Wolfenstein to life.

Paper components will be manufactured by Ningbo Eastar Company, who also did Tainted Grail, and Nemesis, so we’re expecting high quality. For models, it’ll be using HIPS plastic, using the same method used by Games Workshop. It’s also boasting 400 hours of gameplay testing – straight out of the gates, this feels like a game aiming for great things. 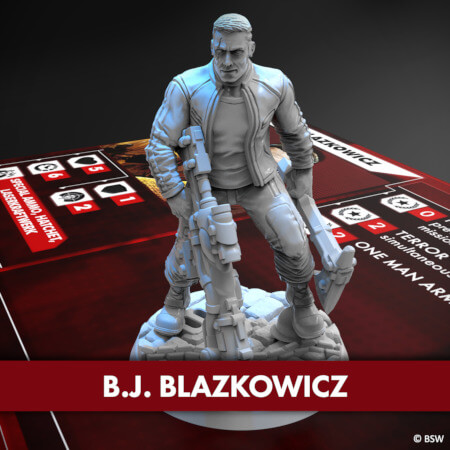 The Kickstarter detail certainly suggests this will be a favourite with fans of the game, and it also boasts approval (beta so far) with Bethesda, who have been responsible for the more recent Wolfenstein video games.  However on its own, it is certainly intriguing to even those unfamiliar with the franchise.

The Kickstarter launched 14 April 2020, and has already been fully funded – in fact, it’s approaching 10x its initial goal of £40,103, and still has 12 days to go. If you’re wanting to join the fight, check out their Kickstarter here.