And it looks gorgeous

The game will be designed wife and husband duo Clarissa Wilson and James A. Wilson, who you may recognise as the designer of the incredibly popular game Everdell. The game is separate to Everdell (however you can always imagine those from Everdell are hiding in the garden of Flourish).

Inspired by enjoyment of Sushi Go and 7 Wonders, its designers asked themselves if you could keep the cards and only pass one, instead of playing one and passing them all. This became the foundation of Flourish, as an inverse of traditional card drafting games.

The game is designed to be quick to learn, but with a depth that pulls players back to the game, but again using heavy theming of gardening. The artwork is colourful and eyecatching. You'll be trying to obtain medals throughout, and a solo mode is also included, which will take around 15 minutes to play (meaning you can play again!), and is for between 1-7 players. There are also two expansions created that will be included within the Signature Edition, which will be the first to be released. 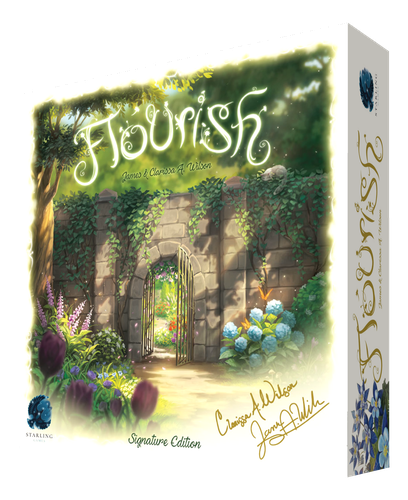 Starling Games have said they are cautious with providing a date for release given the current situation ), however, of the Signature Edition, they're hoping for a Fall update, with more confirmation around Speil Digital. When asked on a forum if the game will be funded through Kickstarter, designer James A. Wilson said "release details are still being determined", and Dan Yarrington of Tabletop Tycoon said "things are a bit up in the air due to the pandemic effects", however, directed interested parties to the newsletter option to gain more details as they become available.

Given the success of Everdell, this looks to have great promise, and we'll be keeping an eye on Starling Games for this one!