Soviets and Greeks get new releases from Great Escape Games Soviets and Greeks get new releases from Great Escape Games

In Soviet Russia, gun shoot you! And your family… and your friends… and anyone else the wielder considers a counter-revolutionary element.

Great Escape Games have recently released some 28mm Stalingrad veterans in winter uniforms. The first lineup of releases are a platoon, a squad (two squads in fact, each with different poses), a command squad of three models and several different Anti-tank guns.

The veterans are armed with a mixture of weaponry – the PPSH-41 submachine gun (also known as the ‘pah-pah-sha’, DP-28 light machine guns and Mosin-Nagant Model 1891, the standard issue weapon of Soviet troops throughout World War Two. The models are wearing M1940 helmets and the sport M1935 greatcoats.

Considered by many historians the crucial battle of World War Two, the Battle of Stalingrad lasted from 23 August 1942 – 2 February 1943 and resulted in roughly two million soldiers dead, wounded or captured. One of the harshest battles in history, the Germans suffered heavy losses when the campaign dragged into the harsh Russian winter. The Soviets, whose equipment was generally of an inferior quality to that of the Germans, were nonetheless more prepared for the cold, as evidenced by the uniforms of these models.

Also in the lineup are a squad of Soviet Assault Engineers and Soviet Veteran Scouts. The Engineers are dressed in body armour and have a flamethrower amongst their ranks, whilst the lighter armoured scout figures wear MKK (makirovochnyi kamuflirovannyi kostium) pattern camouflage outfits, whose pattern design was commonly known as the ‘amoeba’ pattern. As well as wielding Russian weaponry, several figures also carry captured German MP40 submachine guns.

The other release is for a two-man sniper team of Greek mountain infantry for the Greco-Italian War, that raged from 28 October 1940 to 23 April 1941. 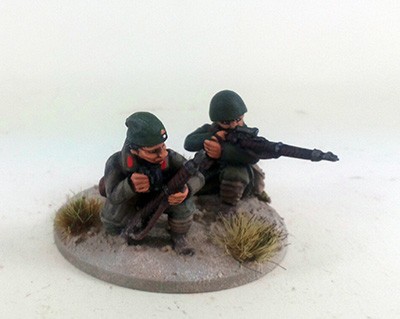