Pop Days of Wonder, and Blizzard Entertainment into a shaker, give it a good shake, and out pops Small World of Warcraft.

Originally quietly announced and played at BlizzCon 2019, Days of Wonder has now dropped a trailer its newest game, Small World of Warcraft. From the name, you can tell it's based on its Small World games, but you'll see it's set in the world of Azeroth, part of the World of Warcraft Universe. An exciting, if a little surprising collaboration, with what appears to be a great looking game.

Small World of Warcraft is game for 2-5 players, set in Azeroth and suitable for ages over 10. Gameplay will take between 40 and 80 minutes, in which you’ll seek to claim several islands in the hostile worlds, defeat your neighbours, seek to occupy legendary places and control powerful artefacts, to reach new levels of dominations.

From their description: “A new day dawns on Azeroth. A day like every one before it, and every one after. A day of merciless struggle for the control of the World of Warcraft. Not only is this Small World territory far too tight for everyone, it also hosts the never-ending conflict between the factions of the Alliance and the Horde. Dawn has broken and the time has come to take your place on the front lines.”

You’ll vie for control of Azeroth by choosing combinations of special powers, and artefacts with races unique to the Warcraft universe, such as Portal Mage Pandarens or Herbalist Goblins. You’ll seek legendary terrains and set up a new empire to lead and rule. 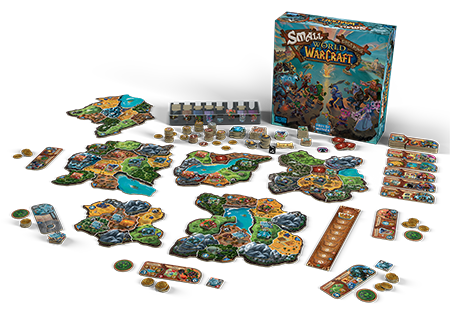 In their announcement, Days of Wonder advised working closely with Blizzard to seamlessly bring together the two universes. There’s new and exclusive artwork, alongside the familiar races and powers for World of Warcraft players. Designer Philippe Keyaerts said, “it was all about intimately mixing the spirit of Small World with the Warcraft universe, so that both worlds reflect on each other.”

It’s due to release in summer of 2020, which is fast approaching, but you can check out the full details of Small World of Warcraft on their site.