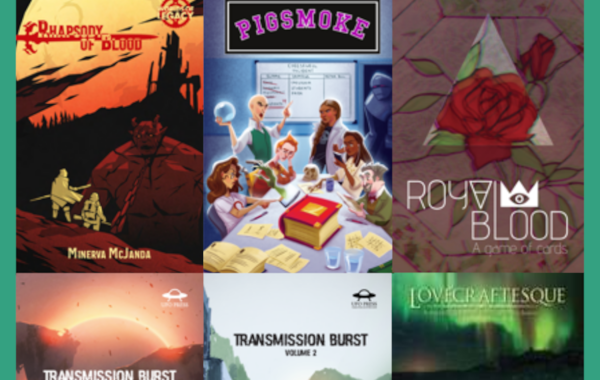 The UK Indie RPG League are a self-confessed small group of indie tabletop roleplaying game publishers, made up of Rowan, Rook, and Decard, UFO Press, Certain Death Publishing, and Black Armada. This league, however, has now launched a bundle of products with the profits being donated directly to the NHS through Crowdfunder to provide personal protective equipment.

The bundle itself is made up of six RPG’s, with a value of $64.60, which you can purchase for $16.15. From this, you will gain Royal Blood, Pigsmoke, Legacy: Rhapsody of Blood (Worlds of Legacy 4), Lovecraftesque, and Transmission Burst Volumes 1 & 2.

This means that “For a knock-down price you get cosmic horror, wizard academics, Tarot-based heists, generational fantasy, and two dozen microgames which cover so many possibilities I don't even know them all -- and you can funnel resources towards the medical professionals working to protect this country from COVID-19.”

It’s fair to say that it’s a range of games available. Royal Blood sees you as a royal, half-magic, half-human, where you’ll be seeking to take the power of the Arcane, reality-bending monsters who wear human skin like a suit. It’s a heist RPG, where you’ll need a deck of tarot cards and a handful of coins. In comparison, Transmission Burst sees Bio-Engineered commandoes raiding a monastery of machine-monks in a mixture of games suiting dice played, dice-less, and card-based games, as well as single group, or pair played games too.

The fundraising for which this is for hasn’t yet reached its target, so this is a great way to chip in, and also get a bargain. The bundle is only available for a limited time, so you’ll need to be quick to get involved!