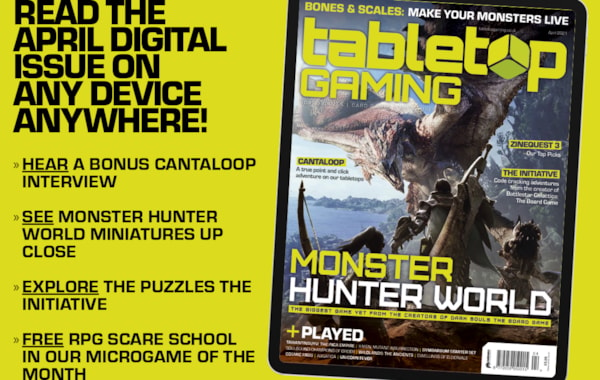 The hunt is on, and this time it’s for huge monsters in Steamforged latest massive miniatures game, Monster Hunter World.

We take an exclusive look at the miniatures from the game in our in-depth interview and even get a top five monsters from the designers.

Plus we get the scoop on Unexpected Games’ first game, The Initiative. The new studio from Battlestar Galactica designer Corey Konieczka offers us a thrilling spy game of code cracking unlike any other.

What’s in the issue:
•    Monster Hunter World: The Board Game – We get up close to the biggest monsters ever made by Steamforged, and this is the publisher responsible for Dark Souls: The Board Game,  Horizon: Zero Dawn and Devil May Cry. Plus, never before seen photography of the miniatures.
•    The Initiative – Corey Konieczka’s first game at his new Unexpected Games looks to be a ground breaking code-cracking spy kids thriller.
•    Cantaloop – a true love letter to point and click adventures, now on your tabletop. It’s noy often a game starts off by asking you to break into prison. We get scoop on this game ten years in the making.
•    Zinequest 3 – we get hyped about some of our favourite projects from the recent Kickstarter Zinequest event. We think these little RPGs
•    Studio Profile: Brotherwise Games – Can you hear the call to adventure? Find out how these brothers became their own boss monsters.
•    Painting Guide – Bone and Scales. In this technique guide, using Wargame Atlantic miniatures, Andy Leighton gives you some tips to brush up on that can be applied nearly anywhere.
•    29 Games Reviewed and rated – get the verdict on 29 games including Dwellings of Eldervale, Aquatica, Cantaloop, Wildlands: The Ancients, Soulbound: Champions of Order, X-Men Mutant Insurrection, Cosmic Frog, Era: Medieval, Smash Up: Marvel, Nomids, and many more!

Don’t want to miss the next issue?