Magic: The Gathering turns a quarter of a century old this year and, to mark the milestone, Wizards of the Coast is putting out a special set later this month that celebrates the entire history of the iconic collectible card game. We’ve got an exclusive look at one of its cards.

Masters 25 brings together cards from every single black-bordered Magic set ever made, making it a fun way for long-time fans to get nostalgic over classic creatures, spells and planeswalkers, and newer players to see some of what they might have missed over the years.

The set isn’t focused on a single play format – it’s more a greatest hits of Magic cards with particular importance or popularity in the community, with their usage spanning from Limited and Modern to Commander and Vintage.

The roster includes at least one card previously banned from tournament play, with one of the game’s most powerful planeswalkers of all time, Jace, the Mind Sculptor, making a return in Masters 25 after his return to legal play. However, lands and cards still on the reserved list won’t be found in any of the packs, which will each contain a foil card.

Although it won’t specialise in just one style of play, Masters 25 is built around two keywords, Morph and Cycling, which have previously appeared in past Magic sets. Morph allows a card to be played facedown as a generic 2/2 creature at a cost of three generic mana, before being transformed and turned face-up by paying its morph cost, potentially triggering effects and enabling more abilities. Cycling, meanwhile, means that a card can be discarded – at a cost – from a player’s hand, with potential effects, before letting them draw a new card.

Want to see more? Well, you’re in luck. We’ve got an exclusive first look at one of the cards from Magic’s history making a return in Masters 25, due out on March 16th.

Luminarch Ascension was originally printed in the 2009 Zendikar set, and is one of a cycle of Ascension cards in the collection, which grant beneficial effects when enough quarter counters have been earned by completing their given objective.

In the case of Luminarch Ascension, quest counters are obtained by taking no life damage during an opponent’s turn. Once the card has four or more counters on it, its player can then create a 4/4 white Angel creature with Flying for the cost of one white and one generic mana.

When it made its debut in Zendikar, Luminarch Ascension was often used as a finisher by players using white-blue control decks, as well as making a common appearance in so-called ‘Turbo Fog’ decks, which were built around the use of the ‘fog’ effect (which prevents combat damage) and forced an opponent to lose by making them run out of cards in their deck – also known as ‘decking’.

Luminarch Ascension also played an important role in Magic’s tournament scene when in 2011 top-eight player Naoki Nakada used the maximum four copies of the card during Paris’ Pro Tour as part of his sideboard – a group of cards that competitors can use to tweak their main deck between games of a match against a single opponent. Fellow top-eighter Vincent Lemoine similarly kept three copies of the card in his sideboard during the same tournament.

Get your first look at the card below. 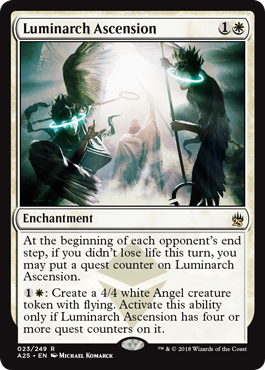