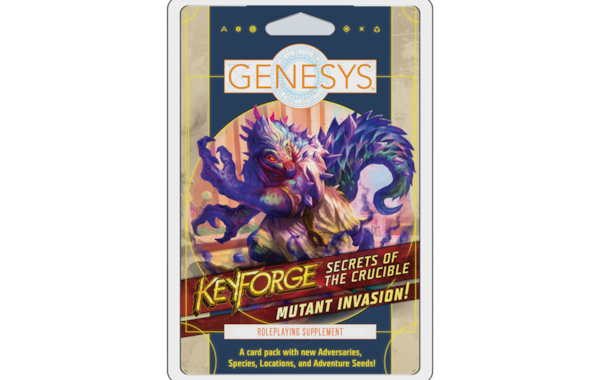 In order to keep up with the ever changing card game, the Keyforge RPG has mutated.

What better source for RPG content than a card game that has over 104 septillion deck combinations (thanks Wikipedia!) and what better RPG to run it in than one that is designed to empower GMs to tell any story? That’s right, Keyforge is getting a supplement for the Genesys system. Well, another one, sort of like a supplementary supplement.

Fantasy Flight recently announced Secrets of the Crucible, a Keyforge setting filled with tools on generating NPCs, modular adventures like those found in the Android: Shadow of the Beanstalk, as well as character classes, races, items and Æmber skills. The sourcebook, which is due out in Q2 2020, looks to have everything players will need to explore The Crucible and discover its secrets.

However, with the even more recent Keyforge Mass Mutation dramatically changing The Crucible, Fantasy Flight have put together a helpful supplement filled with new mutated NPCs, locations, adversaries, and adventure modules all on ‘oversized cards’. Most importantly however is that this new Mutant Invasion! supplement adds in rules and advice for incorporating the newly released dark æmber into your campaigns.

We’re not quite sure how they’re managing to fit all this in unless these oversized cards are the size of lottery cheques but Mutant Invasion! also has a new playable species called the proximan. An alien species who have “a symmetrical, largely humanoid appearance, and evolved neuro-accelerant glands within their twin cranial protrusions, allowing proximans to quickly process sensory information and determine the best way to react when prey or deadlier predators are detected.”

Personally though, we’re a little gutted that they haven’t found a way to generate each copy to provide slightly different classes and species to completely throw off our resident power gamer.

Secrets of the Crucible and Mutant Invasion! are both due out in Q2 2020 and SotC is available for pre-order on the Fantasy Flight website here.