Eight Board Games For Christmas Games for everyone this Christmas

Playing board games with the family at Christmas doesn’t have to end in an argument about who was the best cheater at Monopoly. Instead, pick up one (or more) of these games from the more interesting side of the tabletop hobby, and your Christmas day might be saved.

Or indeed, turn into an argument about Codenames instead, which is still a lot better.

Join Chris and Charlie as they explore some of the best games for kids and adults this Christmas. If you like what we do, subscribe to the magazine.

You can buy the games included in our Christmas family board game list using the links below (from which we’ll make a small amount of money from). 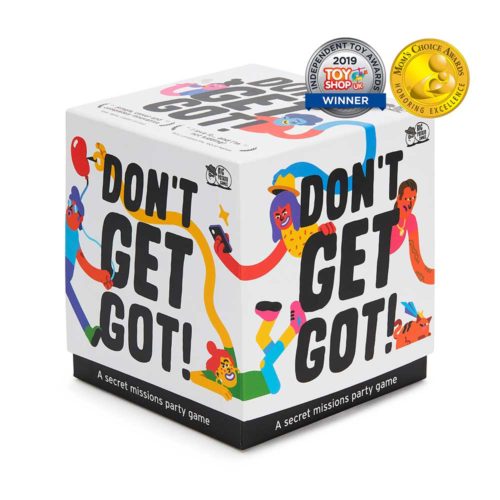 What is Don’t Get Got?

This is an ongoing game, so you can start it in the morning and play it through to the evening, even whilst playing other games! You’ll have six secret missions to complete, to trick other players into completing your task for you but without getting caught. You’ll need to get to three completed in order to win, but it’s not as easy as it sounds! For example, you may be asked to ‘“Hide this card inside a jar and get a player to open it”, or to “get a player to admit to a crime”, “Make something and get a player to wear it”

Christmas is a long day, and this is a way to bring it all together. You can start this in the morning, and keep your tasks squirrelled away in your head all the way through. It’s like ‘the game’ (you lost), but with a little more purpose. Your player count is only limited by the sleeves available too, so there’s a chance for more to play, or to play in teams! Great fun for families to play, and runs alongside other games too.

In fact, Big Potato Games could easily make this list a few times – from Obama Llama (where those who struggle to connect the references or be particularly quick can read the starting sentences, keeping everyone included), to Herd Mentality which is all about thinking exactly the same thing, to something like Bucket of Doom, which is linking two things together with a fabulous story – though, adult discretion for that one is advised (as we found out!).

Plus Gruffalo and Frozen Flavours 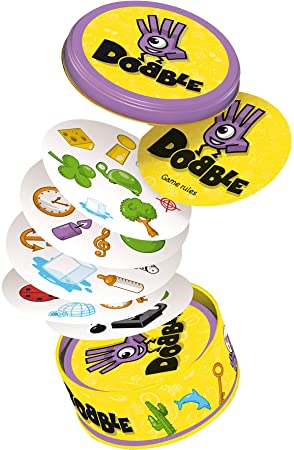 Dobble is a quick and easy game to pick up, and is simply matching to begin with – you’ll try to get rid of your hand by calling out matches and placing your card, where you or another player will then try to find a new match.

This is a really family friendly game – from 6 to 100, you can play the base game within minutes of teaching, and there’s no knowledge or wisdom barrier for the children to overcome – ie, sometimes adults are better strategists, making the experience frustrating for children. With that, there’s mini games too, so you’ll have different ways to play that suit whoever your playing with – if some are slower with placing cards for instance, some of the mini games cover this. Plus, there are a ton of different variations of Dobble, so from Dobble Gruffalo to Dobble Frozen, there’s something that’ll attract the attention of all the family. 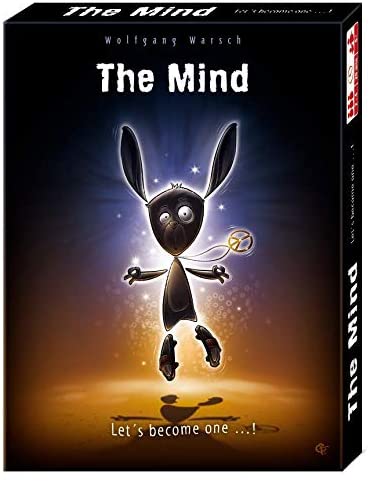 This is part game, part experiment – and absolutely quiet. If your Christmas day is totally hectic, this might be a moment to take some quiet time, stare into your fellow players eyes, and communicate telepathically instead. In the Mind, every player gets a hand of cards from a deck labelled 1-100. You play these cards each round, playing your lowest card – and using that telepathy to ensure no one else holds a card lower. You’ll go through levels with more and more cards, and can even choose to have it that all cards are played face down.

This is a game where you have to focus on what you’re doing, but there’s no real logic to it. People can’t necessarily be better than others, as it does rely on an amount of luck, that means there’s no barrier to entry. The game will force you to slow down on a hectic day, and maybe find out which of your relatives are on your wavelength too.

Plus Disney and Marvel Flavours 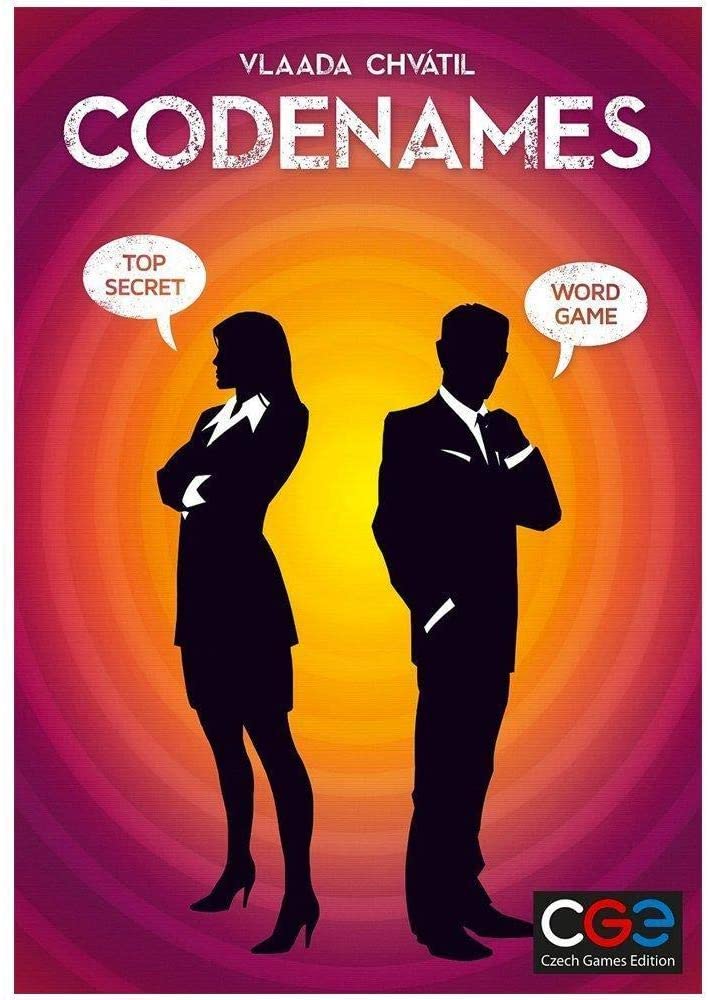 Codenames is a game of hints and guessing. Sure, you may have had played Scrabble, but this is where your words and semantics are important. You’ll work in teams, where a player will use a word to connect those laid out in front of you, allowing you to identify one or more secret agents. The tough part is in making sure your hint doesn’t lead the team to pick the wrong cards, being either a victory for the other team, or an assassin card that means you instantly lose!

Codenames can be played in teams, meaning you’ll easily group together and can muddle these in turns to let everyone play with other family members. You’ll be able to tailor the difficulty naturally for the group you play with, so it’s accessible to everyone. Add in the variations it offers, including even a Disney and a Marvel version, there’s a real chance you can find one that appeals to your family specifically. And as word games go… it’s arguably more conversation inducing than scrabble.

A Game of Cat and Mouth

2 plus Players in Tournament Mode 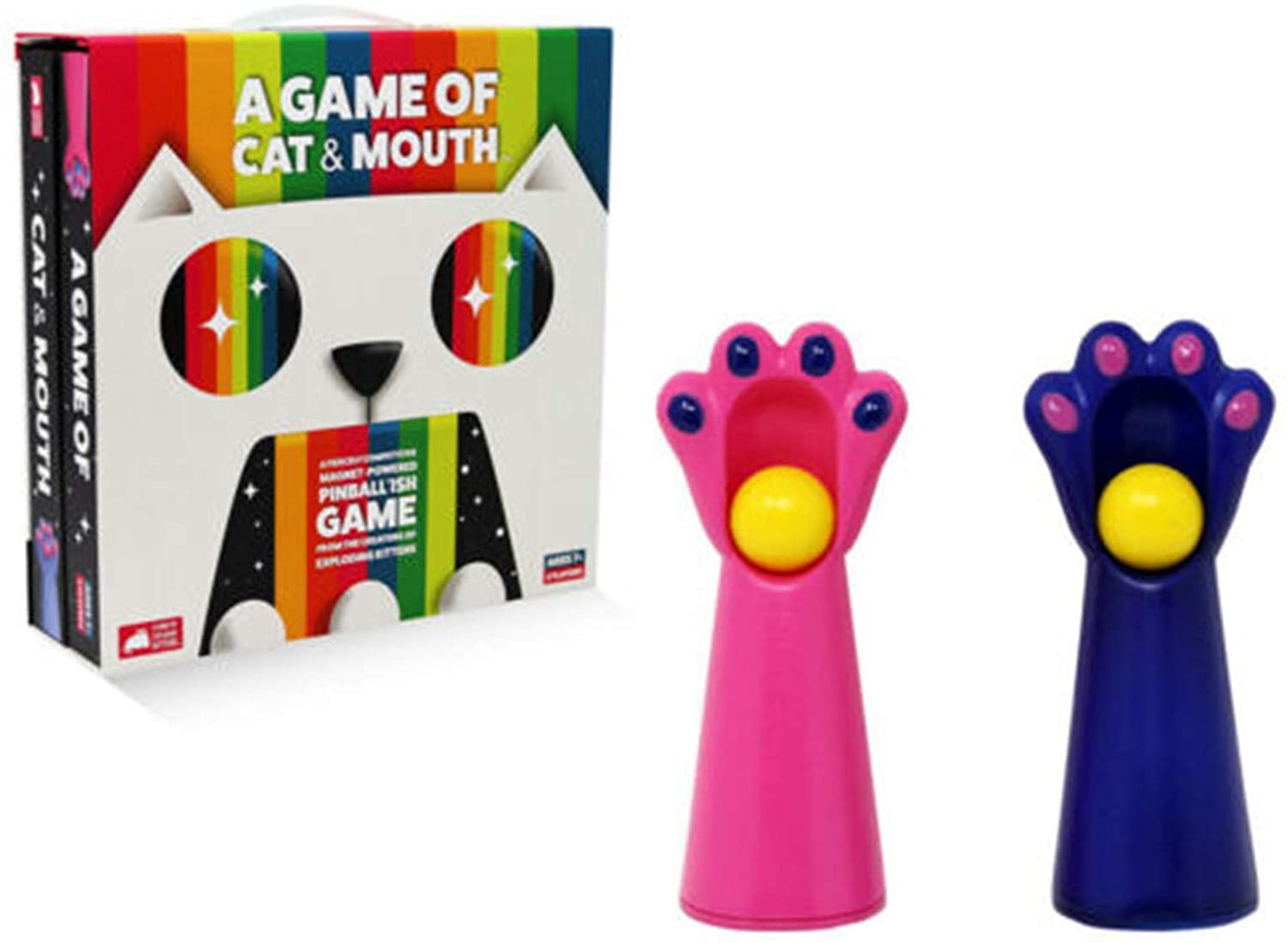 A Game of Cat and Mouth is a pinball-ish, air hockey-ish, bundle of fun. It’s a tidy box with minimal set up – it folds out into the table, and you just insert a few bits to be ready to go- and you’re away. You’ll pull back a magnetic paw with a ball included, and try to fire it through the cat head in the middle, scoring points by knocking certain balls to the other players side. It comes with a tournament mode, which means the whole family can play, and is fun to watch too!

The game is an addictive, competitive, simple and fun game to play. If you sit there on Christmas and hope for a cat based crazy battle to be crowned champion, this is the game for you. No faffing around with set up or with rules, you can start within a minute. And whilst you like to think it’s skill, there’s a certain amount of luck – so anyone can win! Be prepared for Grandma to bring her A-Game and soar to victory. 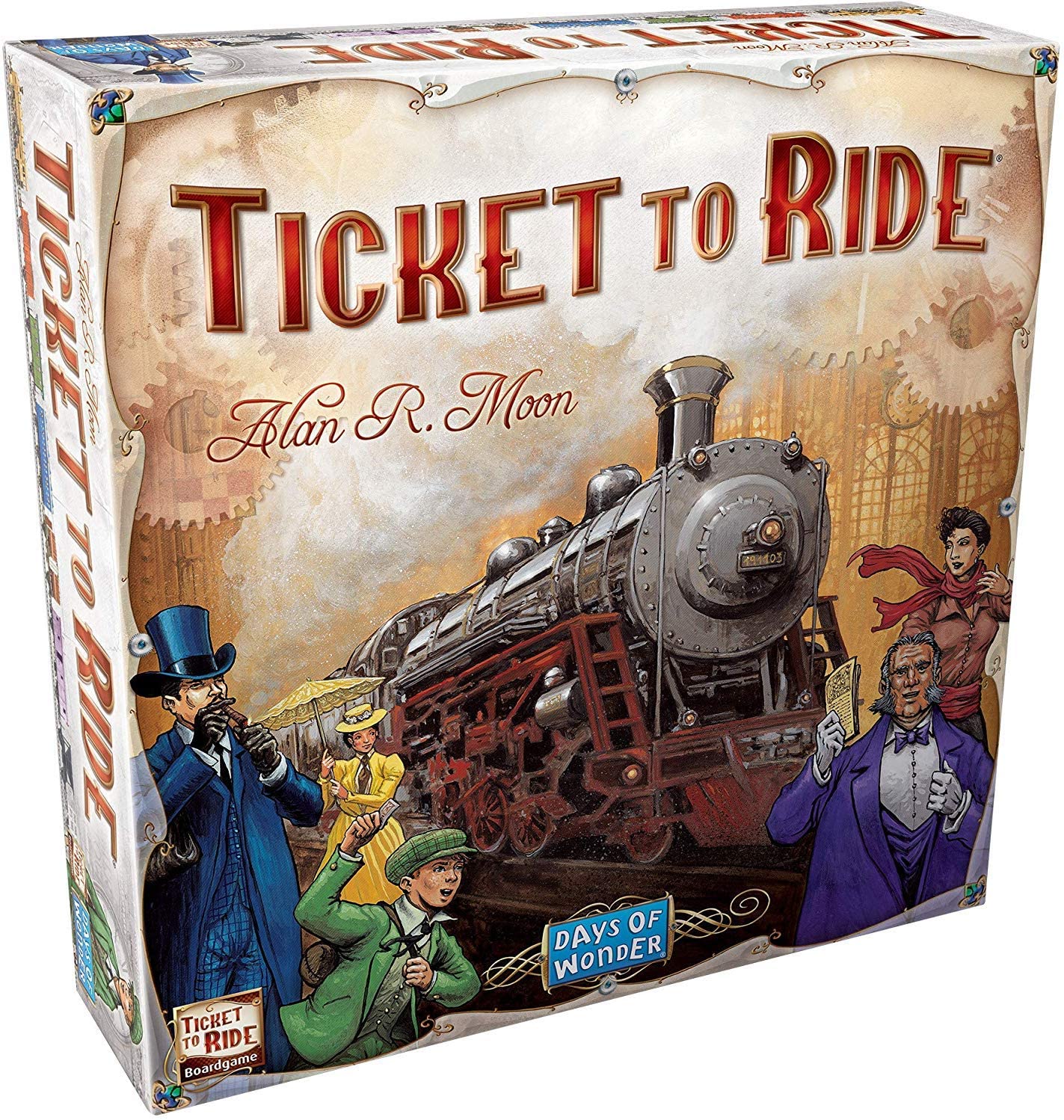 Ticket to Ride: Europe is a standalone game that takes you on a new train adventure across turn of the century Europe. You’ll have routes you’ll need to try to plot to gain points, but remember that others may want the same routes, and may block your attempts! You’ll need to do the same to them though in order to win. Clear your tickets to gain your points!

This may be one of the smaller player counts, but it’s a traditional gateway game. If you’re looking for a calm and relaxed afternoon plotting your way around Europe, this is one of those easy sell games that might make your next recommendation be trusted even more. It’s easy to learn and to play, so friendly for families old and young alike. There’s also an Alexa app for you to keep track of scores, with atmospheric sound effects and music, so a way to keep everyone included, and you might accidentally even plot the route Santa took to your home.

Plus a Star Wars Flavour (Amongst others!) 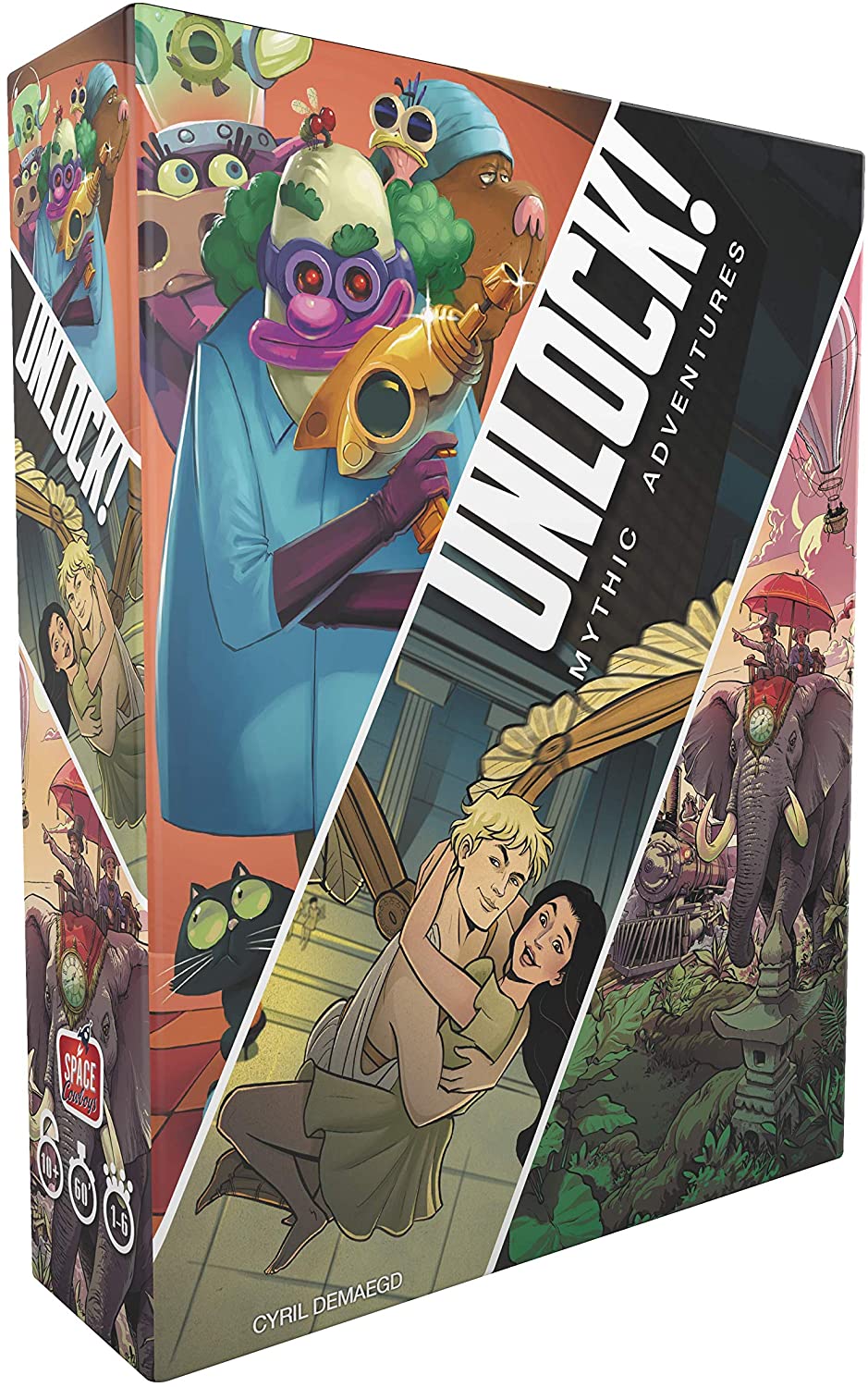 If you have trouble with competitiveness, then a co-operative game is a necessity. The Unlock Series sees you try to solve the puzzles in order to escape, using numbered cards to keep you guessing. Alongside an app that counts down your time, penalises your mistakes with precious time, but also offers reasonably hints and suggestions when you get stuck, this is an escape room in a box.

Escape rooms are all about thinking a little differently, and that means there’s a chance for every person in the family on the day to discover something the others may not see. Working together under a time pressure forces you to communicate, and this will need your very best! There are three adventures included, so up to 3 hours of fun (if you escape within the time), and no physical energy needed. Great for awakening that a post-turkey brain. Unlock comes in all kinds of flavours too, so although Star Wars was the last I played, there’s everything from time to fantasy. 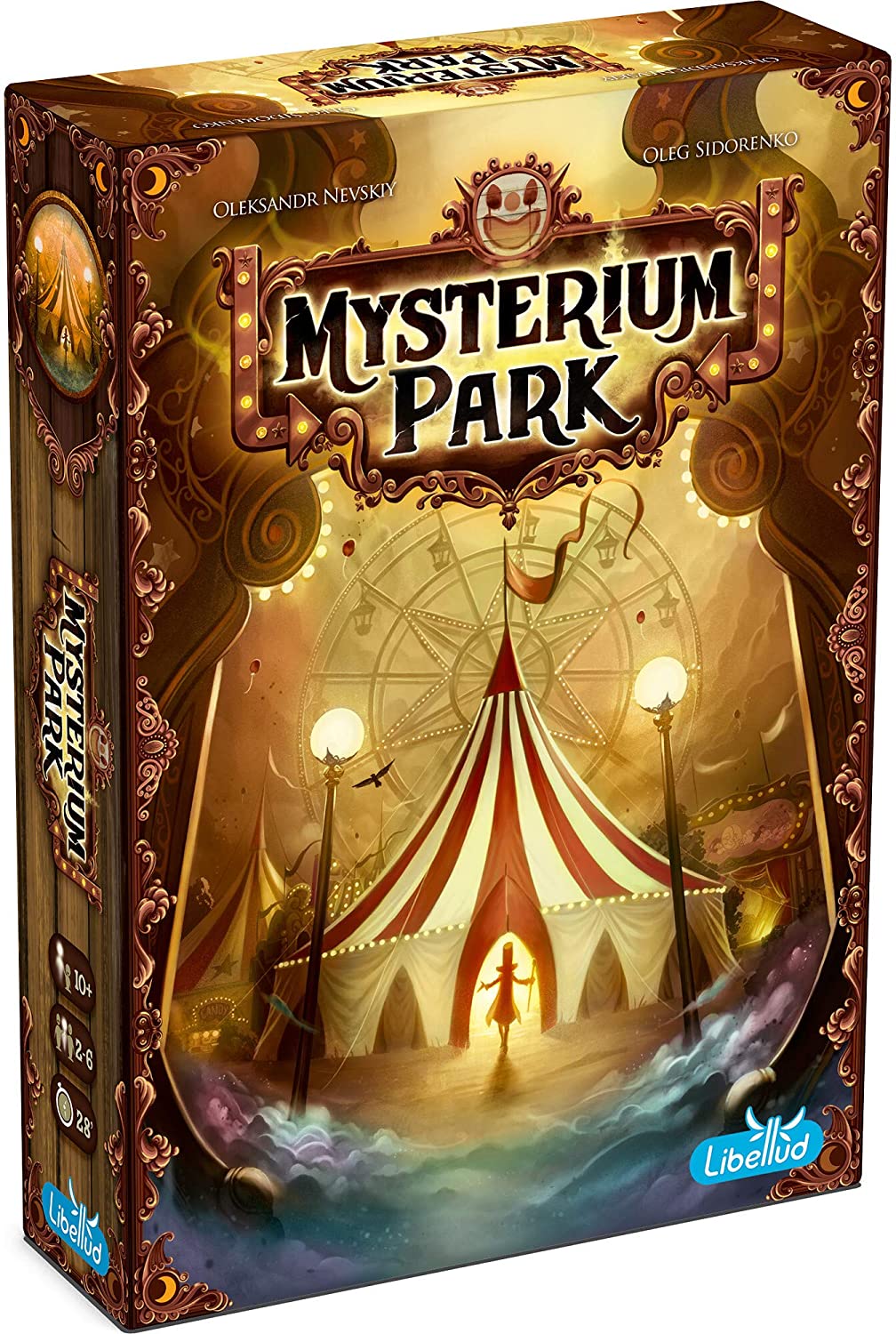 Scrooge got to meet the Ghosts of Christmas Past, Present, and future, and that turned out really well for him – so why not meet a few ghosts for your Christmas too? This game edges a little away from the party, closer to a board game, and a little more rules, so if you have a family who want to get down to play the real games – but don’t know where to start – they could do no better than Mysterium, or Mysterium Park. You’ll be communicating with a ghost through abstract visions they send you made up of gorgeous art pieces, to try to guide you to understand what happened to them.

Both Mysterium and Mysterium Park (the latter being a slightly improved/tidier version) are gateway games into the hobby. They’re easy to learn, fun to play, and they get everyone talking. There may not be sleighbells ringing in the theming of this game – a spooky carnival and ghost – but it’s a fun and cooperative game that will have everyone talking about their accidental wins for some time.