Crusaders: Thy Will Be Done is a fascinating spin on mancala inspired by Stefan Feld's Trajan With a doubt, mancala is a stone-cold classic: the simple game of redistributing counters and capturing your rivals’ pieces as you jump from hole to hole has been around for well over 1,000 years and continues to be a worldwide favourite.

Despite – and because of – that popularity and influence, it’s maybe surprising (or not) that so few modern games have attempted to put their own spin on the basic premise. That's not to say they don't exist at all: Five Tribes and Trajan are just two recent examples.

Seth Jaffee is the next designer to turn his talent to adapting mancala’s gameplay into a new form, with his upcoming game Crusaders: Thy Will Be Done.

Interestingly, Crusaders was actually inspired by early reports of Trajan’s mancala-like rules, although Jaffee was seemingly disappointed that Stefan Feld’s 2011 game of Roman politics ultimately relied on where the final piece was placed, rather than where the pieces were taken from.

“My guess was that on your turn you would choose an action to do, resolve that action based on the number of action tokens in that space on the rondel (the more, the better), then distribute those tokens around the rondel a-la mancala,” Jaffee writes on Crusaders’ Kickstarter page.

“This sounded fantastic, as each action would sort of grow in power until you take it, then it would revert back to zero, and you'd have to build it back up before taking it again. I was really excited about this idea, and waited with baited breath for Trajan to come out... only to find that I'd guessed wrong! Trajan did not work the way I thought it might, instead that game has you choose a bin, distribute the tokens around the rondel, and then perform the action associated with the last bin you land on.”

Crusaders reverses the mechanic, allowing players to execute an action based on how many counters are on one of their personal rondel’s wedges, before redistributing the pieces around the rest of the circle.

This powers the core of the game, as players’ knights explore Europe and the Middle East, battling rivals and constructing buildings such as churches from off their player board to increase their influence.

Players will also be able to upgrade their rondel, swapping out sections for better wedges and more powerful actions.

"Trajan's mechanism is interesting, but it can be difficult to plan ahead,” Jaffee continues. “A small mistake (or an opponent beating you to an objective) doesn't just set you back, it forces you to drop all of your plans and start again, because all your bins have the wrong number of tokens now. I thought that my incorrect guess at the mechanism would make for an entirely different mechanical experience, one well worth pursuing. Looking at how Crusaders turned out, I think I can safely say I was right." 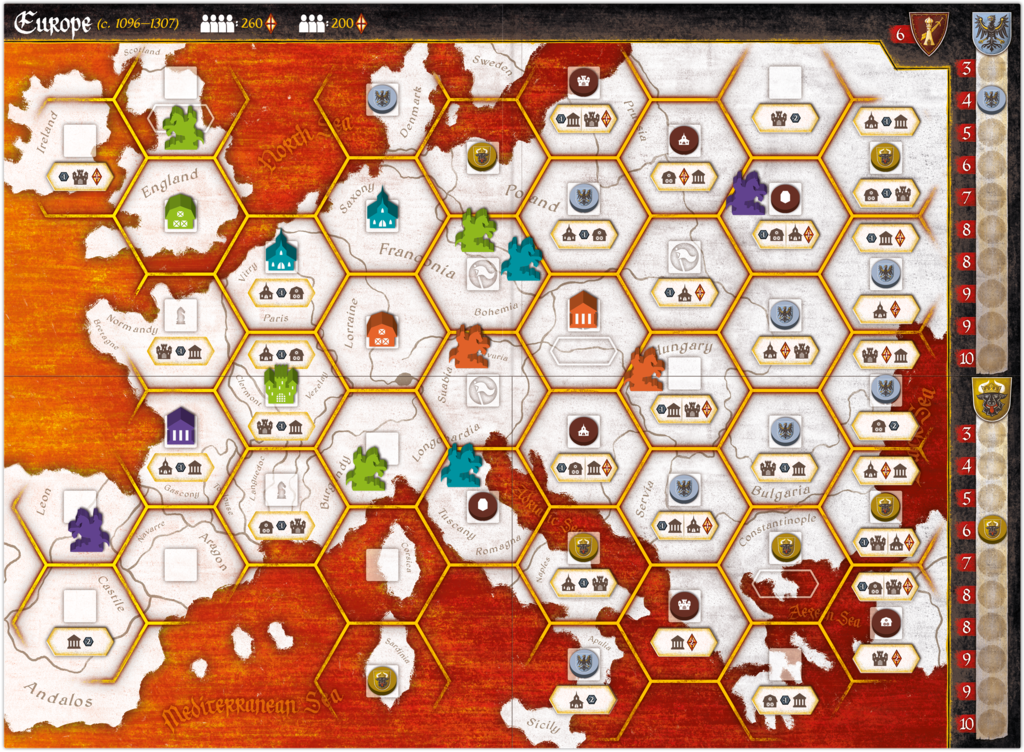 The box includes a double-sided game board to support up to four players, depicting the 12th-century world. Each of the ten knights in the game features a different power, with the characters based on the historical Crusading Orders.

The game is due for release next June.