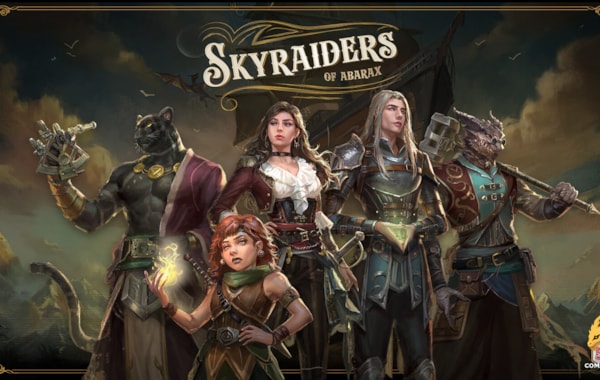 Best known for their work on Dragonlance, co creators Tracy and Laura Hickman have announced an epic 5E adventure.

Named Skyraiders of Abarax, but with little additional information provided, it's caused much speculation and excitement for what may be to come.

Though the official website has yet to reveal any particular detail, it uses the tagline “On Dragon’s sylph to find our lost way back/To that mythic place called home", and confirms to be using the unique "Living Tome System".

Through a number of social media images, again featuring aspects like ships floating in the air, comes the following prose:

"Long centuries past the aeroships imperial, enforcers of our exile silently vanished from the skies

Forsaken on the prison isle, our ancestors broke from their chains and keepers to forge survival from their ruined past

Yet our hearts still are fixed upon that empty horizon, beyond a treacherous sea, yearning for lands of which we’ve only dreamed.

To the winds, buccaneers! To the storm! Skyraiders fly! On dragon’s Sylph to find our lost way back to that mythic place called home."

Outside of this, only a spectacular image has been provided, seemingly of a swashbuckling crew of adventurers in adventuring gear – but with a steampunk vibe that cannot be ignored. The Adventurers stand before a floating ship, offering some strong sea-pirate vibes.

Whilst it's certainly information-light, we'll be looking forward to what may come.