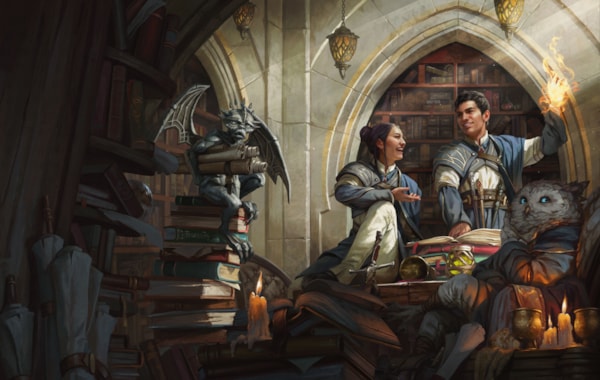 Just a dash of magic

You may have seen the news leak this weekend, but the formal announcement is here: D&D are releasing Strixhaven: A Curriculum of Chaos, a new book set within the Magic the Gathering realm and area of Strixhaven, seen in its new cards.

Releasing November 16th, you'll actually be able to find ways to play through the Unearthed Arcana as of now, with it offering the following:

"Become a student of magic in this installment of Unearthed Arcana! This playtest document presents five subclasses for Dungeons & Dragons. Each of these subclasses allows you to play a mage associated with one of the five colleges of Strixhaven, a university of magic. These subclasses are special, with each one being available to more than one class."

Given how early the announcement for this has come (in reference to release date), there's plenty of time for necessary tweaking, and you can have a part of its development by playing it through the UA.

The final version will hold a standard cover by Magali Villeneuve, and an alternative art cover by Hydro74, and although there's no versions available yet, the latter also produced the alternative art cover for The Wild Beyond the Witchlight, the announcement of a new campaign book set in the feywild that was made yesterday.

More detail will be available through D&D Live 2021 presented by G4 on the 16th and §7th of July, with new characters, monsters, mechanics, and story hooks. It'll retail in USD at $49.95. You can visit the D&D page for it here, or alternatively, check in with your Friendly Local Game Store for pre-order options.

Missed yesterdays announcement? Check out The Wild Beyond the Witchlight here.