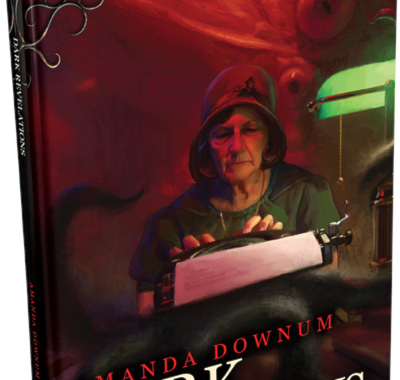 It's no new news that there are regular additions to the fictional worlds of something like Arkham Horror, but it's always fun to see the worlds we love playing in expanding even further. With that, it's great news to hear Fantasy Flight Games have announced a new novella that sounds like something worth a read - plus, there are promo cards!

Named Dark Revelations, the Arkham Horror novella from Amanda Downum, which is available for pre-order now. The tale follows Gloria Goldberg, who has always been plagued by nightmares and apocalyptic visions for her entire life, which she's turned into a career as a novelist. After a vision of her friend asking for help to finish what he started, she receives word of his death.

She travels to Arkham to collect his work, but finds his story bleeds into reality. She'll need to change the end of the story before it brings a new world!

If that didn't sound an interesting enough premise, it also includes a sixteen page colour insert with newspaper clippings, notebooks, artwork, and other sources. Plus, there are promo cards for the Arkham Horror Card Game.

You'll find Gloria Goldberg available as an investigator. She'll be included within packs later, but this will give you a headstart. Plus, there's a new and powerful way to use the encounter cards with Ruth Westmacott, which lets you capture the carsd beneath Gloria and feed them back into the discard pile, rewarding you for keeping cards - however, the additional card Liber Omnium Finium, is a weakness forcing you to draw an encounter card from underneath Gloria and ensure the effects are devastating. Will it be worth it? You decide.

The novella will be released in November, and can be pre-ordered from FLGS and Fantasy Flight Games directly, with more info over on their site.