It's time for a tiny RPG focussed month.

It is a truth universally acknowledged that we buy expect an outpouring of Zines from indie RPG creators around this time every year. Or at least, for the last few years, and further, as part of Zine Quest, an event run by Kickstarter to add an additional spotlight to the genre. However, when Kickstarter shifted Zine Quest to August a mere two weeks ahead of its usual launch, citing GenCon alignment as a reason for doing so, the indie community mobilised and raised a replacement Zine Month. Zine Month, or ZiMo, collects RPGs submitted to it across a number of crowdfunded platforms and allows creators a new way to show off what they've got.

With ZiMo kicking off yesterday, and due to take place throughout the whole of February, we're going to take a look at ten that caught our eye that have been posted so far. Of course, stay tuned for those launching throughout the month, and be sure to let us know your favourites too! 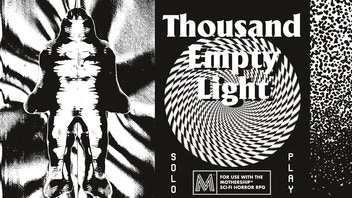 "Thought space was full of horror? Try being trapped 50 metres underwater. On your own. In the dark."

In the Mothership RPG that describes itself as a 'psychedelic-xerox adventure', you're a lamplighter hired by the HAZMOS service corporation to enter the tunnel (alone) and restore both power and light to each of the sections. Of course, in delightful space horror, there's nothing to say you remain alone, but in the dark it's hard to tell who – or what– you may encounter. Using a delightfully described in-universe corporate document, described as having a dash of red tape bureurocracy, and a splash of 80s synthesiser, it cites its inspiration as that such as cave diving accidents, a Lovecraft story, and corporate training manuals – the latter being perhaps the biggest horror indeed.

By? Valley of Alfred

Location? Over on Kickstarter until February 15th 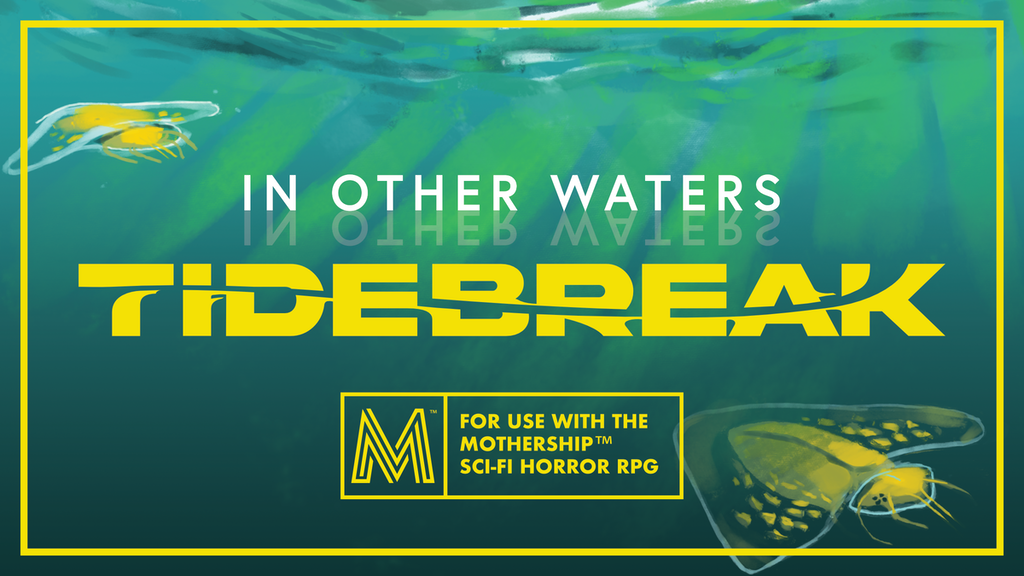 Similarly on the Mothership system, based on an award winning video game and set after the events of In Other Waters, Tidebreak is an underwater exploration game, allowing you to explore the panthalassic world of Gliese 667Cc. What that means (for those of us who had to google Panthalassic and remain unsure), is you're exploring the world wide ocean before it is cordoned off, attempting to discover alien creatures, environments, ecosystems, and secrets.  Nicely, you don't need the game that precedes it in order to play, but you will need a copy of Mothership to play the adventure module with crew. It's worth noting that despite the idyllic ocean exploration game it presents – it's a horror game at its core.

Because what could possibly go wrong when you're underwater with unfamiliar creatures?

By? Lone Archivist & Jump Over The Age

Location? Find it on Kickstarter until March 1st 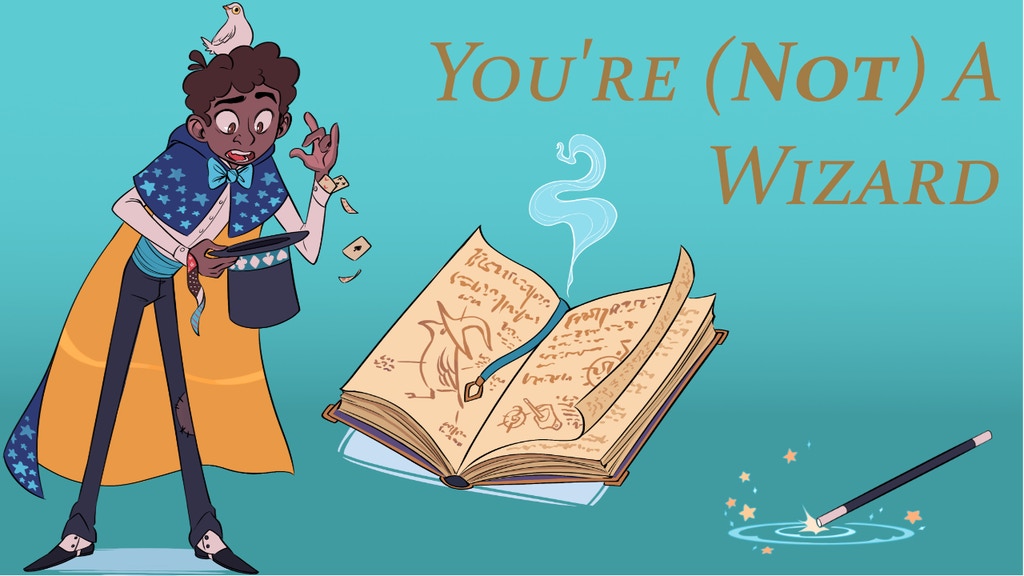 To break up the horror we appear to have led with, how about an RPG that caught our eye with simply a delightful premise – what happens if you're accepted into a prestigious magic school (in fact THE most prestigious) but... it's all a mistake. You have absolutely no magic, and so whilst you couldn't possibly decline the invitation (for a varying number of reasons that are part of your character), you're going to have to bluff and scheme your way through school to avoid getting caught. An amusing way to turn imposter feelings on their head, by playing knowingly as one. The game is based on the Powered by the Apocalypse system, but the zine contains everything you'll need to know to get started.

Location? Kickstarter, and you can find it until February 17th 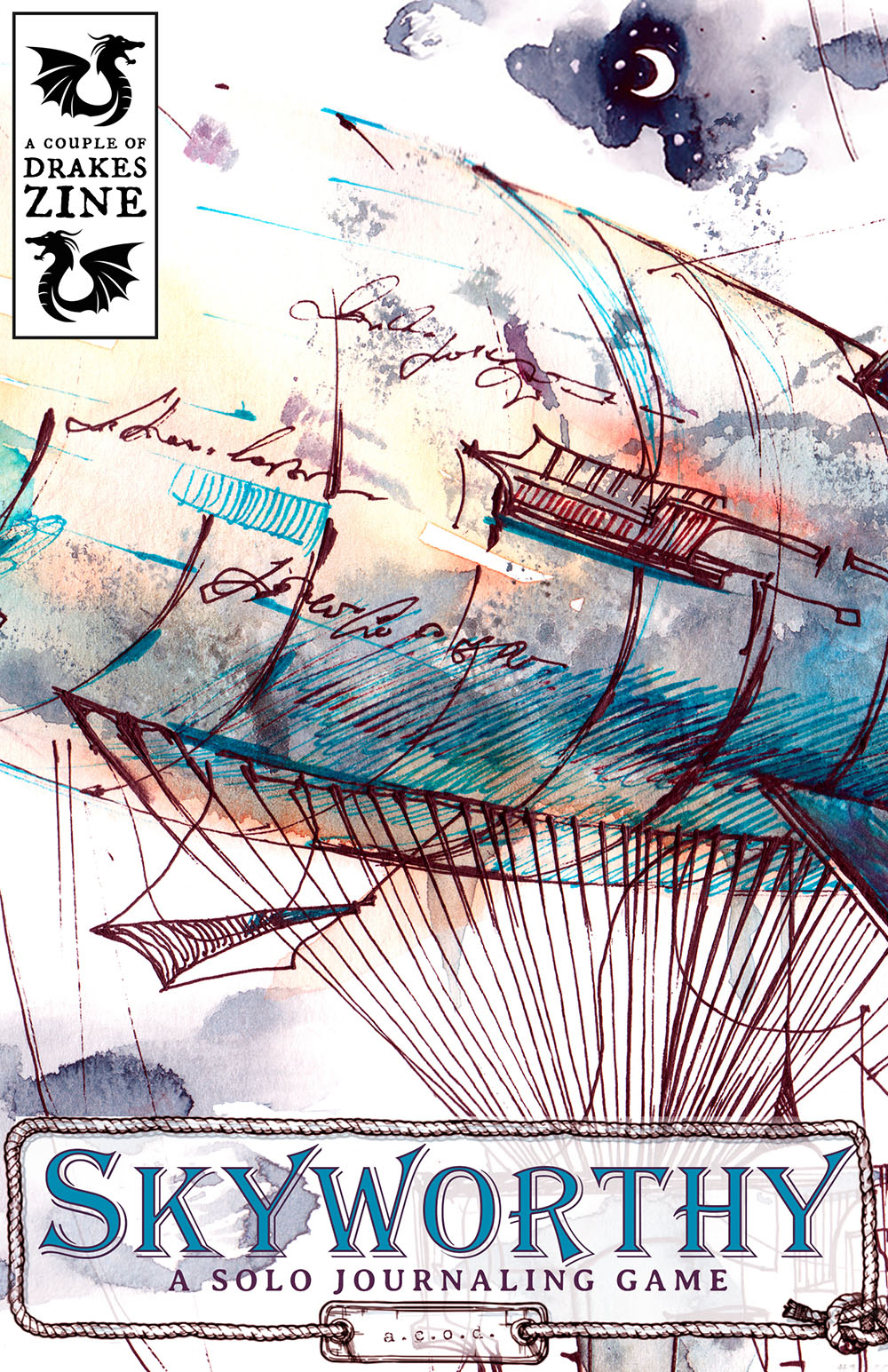 "Captains will come and go as they age, sicken, retire, tearfully sell you, or die by the hands of their enemies. Still, you will sail on."

With just a pack of playing cards, take to the skies – no, literally, as you're going to be playing as the sky vessel itself as a solo journalling RPG. You'll sail through four eras, starting with your commission and the many decisions as to how and why you may have begun, live through natural disasters, societal changes, modernising, new crews and captains, and ending where best suits your story – adrift? In a museum?

By? A Couple of Drakes

Cost? $9 for PDF and Print on Demand voucher (though as with all listed, shipping is calculated separately)

Location? The sky is the limit (except when it's not!) over on Itch.io 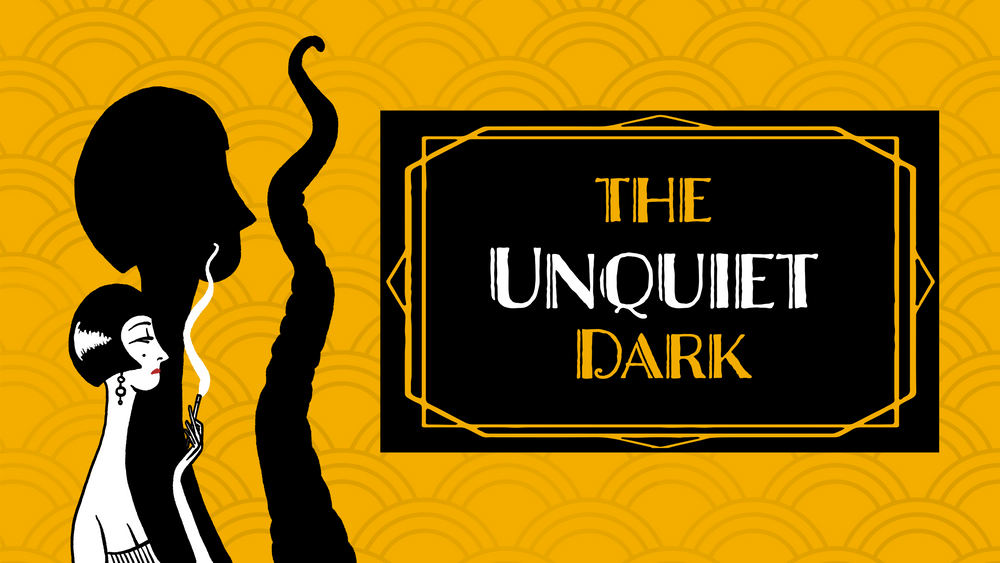 Darkness persists, and seemingly just as much so in Brindlewood Bay, the place that gave the name to an RPG from The Gauntlet that sees elderly women in a book club solving real life murder mysteries, and getting tangled more and more in the monstrous cult dedicated to the goddess Persephone – as this Zine sees you transported to the height of the Jazz age. You'll need the original to play, but once you do you're going to be working undercover, with some jazz age eldritch terror fun.

By? Alicia Furnesss and Chris Bissette

Location? Find the Unquiet Dark on Kickstarter until February 24th

6. Procedures To Discover the Path Ahead 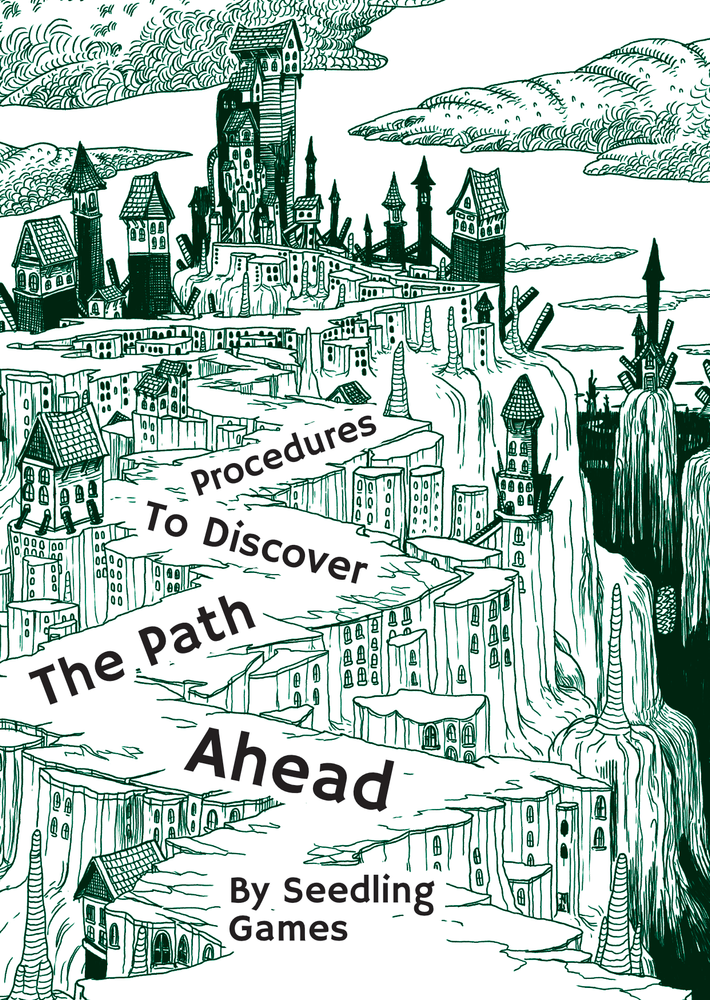 In a project that is both a solo game, and a GM prep device, you'll need only a D6, a pen and paper, and a rough idea to be on your way to creating a whole world. Either create it as you go, as a solo player, or create the world in advance, as a GM. Or, simply, just roll until you've made a pleasing map.

The Zine will see you rolling the die and adding the counter, before seeing what paths lie before you. There are tables and options to prompt you with where it may go next, and it's up to you to either tell a story of discovery, of cartography, or even your most recent journey. The tables will give you options for things such as the use of the land, what may be there, what kind of society resites there, any industry, how it is ruled, etc. A gentle method of mapping out an entire world.

Cost? $5.05, but a print run will be plausible at higher numbers

7. The Kourt of Exile 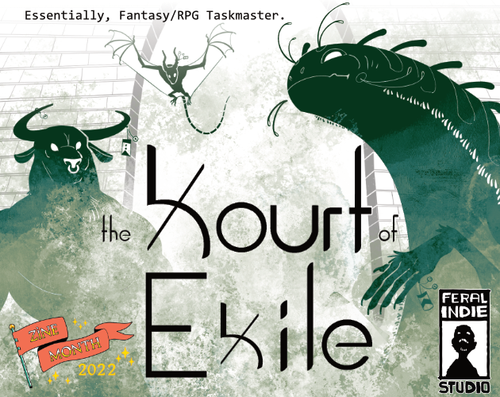 Over the bridge and past the guards is the Kourt of Exile, a pit stop for those in need of a change of scenery for whatever reason, and you have your own reasons. Only you can't get there without paying the toll, and you've simply not got the funds. As luck would have it, there's a tournament occurring with a cash prize, and just like that, you have an opportunity to take part and a motivation to win. Only... the tournament isn't quite what you'd expect, rather than a jousting tournament, or a battle of puns, it's a series of benign tasks that you'll need to find the solution for. Described as being inspired by the game show Taskmaster, "the points are not always fair, but hopefully still fun"

Location? Find The Kourt of Exile on Itch.io 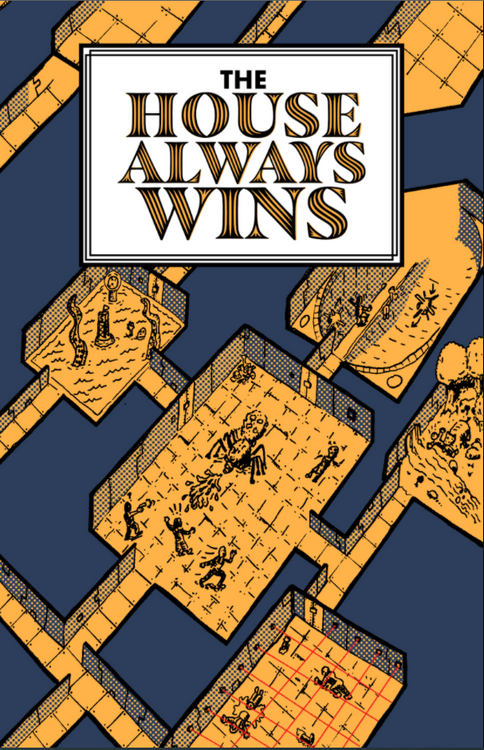 "The Dream. A sector-wide broadcast event featuring death, gore, and everything in between. Players run through room after room of corporate branded murder. The prize? Any wish you desire within the major four corporations power to grant. "

Obsessed with Squid Games? How about another deadly game show to dive right into? The House Always wins is a a Mothership Sci-fi Horror RPG compatible RPG in which you're seeking a wish from corporate sponsors, made possible only by winning. Except they're equally working to get their own wish from the game's founder, Cornelia, so nothing is quite as it seems.

You can even die several times, thanks to cloning technology, so the horror may well never end

Location? Find it over on Itch.io, but remember - the house always wins.

9. Lilliputian: Adventure on the Open Seas 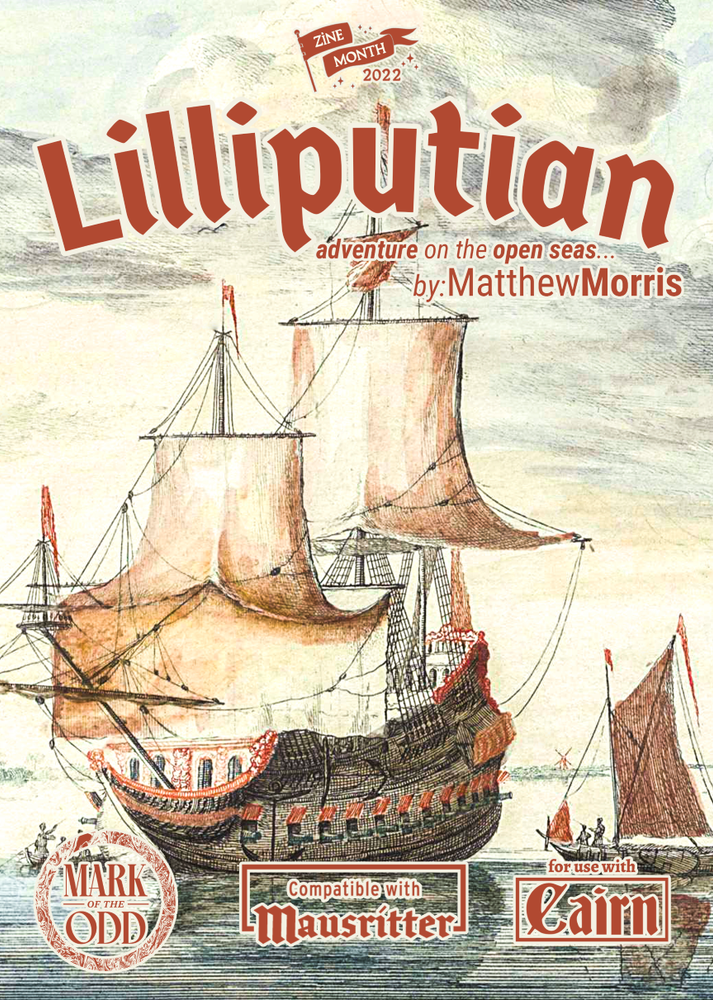 If you've ever wanted to be a Mouse in an RPG, you've probably come across Mausritter. And perhaps you've come across Mausrittter, and thought it perhspa needed steampunk victorian era skyship captains for use with Into the Odd or Electric Bastionland, or conversions for use with Cairn. And if you thought all that – or just liked the sound of it – you're probably going to want to check out Lilliputian: Adventure on the Open Seas.

Location? Take to the high seas of Itch.io

"The Age of Man is over, now dawns the Age of Beasts!" 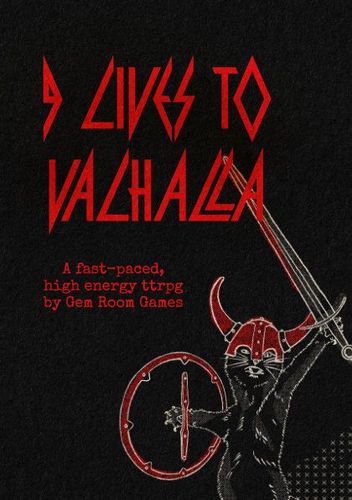 Or at least rather fluffy ones with multiple lives to their name, as this is a "frenetic, gleefully ultraviolet" TTRPG about death metal Viking cats earning their seat in Valhalla. Guided personally by Death, it's a standalone rules-light game that throws fluffy animal adventures into a dark fantasy world, and by GEm Room Games, who are responsible for games focussing on Ducktales traditions within Mork Borg,  gig economy metro workers in a world where no one dies, using Forged In the Dark , and hardworking HR workers in space. What we're saying is, Viking murder cats seems perfectly reasonable as a result.

Cost? £8 for a physical copy

Location? A purr-fect ending, find 9 Lives to Valhalla on Kickstarter