Where Did it All Begin for High Rise and The Networks Creator, Gil Hova? As part of our First Turn feature, Gil Hova talks about his difficult 2010 debut, Prolix 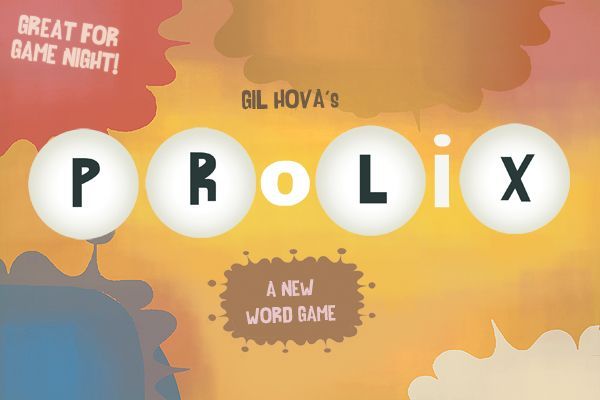 “I was a sound editor in film – my big claim to fame was the first two Pokémon movies – but I’d always wanted to design video games. So I started trying to learn how to program. At some point I realised I should learn how to make a game and thought, ‘Why don’t I learn to make a board game first?’ As a kid I’d played some pretty interesting games – Can’t Stop, Car Wars, BattleTech, OGRE – and I started back up with Munchkin (I didn’t really like it) and Settlers, but Puerto Rico was the first one that made me go: ‘Oh, wait a second. There’s something here.’ Eventually I realised I like board games more than I like video games.”

“Prolix was probably the fifth or sixth game I tried designing. I was at a local convention in 2008 and lots of people were playing a word game (I won’t disclose the name), and it was one of the worst games I’ve ever played. It was like a card-game version of Scrabble, very unfocused. I thought, ‘If this is where the bar is for word games, can I make a better one?’”

“I was too raw a designer to consider the kinds of people who would play it. My view on games were that they were a collection of mechanisms bound together by a theme. But games are so much more than what their mechanisms are. One of the shortcomings of Prolix was that I was looking at it from an entirely mechanical point of view. I was just like, ‘Do I enjoy this? Do my playtesters enjoy it? Cool. It must be a good game.’ I didn’t ever think, ‘We’ve got to step way back, because I don’t think the person who would buy this kind of game would enjoy this.’”

“There were a few challenges I had to overcome. I did one playtest with a player who was known for analysis paralysis, and the game took about two hours! It was brutal. I tried a timer. Nobody liked a timer. It was just miserable. So I came up with this bizarre system called the interrupt system, where you could sort of steal another player’s turn. Mechanically, it worked. But experientially, it was really bad. It’s the kind of mechanism that would have worked great in a strategy game, but not a word game.”

“Prolix is a word game for people who like longer words. You get eight consonants on the board and you’re trying to create the best word out of those eight letters. You can add any letters you want. The challenge is, it might be your turn, but another player can interrupt it if they see a word that they really like. But they’ve got to make sure it’s worth it.”

“The reviews were actually pretty solid, and it was published by Z-Man, but it did not sell that well. It’s just not a great game. I feel like Prolix was too complicated for its own good. So after the rights were reverted to me, I made another game that I feel fixes its flaws, and that game is Wordsy, which came out in 2017. Honestly, Wordsy is the better version of Prolix. It’s faster, it’s far easier to explain, everyone understands what they’re doing. It makes a lot more sense. So it’s always a little weird for me talking about Prolix. It’s dead to me, and it’s been autopsied.”