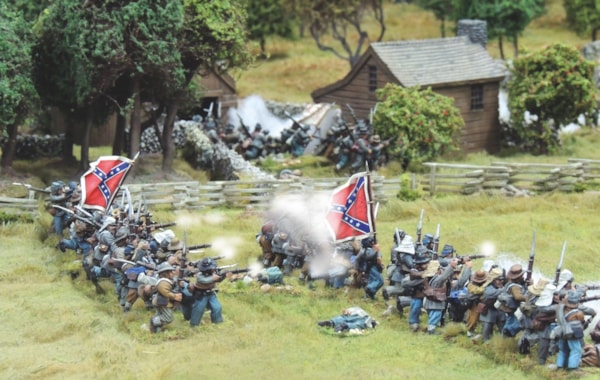 By Arthur Harman. Pictures by The Editor

To paraphrase a familiar military maxim: no wargame scenario survives contact with its players! So, rather than simply give the troops’ starting positions and objectives and thereafter leave the players free to issue orders that may alter events to such an extent that the resulting tabletop battle resembles its historical inspiration in name only.

I have decided to create a series of ‘Scenes’ (mini-scenarios, if you like), divided into two Acts (three articles, the Editor permitting), that will enable the players to more closely experience how the inexperienced Union troops ‘saw the elephant’ and the way the engagement unfolded, albeit sometimes in a rather unconventional way. Since the players will mostly be taking the roles of Union officers I have referred to ‘Rebels’ in their briefings and the game organiser’s notes, but to ‘Confederates’ when providing ideas for controlling or umpiring the enemy.

Readers should note that this article is aimed at prospective game organisers, not the players (for reasons which will become apparent), who should be actively discouraged or physically prevented from reading it before any of the games…

The Scenes are as follows: 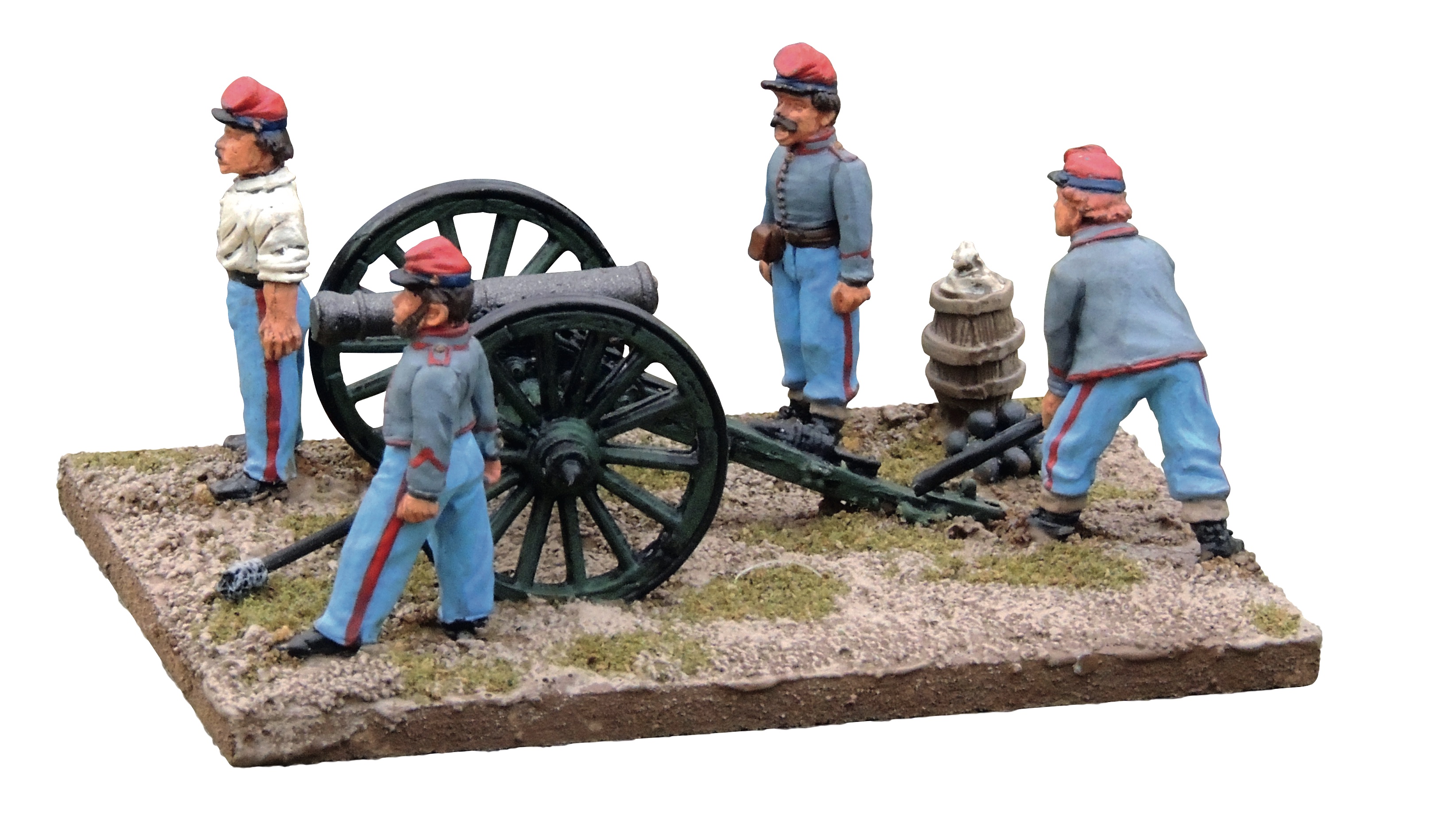 Prologue: an optional planning game in which players devise a plan to attack and capture the Rebel positions at Little Bethel and Big Bethel, that can be used for the approach march, if desired, or simply compared to the original plan. This Scene may be omitted if the game organiser simply wishes to recreate General Butler’s plan.

Act One, Scene I: a map kriegsspiel of the historical, or a player-devised, Union approach march, using the Big Bethel Theatre of Operations and  Big Bethel Diagram II Union Players map, go to tabletopgaming.co.uk/downloads which may lead to...

Act One, Scene II: a friendly fire incident, to be played if recreating Butler’s plan, or adapted to suit any similar situation arising from executing an alternative plan by the players. Refer to Diagram I: Friendly Fire. This can be downloaded from tabletopgaming.co.uk/downloads

Act One, Scene III: only necessary if a friendly fire incident has occurred short Council of War, which may (unlikely in the case of most wargamers!) result in the historical or alternative plan being abandoned, and thus end this series of games. 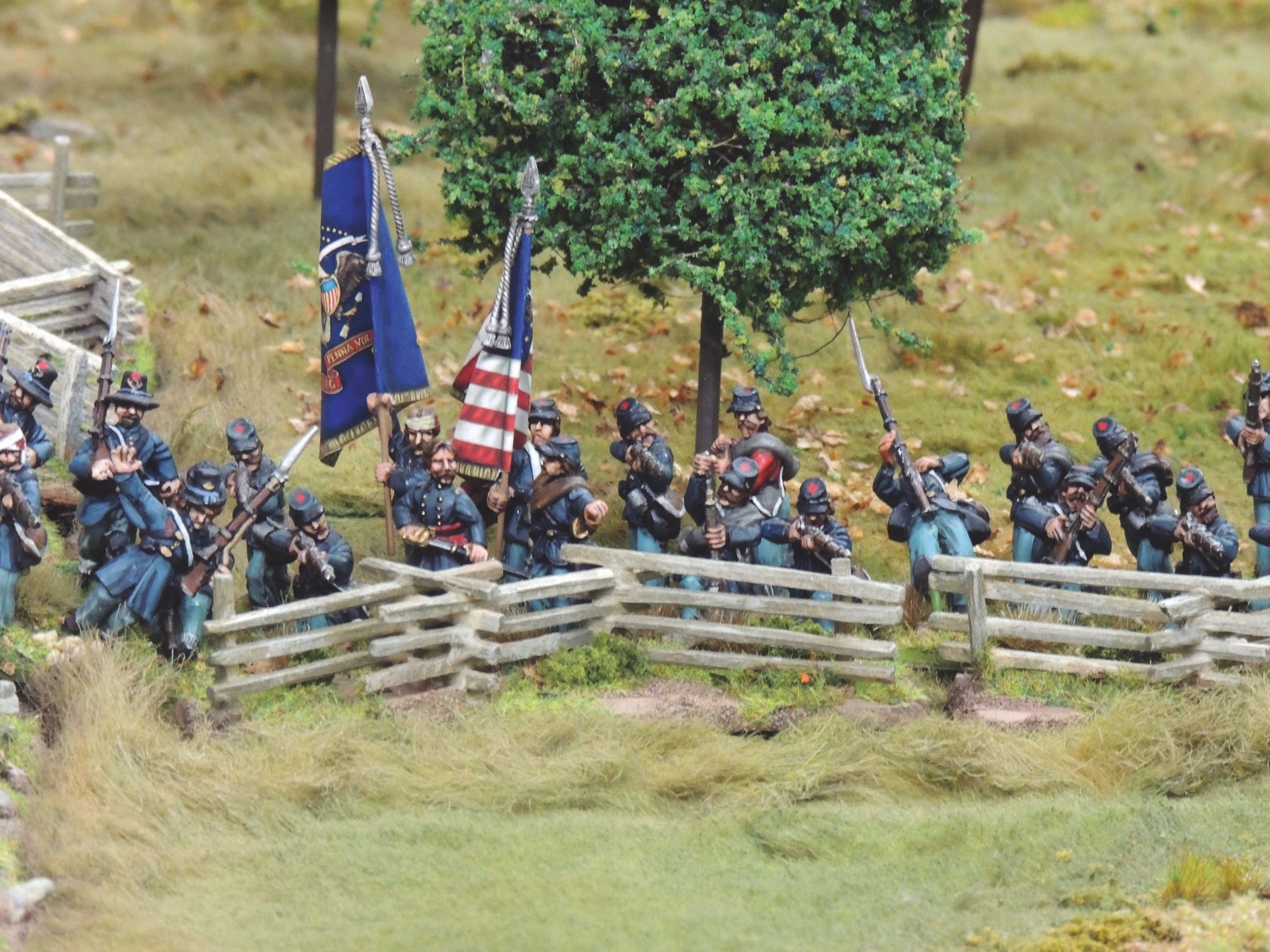 Game organisers who know the players would prefer to get the toy soldiers into action as soon as possible, can start the series of games with Scene II (see below), but not reveal the true situation to the players.

Readers can even choose to go straight to a more traditional, face to face, tabletop wargame, by using the orders of battle, the appropriate parts of Butler’s orders and Diagrams II, III and IV showing the layout of the wargame table for Scenes IV, V and VI to create a series of tactical games recreating episodes of the battle – or to wargame an ‘alternative history’ version of the engagement, by simply giving the Union players the blank map of the battlefield, letting them deploy their forces as they see fit, and accepting that any resemblance to the battle of Big Bethel will be entirely coincidental!

Prologue: “I did not deem the enterprise at all difficult” (Major-General Benjamin F. Butler)

A planning/committee game in which players taking the roles of General Benjamin Butler and his military secretary, Major Theodore Winthrop, and his aide de camp, Captain Peter Haggerty, produce a plan of operations against the Rebel positions at Little Bethel and Big Bethel. A road map of the theatre of operations is provided, upon copies of which players may work out and draw their plan of operations, before producing written orders for the commanders of the two columns, one from Camp Butler and one from Camp Hamilton.

Alternatively, the game organiser could give the players Butler’s original orders, summarised below, and invite them to produce a superior plan for the map kriegsspiel in Scene II. 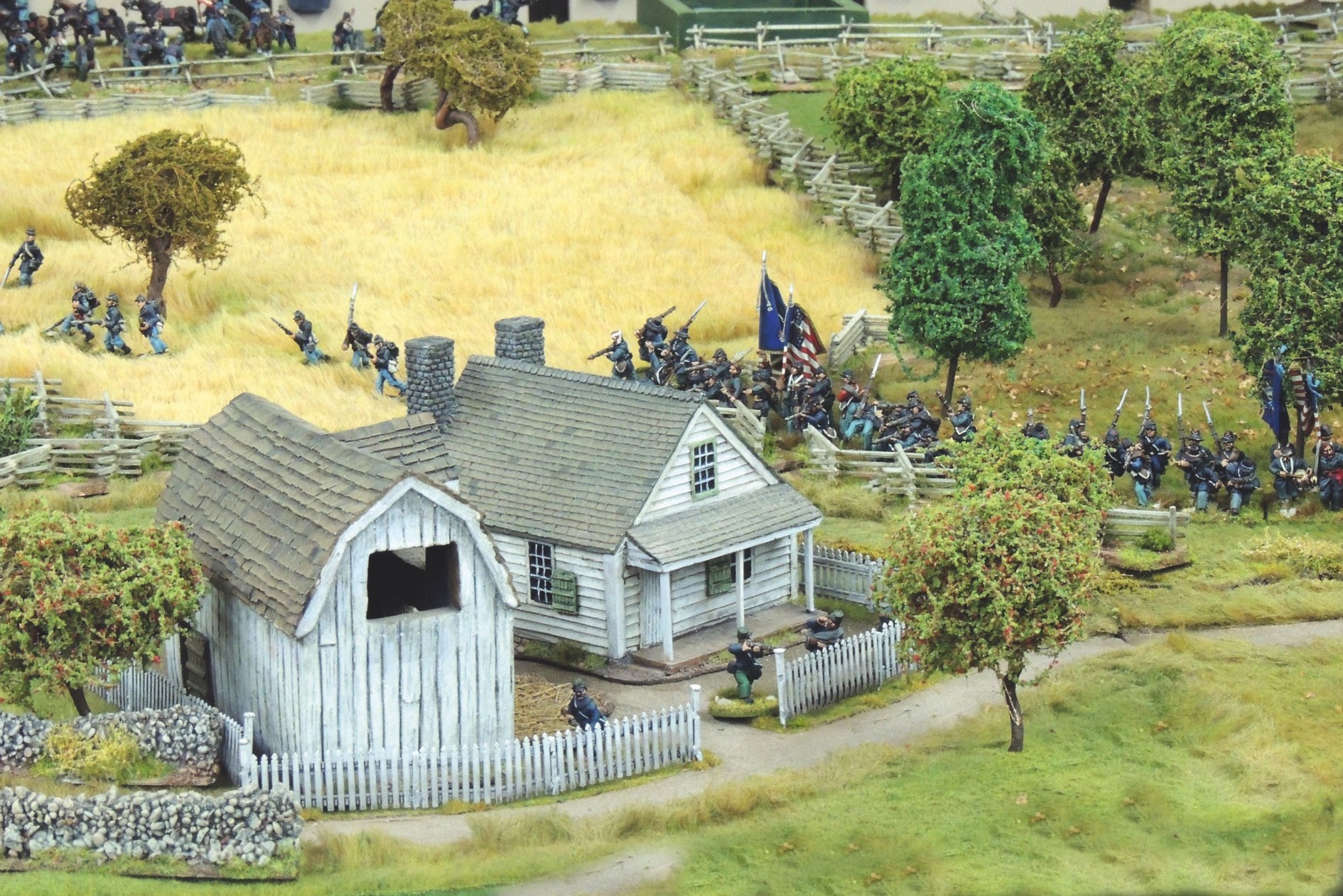 After failing twice to gain an appointment to West Point, you became a successful lawyer. At the head of the 8th Massachusetts Infantry, you put down secessionist riots in Annapolis and Baltimore, perhaps saving Washington from similar violence. President Abraham Lincoln promoted you to major-general, and Union Army Chief of Staff Lieutenant-General Winfield Scott put you in charge of the newly created Department of Virginia, which encompasses all Federal territory and troops within a sixty mile radius of Fort Monroe, with orders “not to let the enemy erect batteries to annoy Fort Monroe” and “to capture any batteries the enemy might have within a half day’s march of the fort,” but has removed the latter restriction following your occupation of Newport News.

The Rebels’ so-called ‘capital’ at Richmond, the primary Union objective, is about ninety miles west of Hampton and the overland route via the Hampton-Yorktown Road is the shortest approach. The County Bridge, which crosses an almost impassable marsh just south of Big Bethel Church, is therefore strategically important.

Scott wants a decisive, indisputable victory over the Rebels, a first blow that shall be so effectual as scarcely to require a second. Scouts and escaped slaves report that the Rebels are constructing earthworks at Little Bethel and Big Bethel Church. Draw up a plan to attack and secure both positions and the County Bridge to enable a future advance from Fort Monroe upon Richmond. Your military secretary, Major Theodore Winthrop, and your aide de camp, Captain Peter Haggerty, will assist you.

All too aware of your own lack of military experience – and to avoid being blamed yourself for any defeat – you will not lead the expedition in person but remain at Camp Hamilton. Command in the field devolve upon your second in command, Brigadier-General Ebenezer W. Pierce. Like you, he is a political appointment with no military experience beyond two years’ drill in the Massachusetts Militia, but as the senior officer he cannot be asked to serve under Colonel Phelps, the officer best qualified to command this expedition. At least he is unlikely to display brilliant leadership on the battlefield that might detract from the honour you will surely gain as the architect of a great victory at Bethel…

1st New York Infantry Regiment (750 men), Colonel William H. Allen, a drunkard insubordinate who allows his men to vandalise deserted homes. He claims his safe conduct ‘Colonel Allen passes’ are as valid as those signed by Pierce or yourself and that he, not Duryee, is the senior colonel on the lower Peninsula.

Once a detailed plan has been devised and written out, it may be compared to the original, summarised in Scene I, below. The game organiser and other players can then decide whether this plan is more likely to achieve success than the historical one, and if so, to what extent. The players’ plan can then form the basis of an ‘alternative history’ series of wargames, if so desired.

For General Butler and Staff 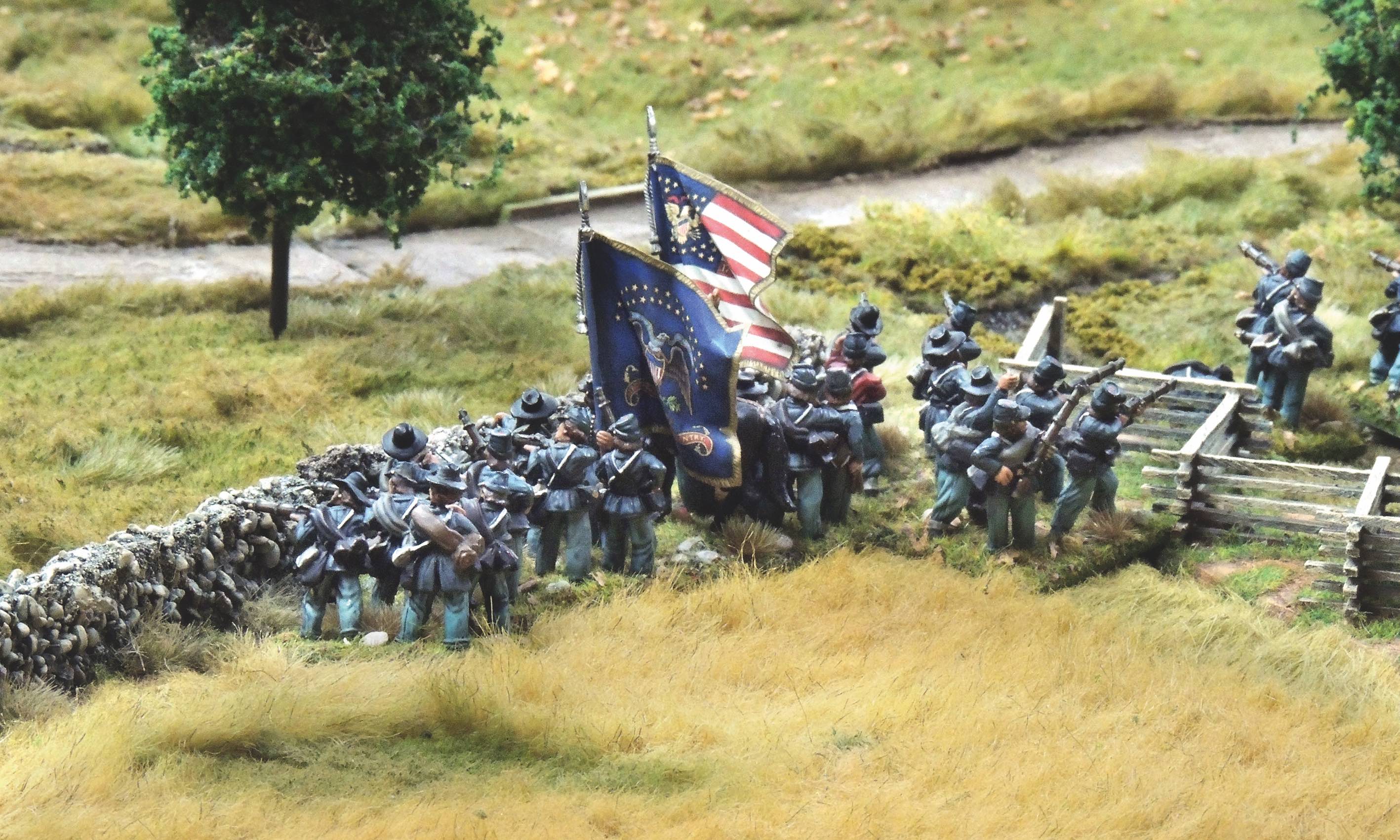 4th Massachusetts Volunteer Militia has recently been given new grey overcoats by the state governor to provide uniformity instead of different company uniforms, new knapsacks, haversacks and Springfield muskets to replace their old gear and smoothbore muskets.

Will the players realise the possibility that the variety of uniforms worn by the Union forces could be a source of confusion and issue orders to prevent it?

I have not concerned myself about the uniforms of the various Confederate units: firstly, many of them remained largely invisible to the Union troops, in the cover of their earthworks; secondly, they appear to have suffered little or no confusion resulting from any similarity of their uniforms to those of the enemy in the actual battle. Indeed, for much of the battle, only a few Confederate skirmishers need to appear on the tabletop or player displays. It will be sufficient for the game organiser to place Confederate artillery pieces and crews on the table or player displays when they reveal themselves by opening fire, and infantry when Union troops approach close to their skirmish lines or the earthworks.

The first of the scenarios, split into three ‘scenes’: a ‘kriegsspiel’, a tabletop skirmish game and a Committee game to finish up. The following month I will conclude with another three ‘scenes’.

This article originally appeared in issue 452 of Miniature Wargames. You can pick up your issue of the magazine here or subscribe to make sure you never miss another issue.