Ten of the Best: Games for kids Here's our round up of the Top 10 games for kids

With the summer holidays just around the corner, here's a round up of our top 10 games to keep the kids entertained.... 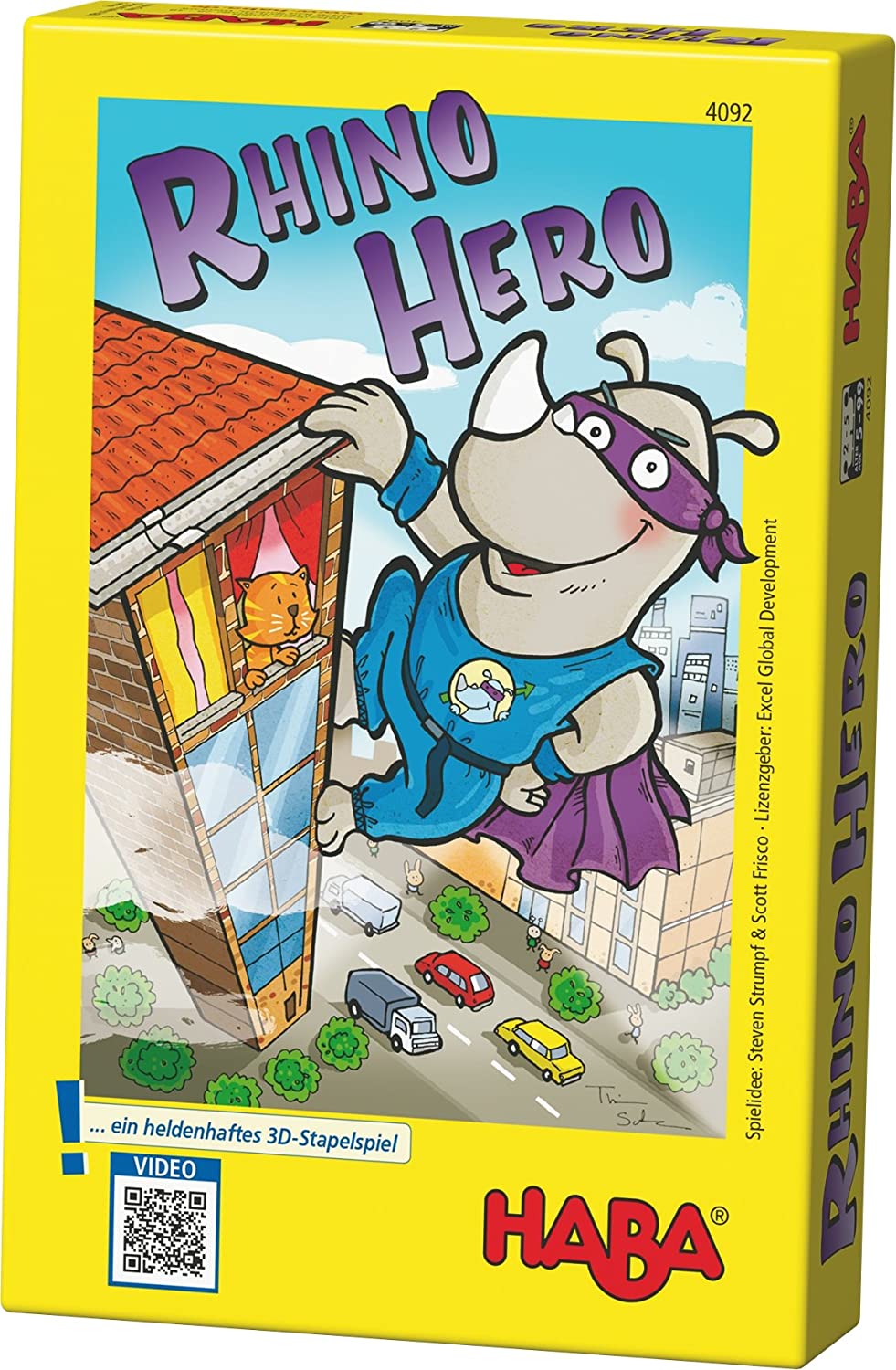 It doesn’t matter how old you are: everybody loves animals, everybody loves superheroes and everybody loves watching a tower of cardboard come crashing down. With all three tucked into its waistband, it’s no surprise that Rhino Hero is an utter joy. The premise works like Jenga in reverse: players take it in turns to slowly construct a teetering tower from walls and roof cards, with Rhino Hero occasionally bounding his way up the increasingly unstable building. The first person to play all their cards wins and accidentally collapsing the building is an instant loss – but, really, everybody wins given how fun it is.

Once they’re older: Once you’ve mastered the original, Rhino Hero: Super Battle adds an even more competitive edge to the entertaining dexterity gem with battles between multiple animal heroes. If you’re looking for another tricky balancing act with a fantastic look, Junk Art packs in a variety of game modes and gorgeous chunky components.
Buy your copy here
Content continues after advertisements 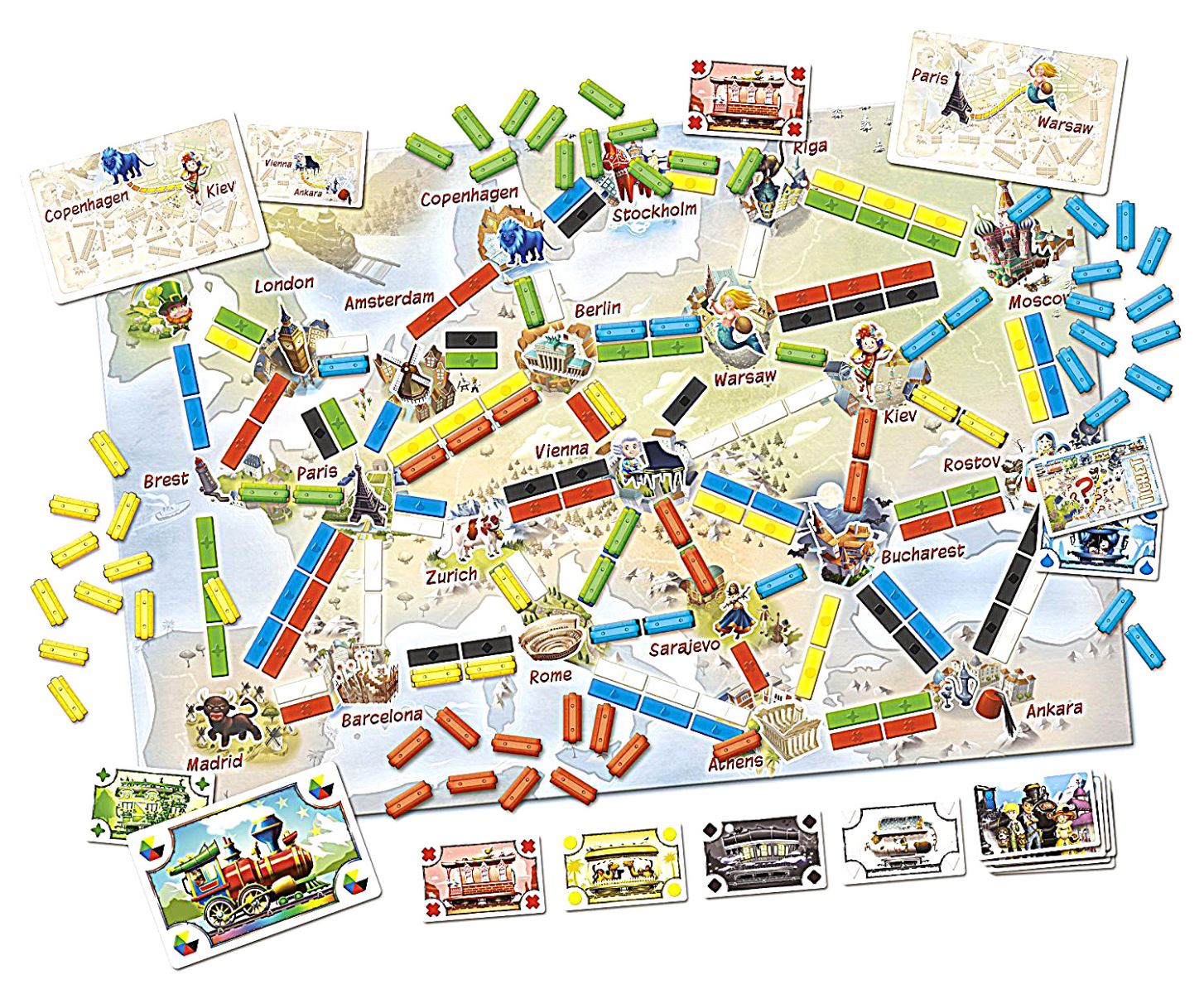 All aboard! First Journey may be a simplified and scaled-down version of the board gaming classic, but that doesn’t stop it chugging along with just as much joyous momentum. The basics are the same: collect train cards and play them to establish routes between cities, fulfilling tickets to score points. First Journey softens some of the risk-reward of drawing new tickets, ending when someone reaches six of their destinations or places 20 trains, making it much more kid-friendly without taking away its adult appeal. Plus, it’ll teach you geography – who says playing games can’t be educational?
Once they’re older: Ticket to Ride games are more commonplace than National Rail delays, so you won’t be short of birthday and Christmas ideas for a while.
Buy your copy here 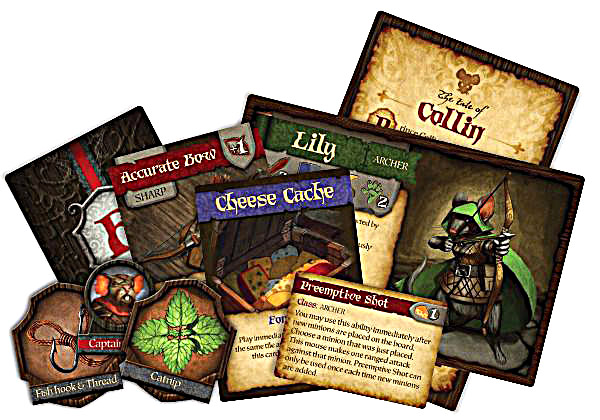 The equivalent of a storybook come to life, Jerry Hawthorne’s magical adventure is a co-operative game filled with excitement, drama and animals that’s sure to enthral young players during its campaign. That’s not to say it’s all fluff, though – at its heart is solid roleplaying-lite gameplay and progression, including the Cheese System that allows its miniscule heroes to level up as they do battle with nasty pests and escape the terrifying feline menace of housecat Brodie.
Once they’re older: Hawthorne took his fairytale-like children’s storytelling even further with literal game-inside-a-book Stuffed Fables earlier this year, weaving an enchanting tale of toys defending a young girl from nightmares. Once young players are ready to write their own stories, it’s not too big a leap to RPGs such as Dungeons & Dragons or the board-gamified legacy roleplaying of Gloomhaven.
Buy your copy here 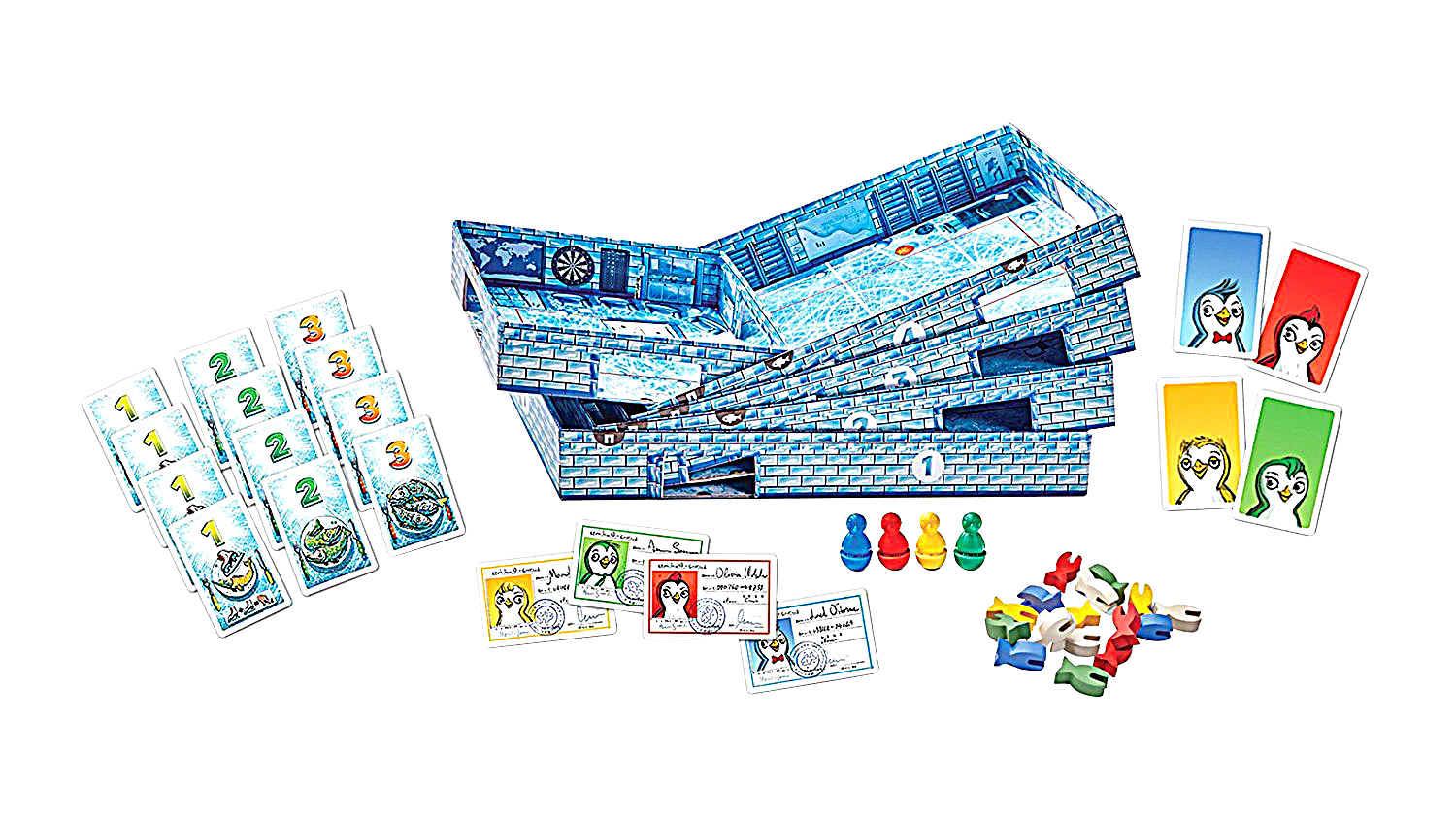 It’s cool in school! Literally in the case of Ice Cool, which sees penguin students skate around their chilly classrooms and hallways in pursuit of – what else? – delicious fish. Being flightless, the only way for the penguins to get around is by being pinged by a player’s finger, which sends them skidding around the school, trying to pass through tight doorways to gobble up the fish. One player must instead take on the role of the hall monitor trying to stop the misbehaving penguins from causing chaos, earning points for each naughty bird they catch. Ice Cool is very simple to play, but it takes a lot of skill to get your penguin to go exactly where you want, as they curve, zoom in straight lines and even hop over walls – sometimes even when you mean them to!
Once they’re older: Can’t get enough of pinging things with your fingers? Flick ‘em Up! swaps the snow and ice for the dusty plains of the Wild West, as players face off in a bullet-firing showdown of dexterity and careful aim. If you’d rather work together, Flick ‘em Up: Dead of Winter is a suitable co-op alternative – just watch out for those zombies.
Buy your copy here 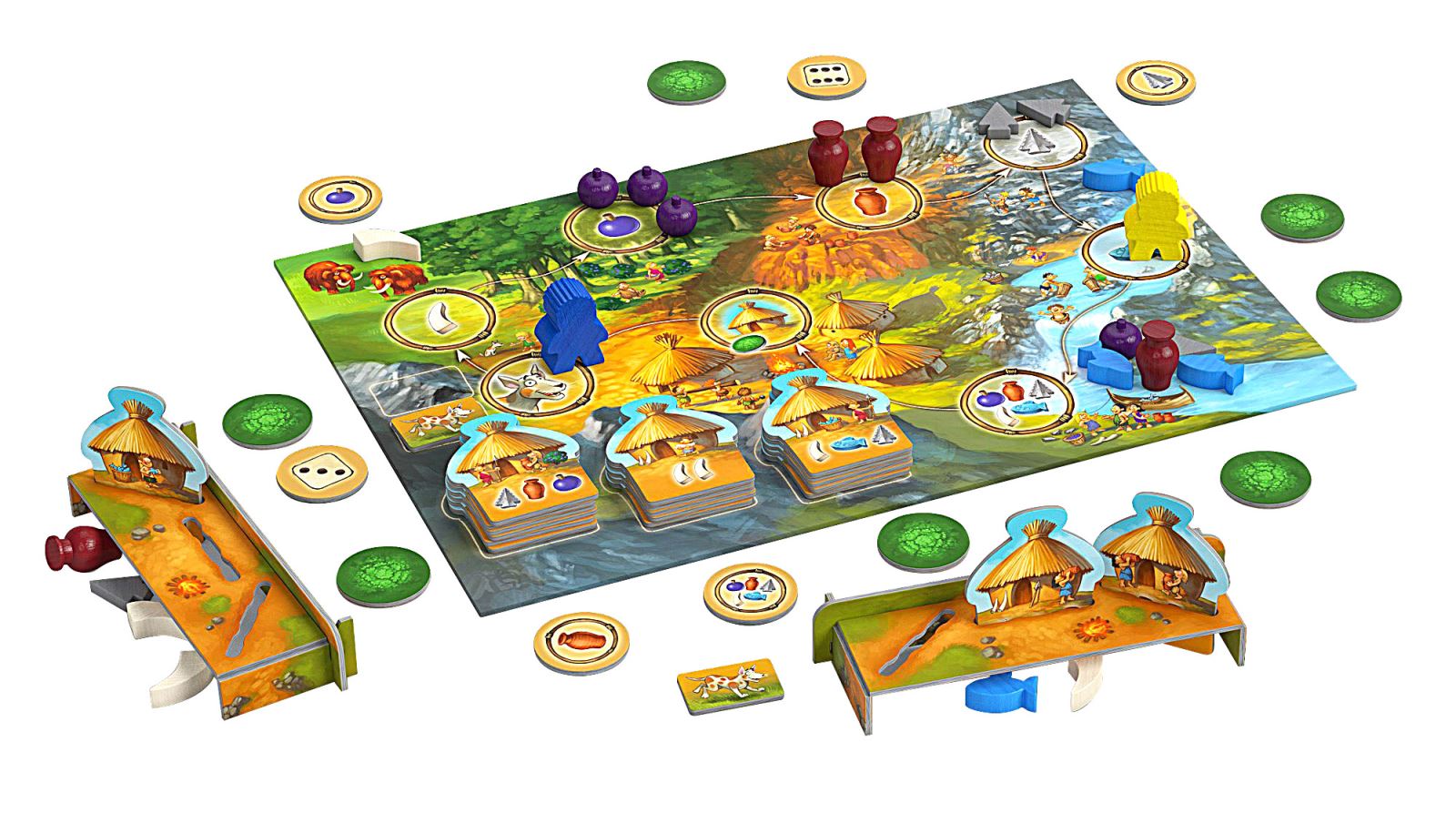 Based on the acclaimed worker-placement game, My First Stone Age offers up a similar loop of collecting goods and building a settlement, but is much easier for younger players to understand and takes only a fraction of the time, with games wrapping up in just 15 minutes or so. There’s more of a focus on memorisation than in the original Stone Age, with the dice replaced by tiles that provide movement – making it less of a reliance on luck. With a winning theme (who doesn’t love cavepeople?!) and a light introduction to mechanics found in other staples of the tabletop, it’s a great gaming stepping stone.
Once they’re older: The original Stone Age plays much longer and is a bit more complex, but has more to dig into for older players thanks to its worker-placement and dice-rolling core. If you’re looking for another fantastic worker-placement option with a theme sure to delight everyone regardless of age, Raiders of the North Sea and its Vikings should be right up there.
Buy your copy here 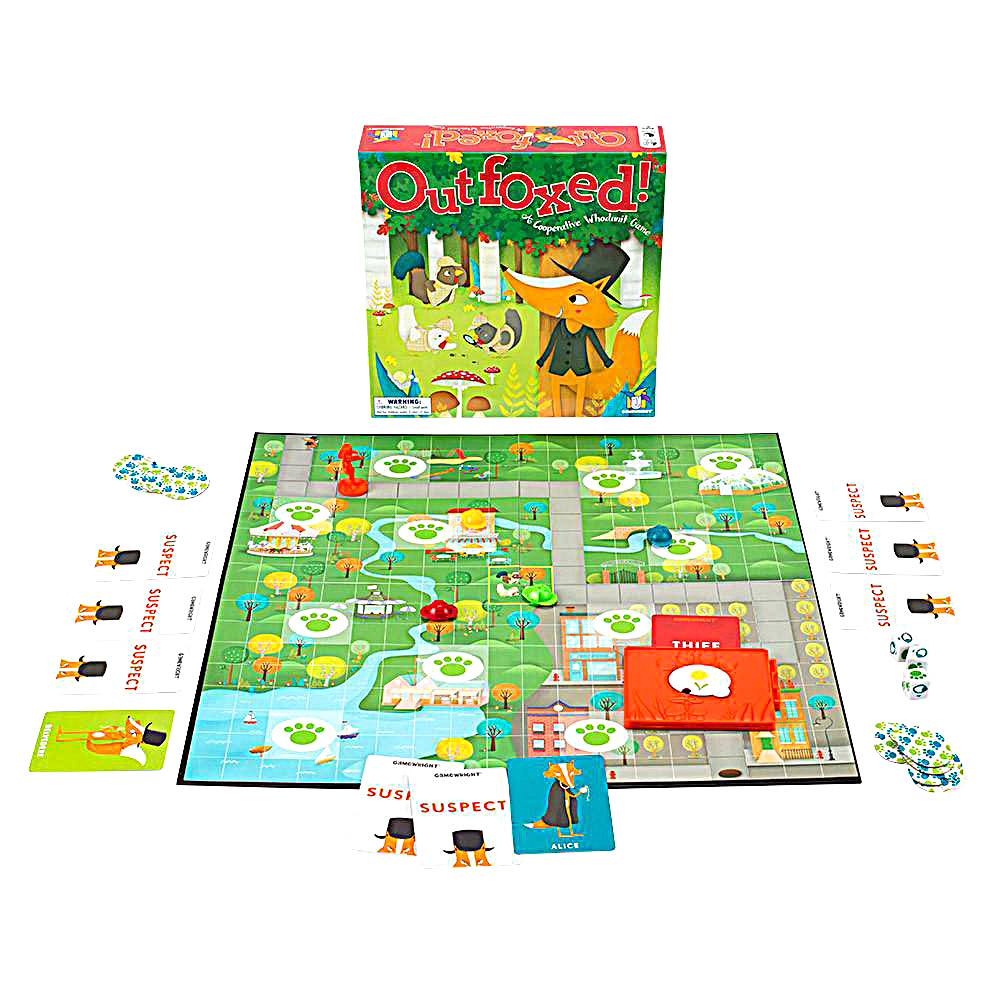 Fantastic Mr Fox meets Cluedo (but without that unpleasant murder business), Outfoxed! is a game of deduction and mystery suitable for even the youngest players. Mrs. Plumpert’s delicious pot pie has vanished, and now you need to gather clues and eliminate suspects to catch the dastardly fox responsible. To do so, you’ll move around the board and use the evidence scanner to work out who’s innocent – and who isn’t. Everyone’s working together to crack the case, and you’ll need a mix of luck and memory to triumph.
Once they’re older: Fans of entertaining deduction games that require fancy scanners should take a look at the recent app-powered remake of ‘70s classic Stop Thief! Another animal caper that relies on memory and deduction can be had in the competitive Purrrlock Holmes: Furriarty’s Trail, while the world’s most famous detective has never been better realised on the tabletop than in Sherlock Holmes: Consulting Detective. (Just steer clear of the decidedly non-child-friendly Jack the Ripper cases.)
Buy your copy here 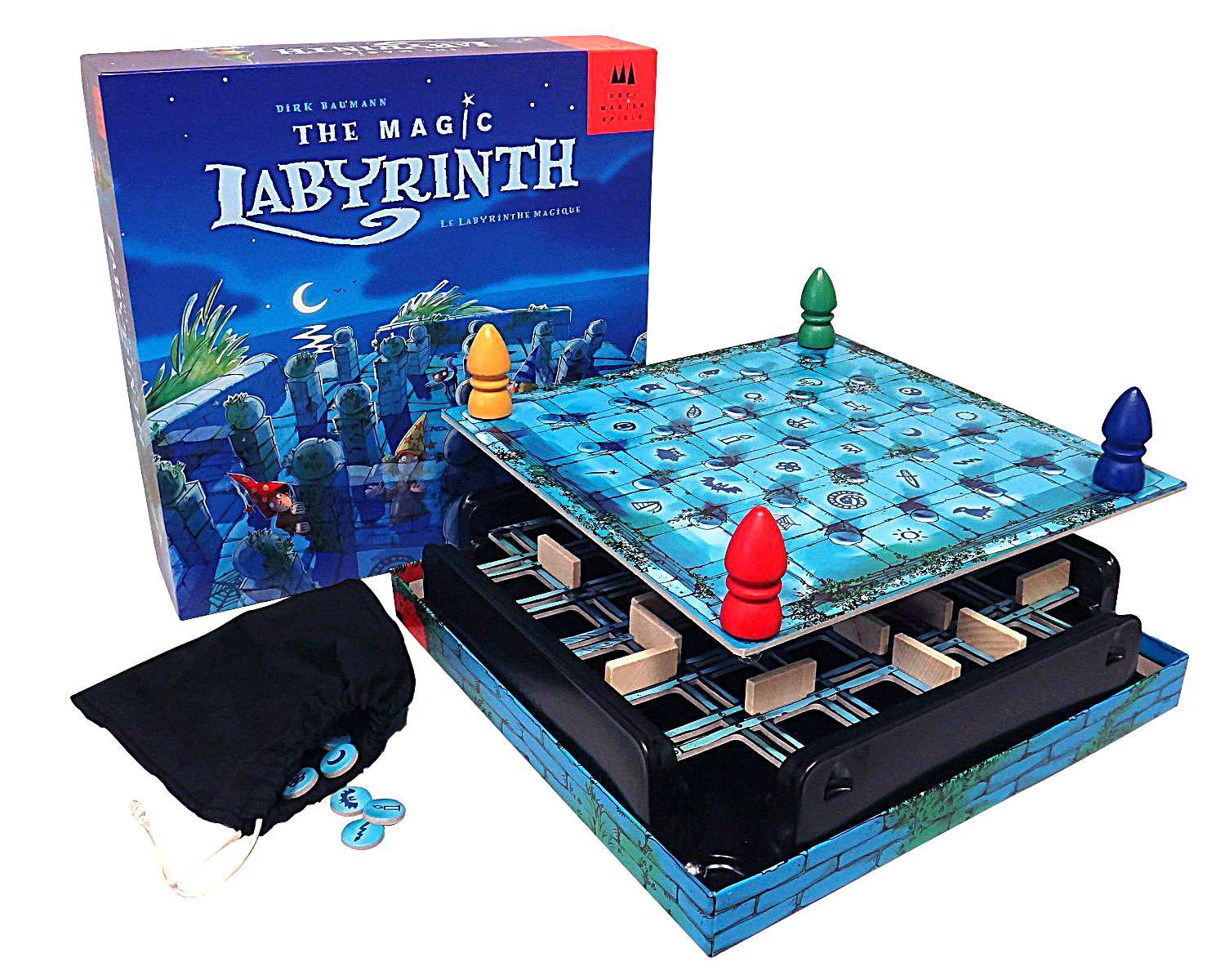 What’s the magic secret? Well, here it’s good ol’ magnets, which provide one of the most unique memory challenges out there. Players are trying to navigate a maze to collect lost magical objects, with the twist being that they can’t see its walls, which are hidden underneath the game board. They drag their magnetic magicians around the board to move the metal balls hovering underneath, but must go back to their corner if they hit an invisible wall. It’s as magical as it seems, and there’s nothing quite like it.
Once they’re older: It might not have the fun of magnets and wizards, but card game Hanabi is a fantastic test of memory that’s easy to pick up but tough to perfect. Older players looking for a tense and atmospheric experience involving navigating a hidden route of a very different kind will find plenty to keep them gripped in Jack the Ripper cat-and-mouse chase Whitehall Mystery.
Buy your copy here 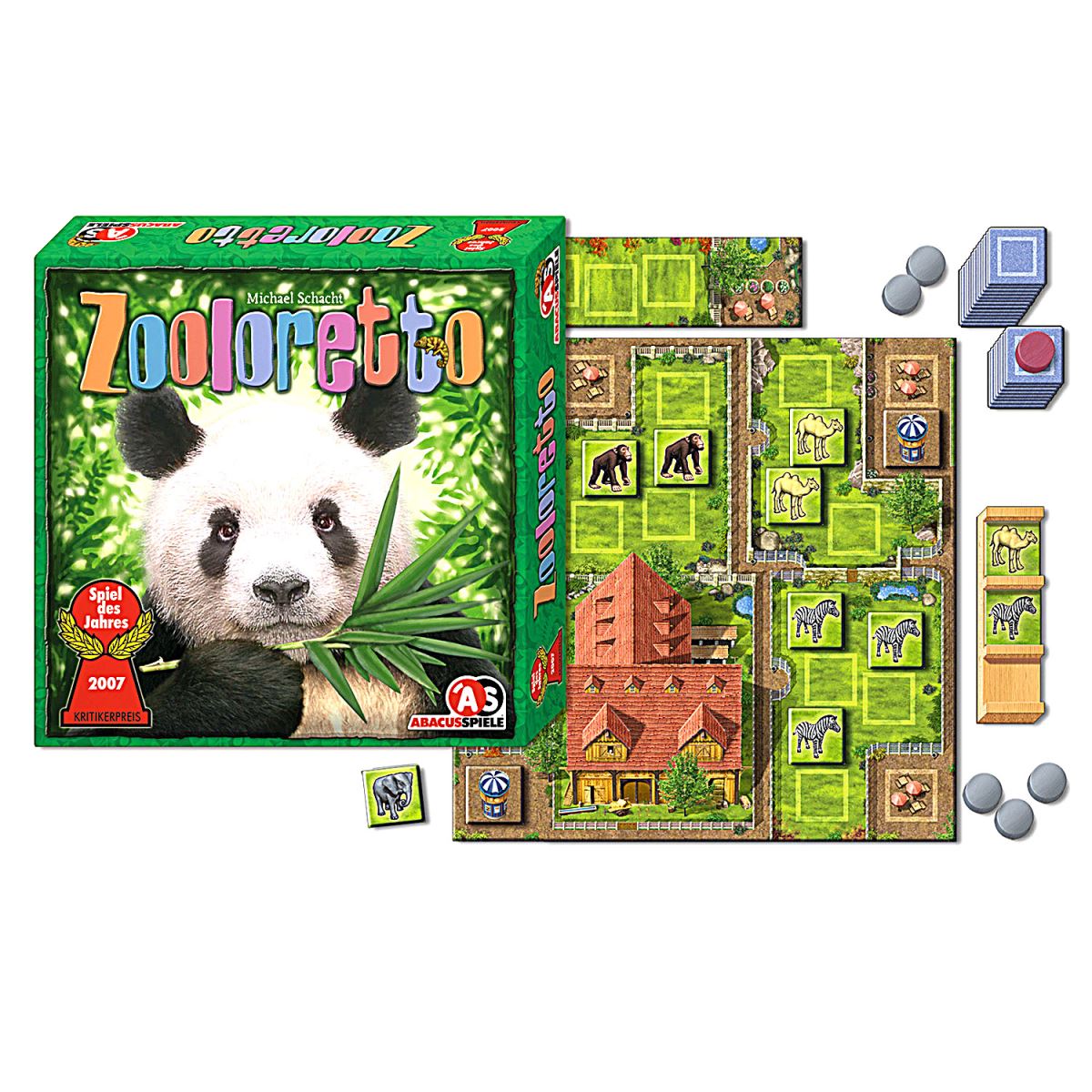 A fast and furry-ous game of set collection and tile-placement, Zooloretto sees players managing a zoo. You can’t have a zoo without animals, so players must fill their park with all creatures great and small, wild and exotic, to attract as many visitors as they can. Take in more animals than you can hold, though, and you’ll begin to lose points, meaning carefully filling – but not overfilling – enclosures is key.
Once they’re older: Bärenpark is the ideal pick for those with a soft spot for grizzlies or koalas, as well as being a more advanced (but not too complicated) tile-placement game about carefully organising your animal park. If the management aspects have you hooked, Dinosaur Island’s prehistoric residents offer up a challenging juggling of excitement and threat to keep visitors pouring through the gates – until it all goes a bit Jurassic Park, that is.
Buy your copy here 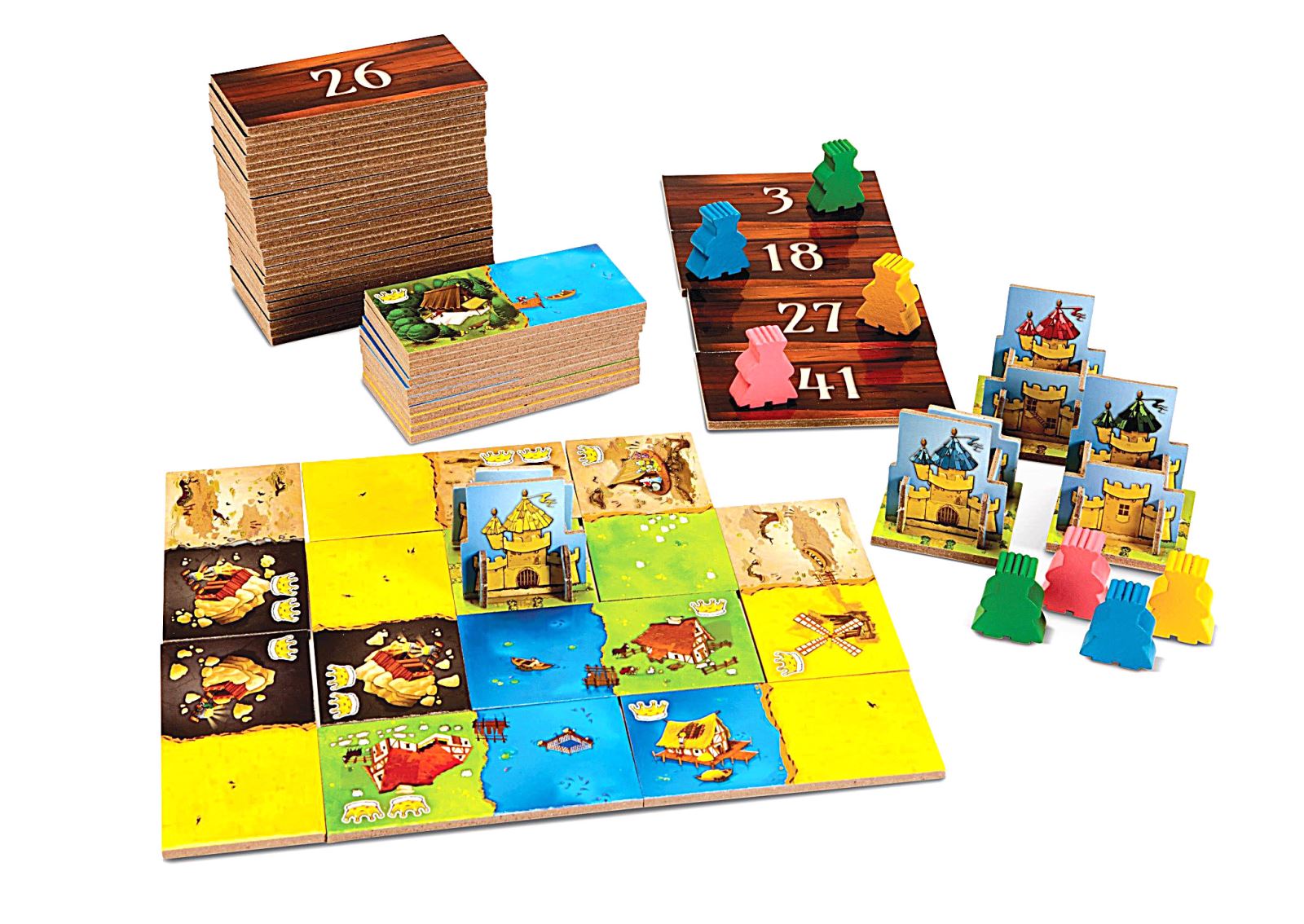 A new spin on a (very) old favourite, Kingdomino transports the arrangement of dominoes to a fantasy land filled with castles, wizards, dragons and knights. Players choose which domino they want to add to their kingdom, expanding a land made up of various different environments. Putting together matching squares of terrain, multiplied by the number of crowns in the region, racks up points at the end of the game. It’s simple, quick and charming as all heck, and deserving of a space on any shelf, old or young.
Once they’re older: Queendomino is a superior successor, but it’s also a little more complicated and maths-heavy due to the addition of buildings. Luckily, it can be combined with Kingdomino for the perfect royal couple, so you won’t lose out by picking up its simpler counterpart first. Both games serve as an alternative or introduction to a classic of board gaming, Carcassonne, which remains just as brilliant to play years later.
Buy your copy here

Completely original, completely chaotic, completely hilarious: Magic Maze is a bonkers co-op game played in real time as a timer ticks away. Players can’t speak or communicate for most of the game, having to use a big red pawn to try and get across their intentions as they control a group of fantasy adventurers trying to find their equipment in a shopping centre. That’s especially tricky, because every player can only move the characters in one or two set directions, making it a riotous task to get them where they need to be. The timer lasts for three minutes but can be turned over at points during each scenario – you’ll need the extra time. Very silly and massively entertaining, this is a maze you’ll want to get lost in.
Once they’re older: If racing against time is up your street, Escape: The Curse of the Temple uses a soundtrack to keep the tension high as players work together to flee a collapsing ruin. An out-of-this-world option is real-time sci-fi survival game Space Alert – but, unlike Magic Maze’s silent bedlam, in space everyone can hear you scream.
Buy your copy here

This article was featured in the May 2018 issue of Tabletop Gaming. Pick up the latest issue of the UK's fastest-growing gaming magazine in print or digital here – or subscribe to make sure you never miss another issue.